The unseeded Cadets, behind goaltender Tommy Aitken, defeated the Huskies 3-2 to reach the Class 2A semifinals. 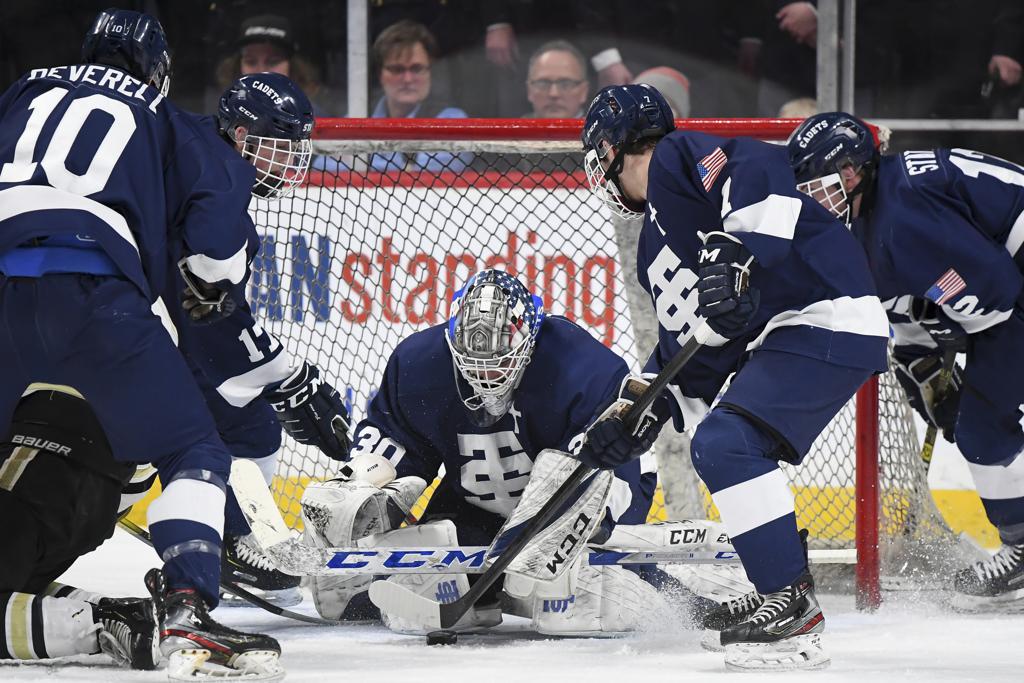 At one point this season, St. Thomas Academy was drowning in both losses and disbelief. A players’ meeting was held, a commitment to one another was forged and the seeds of one of the biggest upsets in recent state tournament history were planted.

“When we were 5-7 in February or January or whenever it was, we went over to one of the guys’ houses and talked everything out,” said goaltender Tommy Aitken, who made 33 saves — 15 in the third period — as the ringleader of the unseeded Cadets’ stunning 3-2 victory Thursday over No. 1 seed Andover (24-4-1). “We all just decided to buy in. I think that’s what changed everything around.”

Buy-in for the Cadets (19-8-2), the No. 5 seed in the Section 3 tournament and bearer of the most losses of any team entering the tournament, means five guys packing into the slot, all of them within a stick’s length or so from their goaltender. Buy-in means sacrificing to block a shot.

St. Thomas Academy did all of that in engineering the first quarterfinal upset of a No. 1 seed since Lakeville South stunned Duluth East 3-2 in 2012.

“We were doing everything right; we just couldn’t get the right bounces and get the puck to go in,” said Gunnar Thoreson, who scored a first-period goal for the Huskies, making their first state tournament appearance.

Second-period goals by Will Soderling and Jared Wright allowed St. Thomas Academy to take the 3-2 lead, and most of the rest of the game was played in the Cadets’ end. The Huskies outshot the Cadets 35-16.

“We fended them off, for sure,” Eigner said. “But by no means was that our strategy.”

Second-period goals by Will Soderling and Jared Wright helped unseeded St. Thomas Academy rally from a one-goal deficit and secure the biggest upset of the state tournament so far, a 3-2 triumph over No. 1 seed Andover in a Class 2A quarterfinal on Thursday at Xcel Energy Center in St. Paul.

Hunter Jones gave Andover a 2-1 lead 30 seconds into the second period, but the goals by Soderling and Wright put the Cadets in front for good.

Andover goaltender Will Larson finished with 13 saves. The Huskies outshot the Cadets 35-16.

Ranked No. 1 in Class 2A for much of the season, Andover (24-4-1), making its first state tournament appearance, had won 15 consecutive games entering the tourney.

St. Thomas Academy (19-8-2), the No. 5 seed in the Section 3 tournament, had the most losses of any team entering the tournament.