Hermantown embraces its 'Edina of the North' status

Cheered by many when it took on then-Class 1A power St. Thomas Academy, the Hawks have become less lovable to many with their ongoing run of success. 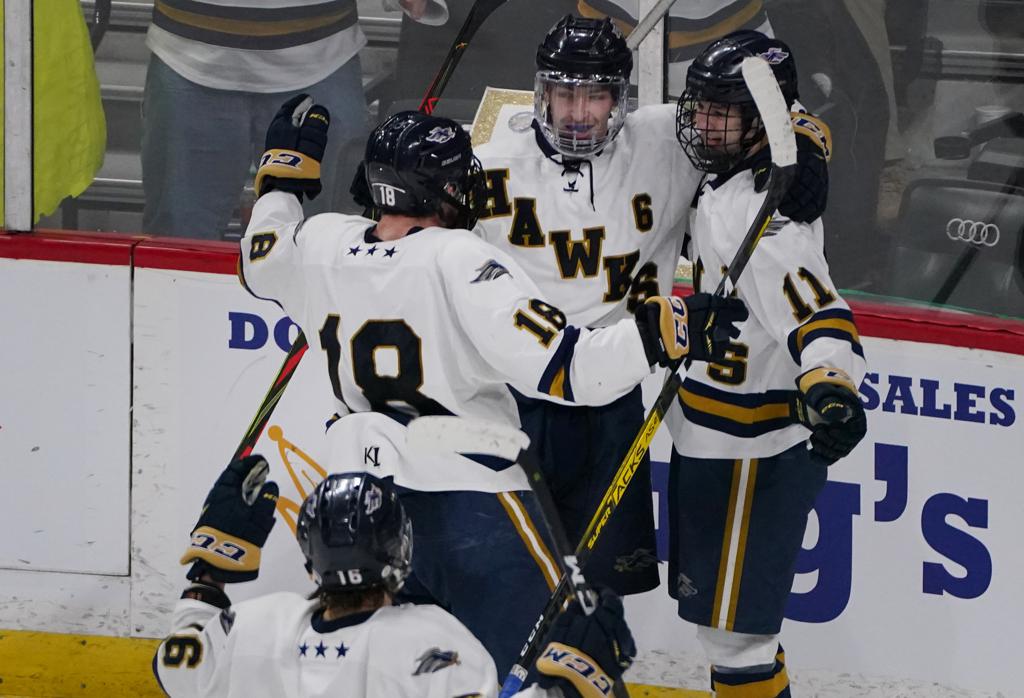 Maybe after the Hawks won the Class 1A title in 2016? For sure after they went back-to-back with championships in 2017.

These days, the Hawks are a virtual punching bag on message boards and social media, accused of everything from recruiting to sandbagging. A new low, or high, according to Biondi and Hermantown coach Pat Andrews, is the moniker “Edina of the North.”

“We take that as the ultimate compliment,” said Biondi, the Hawks senior forward and Mr. Hockey finalist. “Like Coach always says, ‘It’s everyone’s Super Bowl when we play them.’ ”

When St. Thomas Academy ruled small-school hockey, winning three consecutive titles from 2011 to 2013, fans cheered with vigor for the Hawks to take down the evil empire. That rivalry reached its apex when the furry, beaked head of the Hawks mascot somehow ended up in the St. Thomas Academy student section, where it was bounced skyward from fan to fan like a beach ball.

St. Thomas Academy opted to play up in Class 2A in 2013-14, leaving Hermantown as the new undisputed bully of the small schools. The Hawks had appeared in nine consecutive state tournaments — and eight championship games — until last year, when they were stunned by Greenway in the Class 1A, Section 7 championship game much to the delight of fans who adopted the Raiders as their new northern darling.

Hermantown resumed its small-school dominance this season, winning its three section playoff games by a combined score of 27-1. The Hawks (22-3-4), who play St. Cloud Cathedral in a Class 1A tournament semifinal Friday, opened the tournament Wednesday with a 7-1 quarterfinal thumping of Monticello.

Edina, the “cake eaters” from one of the state’s wealthiest communities, have won 13 championships, including three as Edina East. The Hornets have won four of their titles since 2010.

“You know you are doing something right when you are being compared to Edina,” Andrews said, adding that the Hawks “are getting crucified” for not following St. Thomas Academy’s lead and moving up to Class 2A.

“In some ways, it’s making Class A relevant for having the good teams stay,” he said. “We’re OK with the status quo. Everyone pushing so hard to catch us in our section, the teams are becoming so much better.”

Biondi said the Hawks, for the most part, tune out all the “noise” from their detractors.

“People say we recruit,” said Biondi, who scored three goals in Wednesday’s victory over Monticello. “We don’t recruit. We just sit and laugh at that stuff.

“And what’s funny is they don’t realize that’s only fueling our fire. I love it. That is my favorite thing about being a Hermantown Hawk.”