The Cadets had rallied with two third-period goals to tie the game 2-2 until the Pioneers' Charlie Strobel scored with 22 seconds left in the extra session. 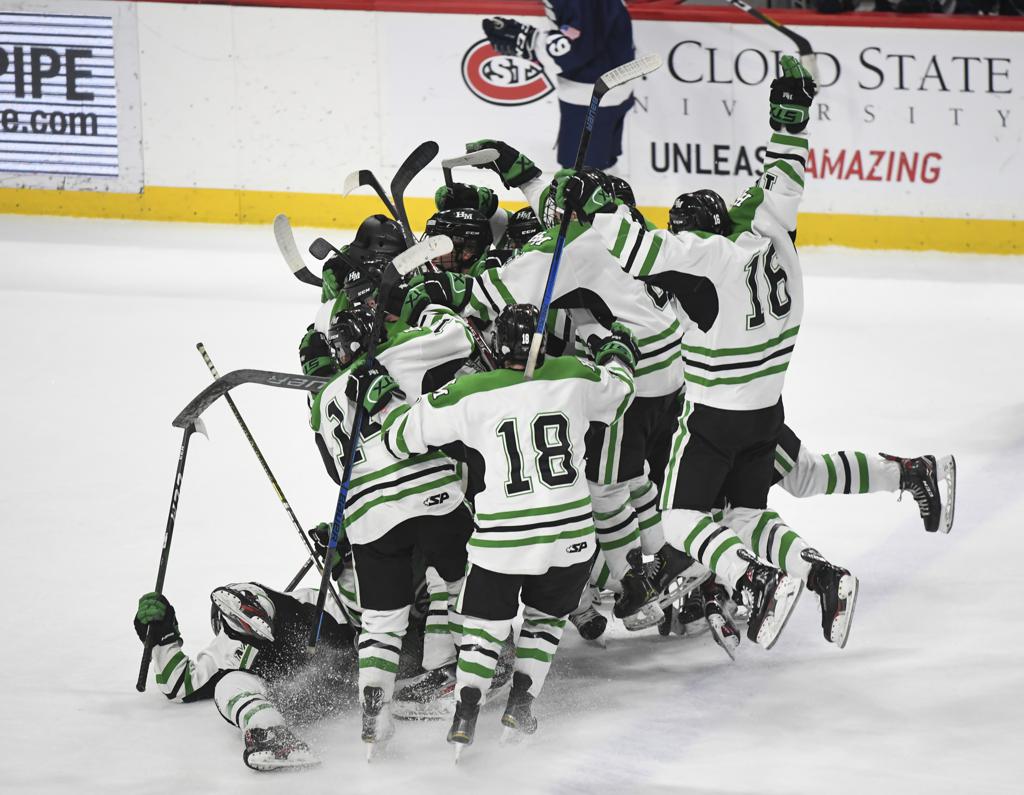 An extra period of hockey was required. But Saturday’s Class 2A championship game is set.

Hill-Murray defeated St. Thomas 3-2 in overtime of the second semifinal Friday at Xcel Energy Center on a goal scored by Charlie Strobel with 21.4 seconds left.

“It’s an unbelievable feeling,” Strobel said. “This is a tight group so it felt great to get it in the back of the net.”

No. 4 seed Hill-Murray (21-6-3) toppled St. Thomas Academy (19-9-2) and advances to the championship game for the 11th time in program history and first since 2013. The Pioneers are 3-7 in title games with their last victory coming in 2008. They will face Eden Prairie, runner-up last season.

A 2-0 Hill-Murray lead at first intermission owed to Dylan Godbout’s work on the power-play. He scored twice with the Pioneers holding a man advantage, part of a 11-5 Hill-Murray edge in shots on goal in the period. Nick Pierre was credited with assists on both goals.

Success Thursday played a role in St. Thomas Academy’s slow start Friday. The Cadets upset Andover, the first time a team had ousted the No. 1 tournament seed home in a quarterfinal since 2012.

“We were probably a little emotionally fatigued in the first period, and understandably so,” said Trent Eigner, in his first year as Cadets coach.

The Cadets appeared to get a bounce in the second period when Will Soderling scored from near center ice. But video review confirmed a teammate had not vacated the zone and the resulting offside call nullified the goal.

There was no overturning Riley O’Brien’s goal scored just 59 seconds into the third period.

Teammate Charlie Killian’s power-play goal at 9:43 of the third period was the equalizer.

The Cadets persevered despite sitting at 5-7-2 earlier this season and holding the No. 5 seed in the Section 3 playoffs.

“I’m not surprised we put ourselves in this position because we worked hard all season,” said Eigner, whose team was on a 10-0 run until Friday.