The Eagles got goals by Ben Steeves and Jackson Blake, both of whom joined the team this year, en route to a 4-1 victory and another shot at a Class 2A championship. 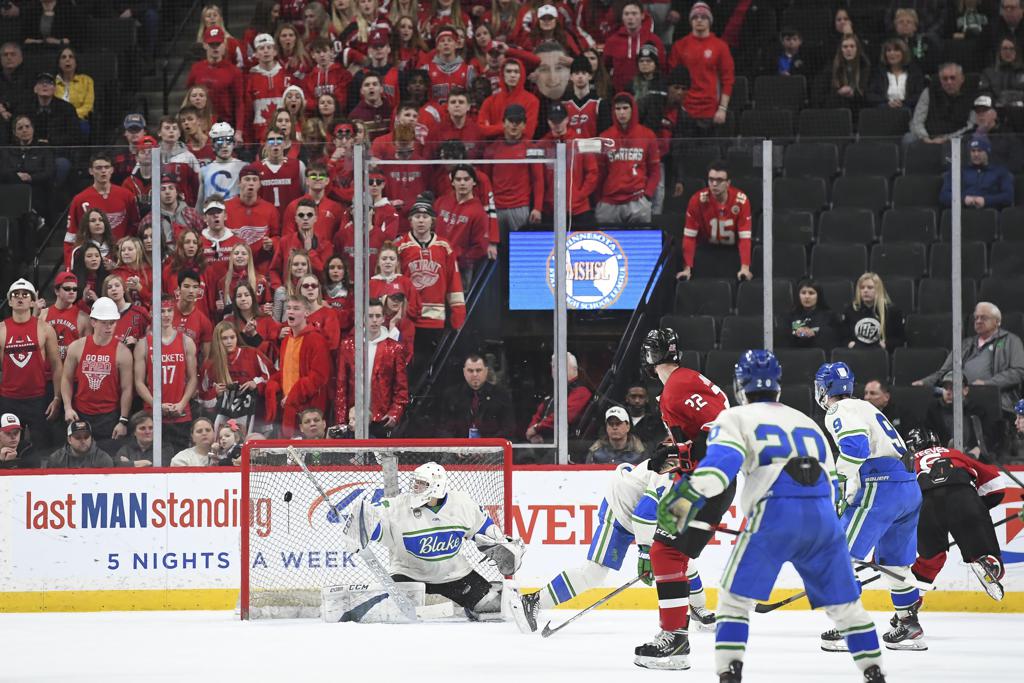 The bouncing pucks in the crease were impossible to corral. Wild scrambles that almost always result in goals yielded nothing. Shots headed for upper corners or the inside of the posts never made it that far.

“Pucks were bouncing all over, guys were throwing their bodies in front of everything,” Blake coach Rob McClanahan said Friday after his No. 2-seeded Bears lost 4-1 to No. 3-seeded Eden Prairie in a Class 2A semifinal at Xcel Energy Center in St. Paul. “It was a spectacular game.”

A duel between goaltenders Axel Rosenlund for Eden Prairie (24-5-1) and Aksel Reid for Blake (23-7-0) — they combined to make 62 saves — finally was interrupted when senior Ben Steeves scored to put Eden Prairie ahead 1-0 with 41 seconds left in the second period.

“We knew we were going to score eventually, because that’s how we are, we’re persistent,” said Steeves, a Mr. Hockey finalist who has three goals in the tournament and 36 for the season.

Defenses loosened after Steeves’ goal. But a game many thought would resemble a back-and-forth, whoever-scores-last affair never materialized. 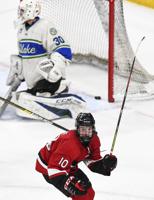 “Sometimes you get games like that where it is 8-6,” McClanahan said before glancing at the sweat-stained Reid in the postgame media session. “But this young man played the game of his life. And their goalie played a tremendous game.”

Reid finished with 30 saves, including 25 in the first two periods. Rosenlund had 32 saves, 24 of which came in the final two periods.

Rosenlund was Eden Prairie’s starter in last year’s state tournament, helping the Eagles reach the championship game before losing in overtime to Edina.

“We had to go with the experience of Axel when it was all said and done down the stretch,” said Eden Prairie coach Lee Smith. “He’s a senior, and having been here before, you can just tell.”

Rosenlund, who split time in goal with junior Eli Andrews during the regular season, had 29 saves in a shutout against Lakeville South on Thursday. He held Blake scoreless until Thomas Nelson’s deflection got by him with 3:12 left. The goal pulled the Bears to within 2-1, but John Mittelstadt and Drew Holt scored in the final two minutes.

Sophomore Jackson Blake also scored for Eden Prairie, which avenged a 5-4 loss to Blake in the regular season.

“I didn’t even know it went in until five seconds after,” said Blake, who didn’t join the Eagles’ varsity until late in the season because of eligibility issues incurred because of a mid-winter transfer last year from Shattuck-St. Mary’s in Faribault to Eden Prairie. “I saw the boys chasing after me.”

Eden Prairie will play in its third title game in five years. The Eagles won championships in 2009 and 2011.

Eden Prairie broke open a scoreless game through two periods with four goals to defeat Blake in a Class 2A semifinal Friday at Xcel Energy Center.

Ben Steeves and Jackson Blake, two of the Eagles’ three additions this season, came through with the necessary offense. Steeves' goal broke a scoreless tie in the second period and Blake made it 2-0 with a goal in the third period.

The 4-1 victory send No. 3 seed Eden Prairie (24-5-1) back to the Class 2A championship game. The Eagles fell in overtime last season.

Eden Prairie’s John Mittelstadt gave his team a 3-1 cushion with a late goal.

Drew Holt scored on an empty net with 9.3 seconds left after the Bears had pulled their goaltender for an extra skater.