The Zephyrs jumped out to a 2-0 lead before Adam Johnson scored twice in the second period en route to a 5-1 victory. 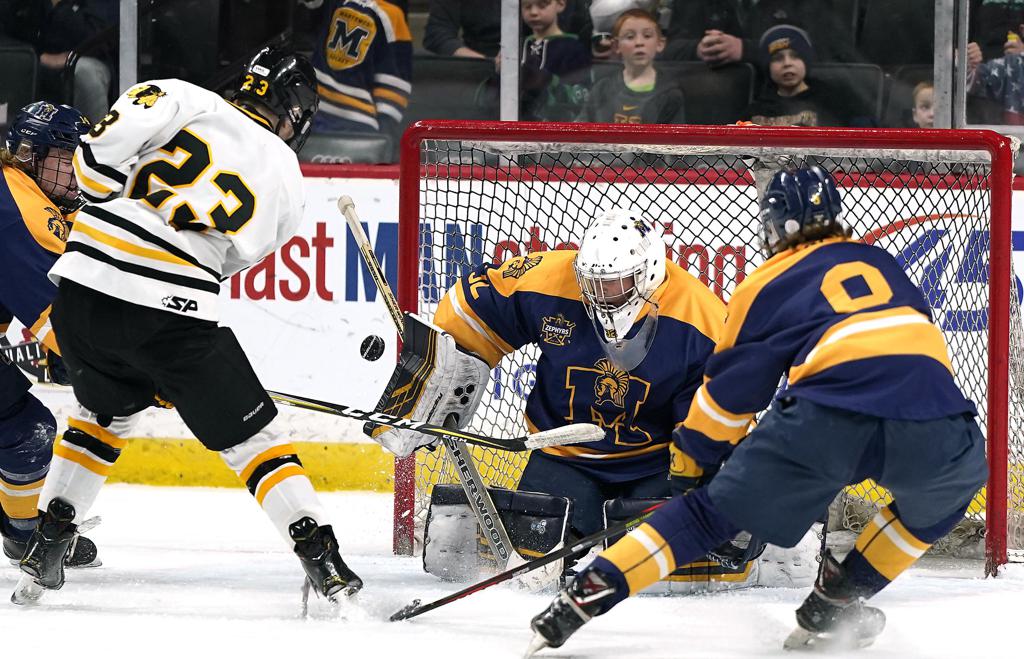 Miss and he would be in trouble with his coaches. Maybe get a tongue-lashing. Or worse.

Mahtomedi’s Adam Johnson didn’t have a lot of time to consider the consequences as he burst down the right side and into the Warroad zone. So he picked his favorite corner — “short side high,” he said — and fired.

Johnson scored twice in the second period, the goals coming in almost identical fashion, as he led the No. 4-seeded Zephyrs past No. 1 seed Warroad 5-1 in a Class 1A semifinal at Xcel Energy Center in St. Paul.

The victory sends Mahtomedi (22-8-0) to its first championship game appearance in 12 state tournament trips. The Zephyrs had lost in the semifinals five times, including twice in the previous two years, before finally breaking through against the Warriors (27-3), the top-ranked team in Class 1A.

“We had different type of mentality going into the season,” said Johnson, referring to Zephyrs coach Jeff Poeschl’s preseason meeting in which he said he “named the elephant in the room.”

Poeschl’s message, in so many words, was that reaching the state semifinals, while impressive, was no longer good enough.

Johnson’s progression from the JV to varsity bit player last season to goal-scoring mainstay now is a big reason for Mahtomedi’s breakthrough. His two goals gave him 17 this season.

“He’s probably as close as we have to a natural goal scorer,” Poeschl said. “For him to have that confidence and be able to find the back of the net is critical for the success of our team.”

Johnson was smiling as he returned to the bench after each of his goals, trading laughs with the Zephyrs’ coaches after hitting openings the size of a tea cup.

Junior forward Adam Johnson scored twice and sophomore goaltender Ben Dardis made 29 saves as No. 4 seed Mahtomedi reached a state championship game for the first time in program history with a 5-1 upset of top-seeded Warroad on Friday in a Class 1A semifinal at Xcel Energy Center in St. Paul.

Johnson scored early and late in the second period as the Zephyrs (22-8-0) outscored the Warriors 3-1 to build on their 2-0 first-period lead.