Hermantown too much for defending 1A champion St. Cloud Cathedral

The Hawks claimed a 6-2 victory in a game that included a skirmish at the end of the first period that sent seven players to the penalty box. 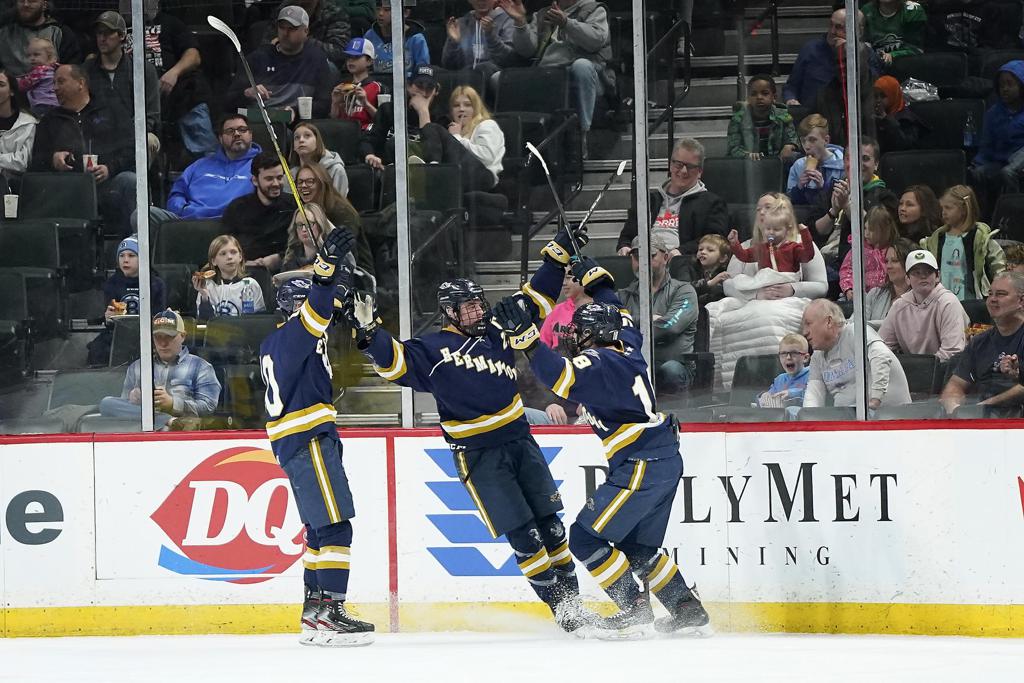 Hermantown built a three-goal lead to start the semifinal Friday against St. Cloud Cathedral. Whether the Hawks could finish became the critical question.

They had been here before, blowing big leads in an eventual tie with the Crusaders in January. Hawks coach Patrick Andrews dismissed the stalemate as “ancient history” and his players proved him correct.

A 6-2 takedown of the defending Class 1A state champion Crusaders brought Hermantown a minor upset in front of an announced record crowd of 12,836 fans.

“We play fast and we try to play physical,” Andrews said. “We’re hard to handle when we do that.”

Passionate hockey from both strong teams showed in the thundering checks that left strewn bodies on the ice. But Hermantown’s offensive prowess made the difference.

A fresh look to the boxscore started with junior Cole Antcliff, who missed the first Cathedral game, scoring his first goal this postseason. Andrews called the relentless Antcliff a “little ball of hate.”

Mr. Hockey Award finalist Blake Biondi, the focus of the Crusaders’ game plan, broke loose to make it 2-0 on his 47th goal of the season.

The extra attention on Biondi, combined with the Hawks’ desire to knock out Cathedral, led to trash talking. At the end of the first period players from both teams pushed, shoved and tackled opponents to the ice, resulting in seven players drawing penalties.

Senior forward Cayden Sunde padded the Hawks’ lead with his sixth goal of the season. The last player chosen for the varsity roster this season, Sunde earned his team’s player of the game honors. He replaced an injured Aydyn Dowd on the second line and blocked several shots.

“I didn’t think we had a doubt in our minds coming into the third period,” said Warner, whose team overcame deficits of 4-0 and 5-2 to salvage a 5-5 tie on Jan. 3 at Hermantown. “Everyone thought we could come back.”

Cathedral scored next. But trailing 3-2 was as close as the defending champions got to repeating history.

Two hockey teams that don’t like each other got together in a game almost anyone could love.

No. 3 seed Hermantown (22-3-4) led 2-0 after the first period on goals from Cole Antcliff and Blake Biondi.

The teams played to a 5-5 tie on Jan. 3 and some bad blood remained. As the first period ended Friday, players from both teams pushed, shoved and tackled opponents to the ice. A combined seven players were assessed penalties  but none were ejected.

Hermantown kept its edge in the second period, outshooting No. 2 seed St. Cloud Cathedral (24-3-1) 22-7. Cayden Sunde out the Hawks ahead 3-0. But a Nate Warner goal gave the Crusaders hope.

By the third period, fans filled the club level seats. The upper level was opened to accommodate additional fans.

When the teams played in January, the Crusaders overcame deficits of 4-0 and 5-2 to salvage the tie. But on Friday, the Hawks held tight to their lead. Joey Pierce knocked a puck home for a 4-2 edge at 10:54 of the third period.