The end of the first period was a rarity on high school hockey ice. Plus Axel vs. Aksel, a confidence-sapping goalie, three stars, three numbers, attendance and a quote of the day. 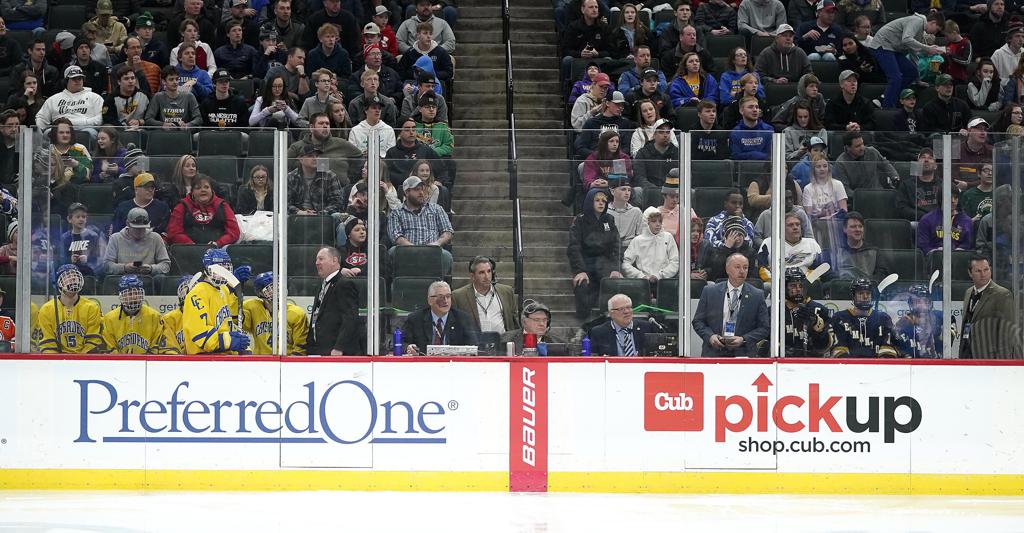 The penalty boxes for both teams were full in the second period after a dust-up at the end of the first period. Photo: Leila Navidi * leila.navidi@startribune.com

The horn to announce the end of the first period of the first Class 1A semifinal Friday also signaled 15 seconds of clutching-and-grabbing-gone-wild mayhem that is rarely seen at the high school level, much less the state tournament.

“There were some things that were said, probably, that generate that kind of energy,” St. Cloud Cathedral coach Derrick Brown said. “But I think both sides could have handled that situation better. I don’t think anybody wants to see that, especially in a high school athletic event.”

St. Cloud Cathedral’s game plan centered on bumping, jostling and aggravating Biondi all game. Hermantown, meanwhile, was focused on crashing and banging into the speedy, skilled Crusaders as often as possible.

Words were exchanged, then wrestling moves were unveiled as the concoction boiled over. Two 10-minute misconducts were among the 11 penalties called — six on Cathedral and five on Hermantown.

“We were very cognizant of being physical with them, and I don’t think they liked that very much, especially in the first period,” Hermantown coach Pat Andrews said. “I think their tempers got going a little bit.”

Karen Rosenlund said her son was named after his grandfather on his father’s side, Axel Marius Rosenlund. The elder Axel, who died on July 22, 1971, was the former mayor of Coeur d’Alene, Idaho.

“So no, he wasn’t named after Axl Rose, but I still like [Guns N’ Roses],” said Karen Rosenlund, a self-described “’80s chick.”

Shooting against Mahtomedi sophomore goaltender Ben Dardis in practice can sap the confidence from even the most accurate of shooters.

“Their goalie was unreal today,” Warroad freshman scoring phenom Jayson Shaugabay said about Dardis’ 29-save performance. It included a breakaway stop not long after the Warriors had cut their deficit in the Class 1A semifinal to 3-1.

“I’m not surprised,” Zephyrs coach Jeff Poeschl said about Dardis’ shutting down one of the state’s highest-scoring teams. “He does it every day in practice. In fact, the couple of guys that are sitting next to him have probably broken a couple of sticks in practice because of frustration.”

Billy Buttermore and Adam Johnson were seated on either side of Dardis in the postgame media session.

While Johnson has never broken his stick in frustration, he said Dardis “doesn’t let us get any easy goals in practice, so it helps us come and perform out here.”

By the numbers
6 -- Times Mahtomedi reached the state tournament semifinals before advancing. Four of the previous five losses came in overtime.
11 -- Penalties resulting from a scrum between St. Cloud Cathedral and Hermantown. No players were ejected.
11 -- Hermantown returns to the Class 1A championship game for the 11th time. The Hawks are 3-7 in those games.

Attendance: An announced record crowd of 12,836  attended the Class 1A afternoon semifinals. The evening Class 2A crowd was announced as 19,899.

Quote: “How sweet it is.” — Mahtomedi coach Jeff Poeschl on how it feels to finally reach a state championship game after four semifinal losses, three of them in overtime