The Zephyrs' Colin Hagstrom scored the game-winner for a 3-2 victory over Hermantown, which had tied the game in the final seconds of the third period. 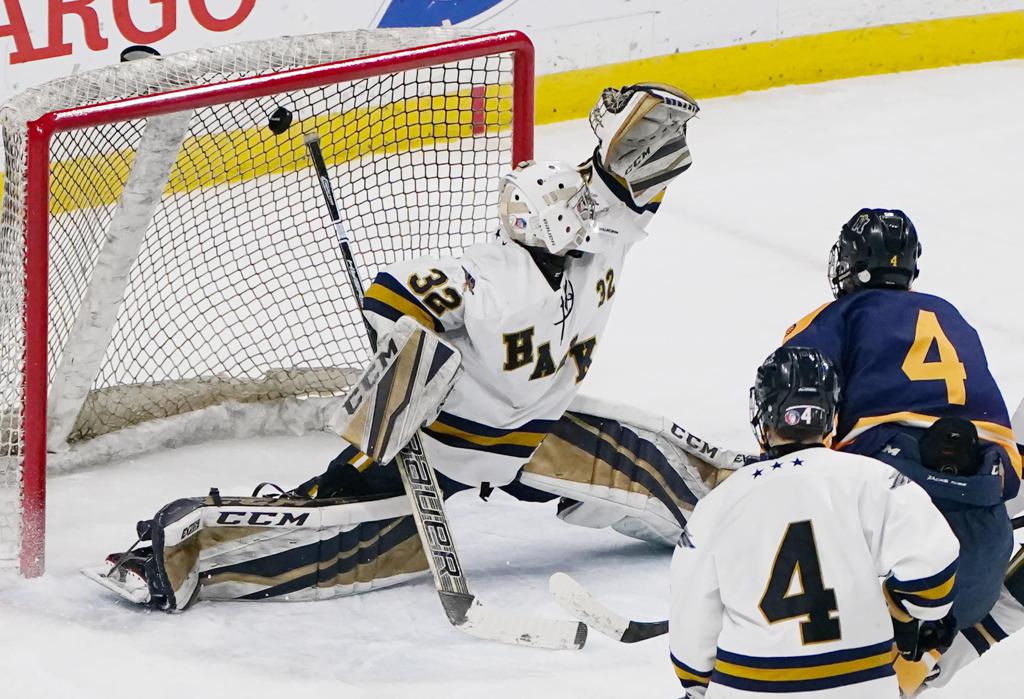 The Zephyrs blocked shots without fear, toiled on defense without tiring and held together when faced with overtime. Their reward came when senior forward Colin Hagstrom scored in the extra session for a 3-2 victory against northern power Hermantown and the program’s first Class 1A state tournament championship.

“Just like a family, you’re not always going to get along, but you’re going to have each other’s back,” said Poeschl, in his 23rd season as Mahtomedi’s head coach. “It doesn’t always work out that way. I’ve had some dysfunctional families. But this group bought in and committed to one another. They were willing to pay the price.”

Playing Saturday against a Hermantown team that pounded them 9-2 on Dec. 21, the Zephyrs suffocated the Hawks in the rematch. Power-play goals from JD Metz and Ethan Peterson provided a 2-0 lead.

No. 4 seed Mahtomedi (23-8) clung to a conservative style, finishing with 12 shots on goal and going a little more than 20 minutes without a shot on goal from mid-second period until 6:38 remained in the third period. Hermantown outshot the Zephyrs 42-12.

Poeschl acknowledged the large difference in shots on goals but countered, “when you look at quality scoring chances, I bet it wasn’t all the lopsided.” Sophomore goalie Ben Dardis made 40 saves.

“Their game plan was outstanding,” Hermantown coach Patrick Andrews said. “They played incredible team D. And I thought for the first half of the game, they wanted it more than us.”

“It’s the state championship so you wouldn’t think so,” Biondi said. “They came out hard and maybe outplayed us a tiny bit. But we came to play in the second half of the game.”

For stunned Mahtomedi, history wasn’t on its side. In 11 previous state tournament trips, the Zephyrs had lost in the semifinals five times. Semifinal appearances the past two seasons ended in overtime losses.

Not Saturday. Hagstrom, kept out of the lineup until Jan. 28 by a broken fibula, scored his third goal of the tournament and 11th of the season.

“That’s the amazing thing about this team, they weren’t down,” Poeschl said. “You can read a team and there was never that feeling of, ‘Oh man, now we don’t have a chance.’ It was, all right, let’s get after it. We’re going to need another goal.’ ”

1. Colin Hagstrom, Mahtomedi, senior forward: Made himself a Mahtomedi hockey trivia answer by scoring the overtime goal to give the program its first state championship.
2. Ben Dardis, Mahtomedi, sophomore goalie: Turned aside 40 of Hermantown’s 42 shots on goal — 22 in the third period alone — to make the Zephyrs bend-but-don’t-break defensive strategy hold up.
3. Jacob Backstrom, Hermantown, senior goalie: He saw only 12 shots, but most were of a high degree of difficulty. Or “Grade A’s” as the puck chasers like to call them. 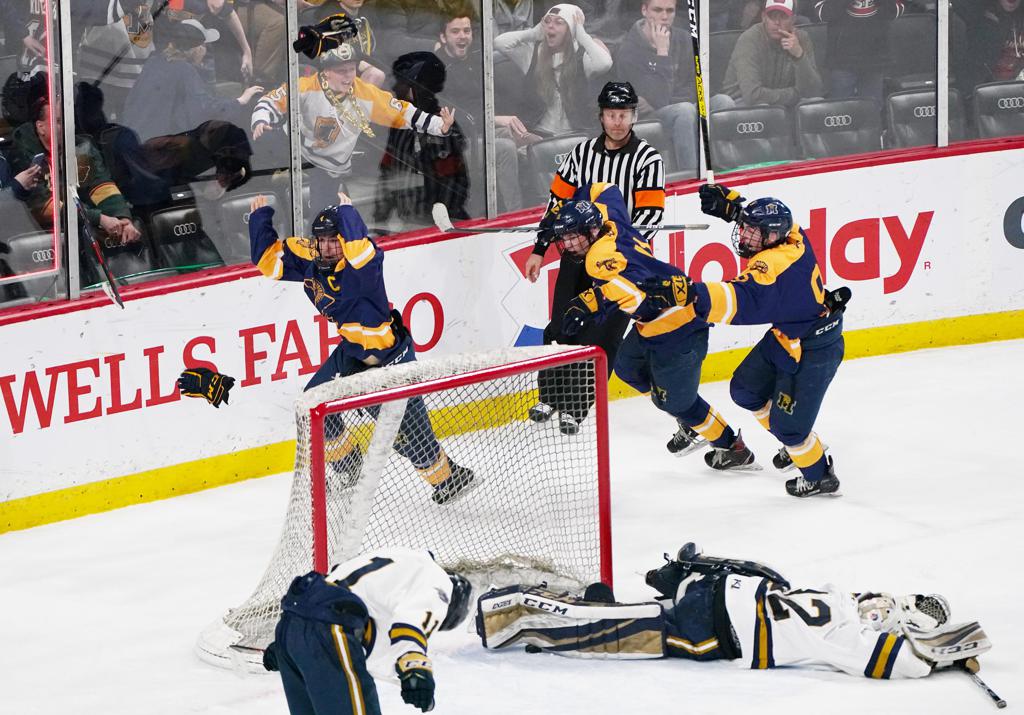 Mahtomedi forward Colin Hagstrom (4) celebrated with teammates in pursuit after he scored the championship-winning goal in overtime past Hermantown goaltender Jacob Backstrom (32) to give the Zephyrs a 3-2 victory. Photo: Shari L. Gross • shari.gross@star 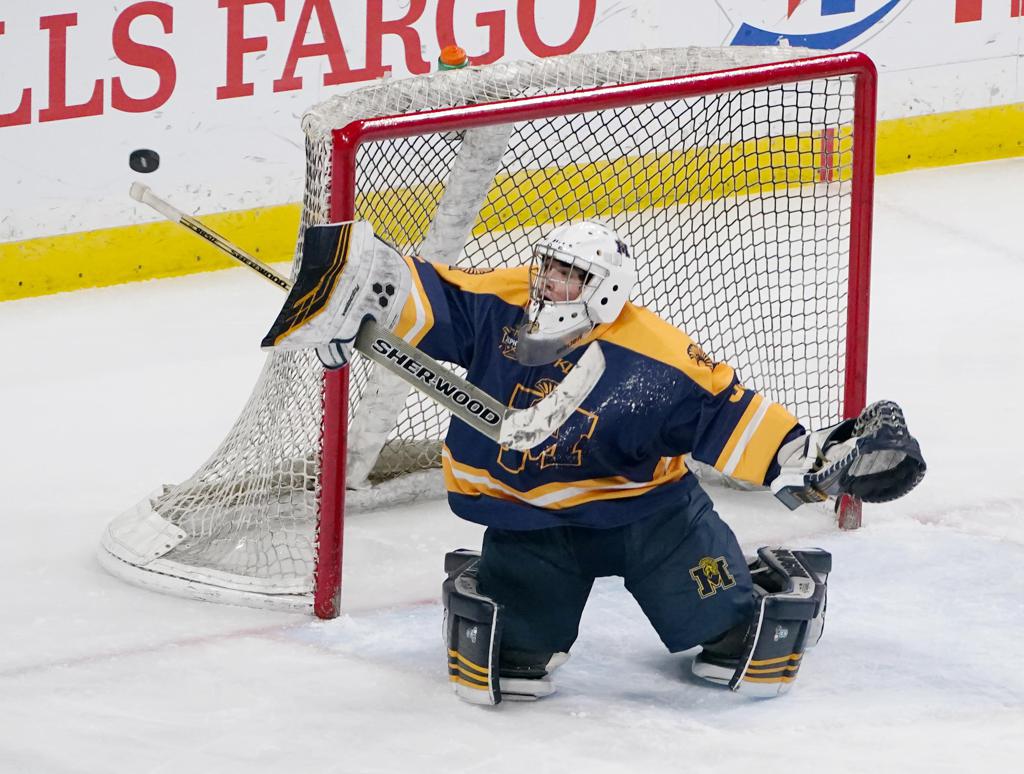 The Zephyrs, making their first title game appearance, defeated northern power Hermantown by a 3-2 score in overtime on Saturday at Xcel Energy Center.

No. 4 seed Mahtomedi (23-8) finished with just 12 shots on goal. The Zephyrs went a little more than 20 minutes without a shot on goal from the second period until 6:38 remained in the third period.

Their goaltender, Ben Dardis, made an unofficial 40 saves in the game.

No. 3 seed Hermantown (23-4-4) fought back from a two-goal deficit to force overtime.

A JD Metz power-play goal put Mahtomedi ahead 1-0 in a penalty-filled first period. A total of five infractions were called as each team got mileage out of their power play and penalty killing units.

Metz fired from the blue line and the puck deflected off the stick of Hermantown’s Indio Dowd and past goaltender Jacob Backstrom.

A second Mahtomedi power-play goal, this time Ethan Peterson burying a nice feed from Metz, made it 2-0 at 1:47 of the second period.

Hermantown butted its way back into the game. Defenseman Drew Sams threw the puck toward the slot and it deflected off Metz’s backside and past the Zephyrs' Dardis at 11:41 of the second period.

Aaron Pionk tied the game for Hermantown with 21.2 seconds left in regulation.