Jackson Blake's talent is crystal clear, even if shot isn't

The Eden Prairie sophomore, who has verbally committed to North Dakota, has shined since joining the Eagles. His goal Friday in the 2A semifinals proved to be the game-winner. 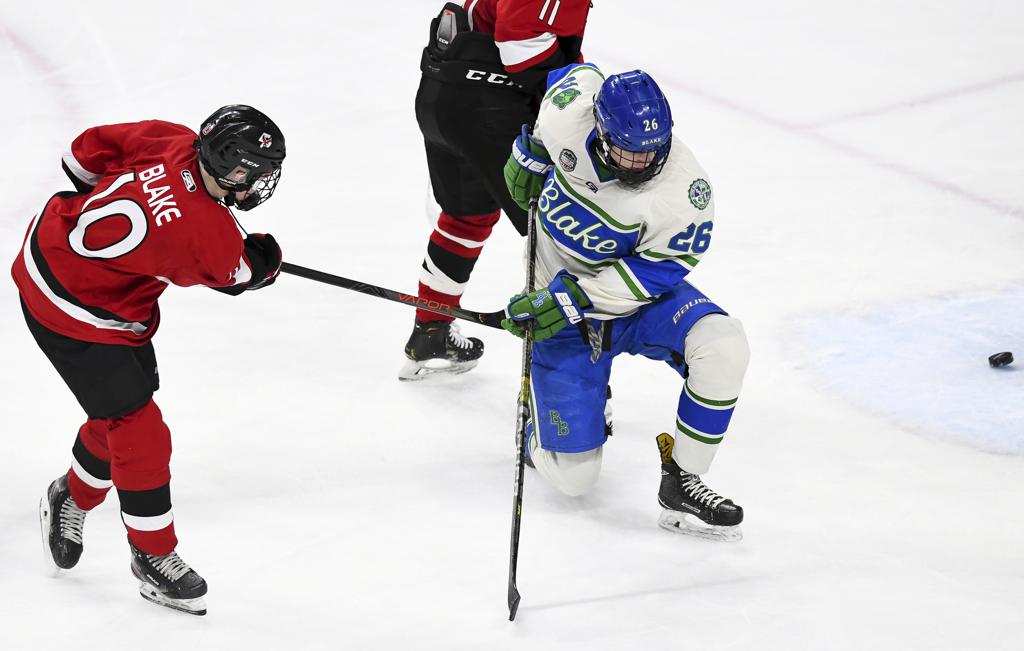 Jackson Blake saw his teammates chasing toward him in jubilation and figured something good must have happened. Sure enough, he had just scored a goal.

“I didn’t even know it went in until five seconds after,” said Blake, whose third-period goal proved to be the winner in Eden Prairie’s 4-1 victory over Blake on Friday in a Class 2A semifinal at Xcel Energy Center.

A sophomore committed to North Dakota, Blake grabbed a loose puck at the blue line and then, as he often does, transformed into character from a video game. He juked a defender as he darted left, then got past two more as he zoomed to the right. He fired his shot through a defender’s legs and across the grain to the left of Bears goaltender Aksel Reid, who was heading in the wrong direction.

Blake has superior ice vision, often making passes to teammates without bothering to look in their direction. But even he had trouble tracking where his shot finally landed, given he had to thread it through two small openings. Thus the delayed celebration.

“It just got through somehow,” he said.

Blake’s season hasn’t always been so charmed. The son of longtime NHL forward Jason Blake and a youth hockey superstar growing up in Eden Prairie, Jackson played part of his freshman season at Shattuck-St. Mary’s in Faribault. He moved back to Eden Prairie in January 2019 and resumed playing Bantam hockey in the Eden Prairie youth system. The Minnesota State High School League ruled the move made Blake ineligible to play in varsity games until late January.

Blake practiced with the Eagles' varsity but played most of the season with their junior varsity, where he left opponents overmatched. Blake made one of the most anticipated varsity debuts in high school hockey history on Jan. 30 against Buffalo, notching a first-period goal on his first shot.

“The wait was just another obstacle in our path,” said Eden Prairie senior Ben Steeves, a Mr. Hockey finalist committed to play at Minnesota Duluth.

Steeves and Blake are joined by senior John Mittelstadt, committed to the Gophers, on Eden Prairie’s top line. All three scored a goal against the Bears on Friday.

Forward lines with three players committed to top Division I programs are a rarity. Grand Rapids featured the trio of Micah Miller (St. Cloud State), Blake McLaughlin (Minnesota) and Gavin Hain (North Dakota) en route to the 2017 Class 2A championship. The trio accounted for all six goals in the 6-3 victory over Moorhead in the title game.

Brothers Nick, Jack and Ryan Poehling, all committed to St. Cloud State, fueled Lakeville North to the 2015 Class 2A title. Each of the Poehlings scored a goal in the Panthers’ 4-1 championship game victory over Duluth East.

Eden Prairie’s top trio will have the opportunity to duplicate that sort of magic Saturday.

“It was unbelievable getting him back because immediately we knew how solid we were as a line and what he brings,” Steeves said. “His shiftiness and his IQ, everything about him just helps our line get to the next level.”