Plus the beasts of the east, third-place and consolation games, Herb Brooks Award winners, hockey scribes' favorite tourney moments, attendance and a quote of the day. 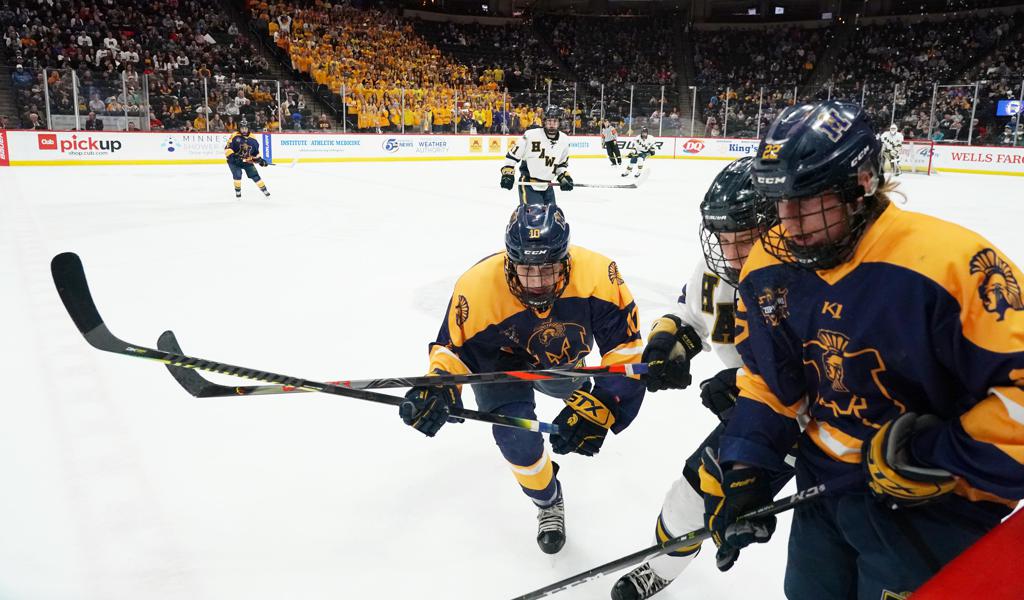 No, the massive Xcel Energy Center scoreboard wasn’t malfunctioning Saturday. It just appeared that way when the number 7 was stuck under the display of Mahtomedi’s shots for the better part of two periods.

“There was a lot of bending and not breaking,” Poeschl said after the Zephyrs won the Class 1A championship game 3-2 in overtime. They set a tournament record for fewest shots on goal in the title game by the winning team.

After losing to Hermantown 9-2 in the regular season, Mahtomedi plotted a strategy for Saturday’s championship game that turned the neutral zone into quicksand and the slot area into a no-entry zone.

“We’re not going to be able to go toe to toe with them,” Poeschl said.

Mahtomedi was outshot 42-12. The previous low for a title-winning team in a championship game came in 1977 when Rochester John Marshall stunned Edina East 4-2. The Rockets had 14 shots on goal.

The beasts of the east

“There’s certainly an awful lot of pride in the east metro,” Poeschl said. “For as much as we hear about the west metro … we’re often in the shadow of Edina, Wayzata, Benilde-St. Margaret’s, Eden Prairie and the list goes on. But I’m awfully proud of the east metro and the way that we’ve represented our conference.”

Blake senior defenseman Will Svenddal was named the winner of the Class 2A Herb Brooks Award. Svenddal grabbed the tourney spotlight Thursday when he scored six points in the Bears’ quarterfinal victory over Maple Grove. Colin Hagstrom of Mahtomedi received the award for Class 1A.

• Jack Sabre and Joe Miller each scored twice as No. 2 seed Blake beat unseeded St. Thomas Academy 4-0 in the Class 2A third-place game.

• Nate Bauer and Luke Kron each had a goal and an assist as top-seeded Andover beat unseeded Maple Grove 4-1 in the Class 2A consolation championship game.

• No. 2 seed St. Cloud Cathedral scored four goals in the third period as it rallied to defeat No. 1 seed Warroad 6-4 in the Class 1A third-place game.

• Jesse Peterson scored in overtime to power Delano past Monticello 2-1 in the Class 1A consolation championship game.

Attendance: An announced crowd of 8,978 fans saw the Class 1A championship game. The Class 2A title game drew 17,634.

QUOTE
“It was a clinic on how to play goalie because he makes everything look easy.”
— Patrick Andrews, Hermantown coach, on a 40-save performance for Mahtomedi’s Ben Dardis