The respected Hill-Murray captain added to the family hockey legend. 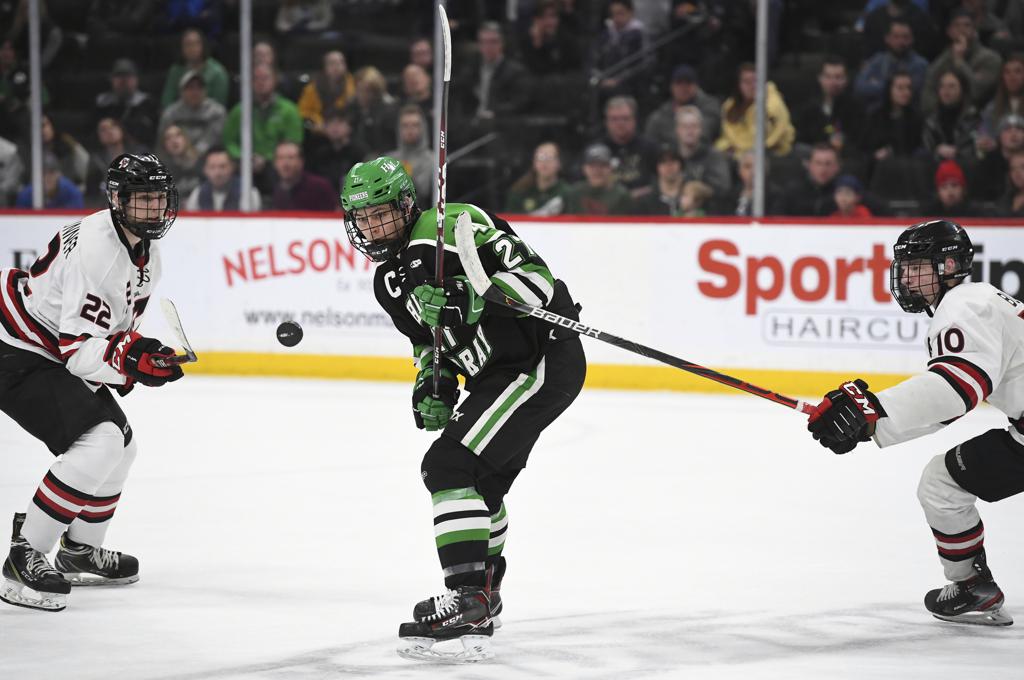 Hill-Murray forward Charlie Strobel (27) knocked the puck back to the ice as he was challenged by Eden Prairie defenseman Mason Langenbrunner (22) and forward Jackson Blake (10). Photo: Aaron Lavinsky * aaron.lavinsky@startribune.com

The goals were gorgeous. And incredibly clutch. The celebrations were wildly epic, too.

“Charlie was huge this summer on building camaraderie, taking the young guys out with the old guys,” Hill-Murray coach Bill Lechner said. “That’s not a guarantee for success, but you could see it coming.”

Strobel scored late in the second period to put the Pioneers ahead by three, then added a third-period insurance goal in their 4-1 victory over Eden Prairie for the Class 2A state title.

“I’ve been thinking about this moment from the day I first watched the state tournament,” Strobel said. “I always got butterflies watching it because I wanted to be a state champion so bad.”

Strobel oozes all the traits coaches crave from their leaders. Selflessness, toughness, relentlessness. He is the first at practice and last to leave. Never coasts through a drill. Says all the right things in the locker room and in postgame media sessions, when the answers are all about team, team, team.

Lechner, in his 23rd season leading the Pioneers, has had an abundance of great captains. A common trait binds them all, he said:

“He’s got to be respected,” Lechner said. “I use the analogy, in our coaching staff, as the leader of this group, if I’m sitting there with a cigarette, out of shape, with a beer in hand and going, ‘You guys have got to behave and work hard.’ Yeah, credibility is gone.

“So Charlie is that voice. But he lives it.”

The Pioneers were leading 2-0 with less than two minutes left in the second period Saturday when Strobel wheeled down the left boards behind the Eden Prairie net and stuffed the puck inside the right post. As pandemonium ensued, Strobel pulled his jersey from his chest, showing off the Hill-Murray crest to the crowd, before leaping into a mosh pit of teammates at the bench.

Strobel scored again late in the third to put the Pioneers ahead 4-1 and all but secure the victory.

The goals, Strobel’s 26th and 27th of the season, add another volume to the Strobel family legend. Twin brothers Mike — Charlie’s dad — and Mark Strobel were the twin engines who powered Hill-Murray to the 1991 state championship.

“It’s a great feeling to know that [Mike] won it in 1991 here as an assistant captain at Hill-Murray,” Charlie Strobel said. “I came in here and tried to do my best to do the same thing.”