The champions have been crowned and now it's time to see which players had standout performances that received individual recognition. 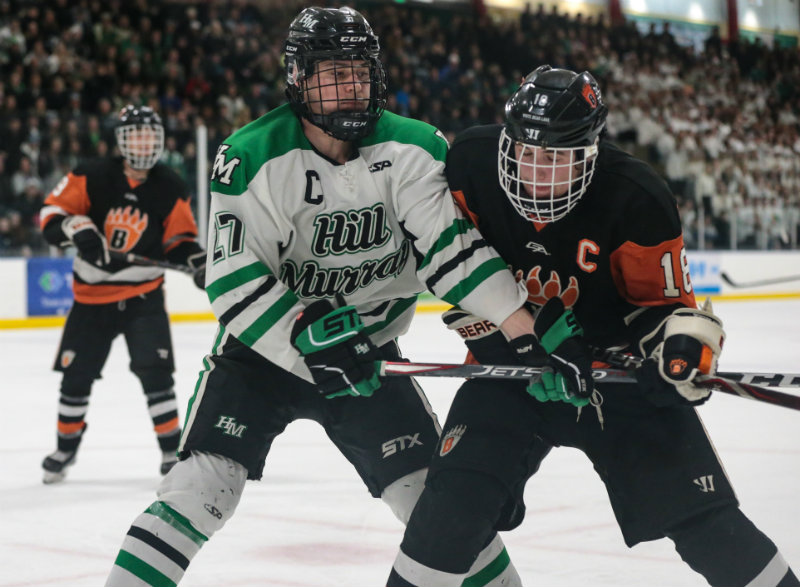 Hill-Murray's Charlie Strobel (left) was one of four Pioneers chosen to this year's Class 2A all-tourney team. Photo by Cheryl A. Myers, SportsEngine

Minnesota’s 76th boys’ hockey state tournament concluded on Saturday at the Xcel Energy Center in St. Paul and 24 players — 12 from each class — were recognized for their standout performances with all-tourney selections.

Those honored in Class 2A include Hill-Murray’s Charlie Strobel, Nick Pierre, Dylan Godbout and Remington Keopple.

The No. 5 seed Pioneers defeated No. 3 seed Eden Prairie 4-1 in the Class 2A championship game on Saturday after Strobel played the hero, netting an overtime goal to push Hill-Murray past St. Thomas Academy in a 3-2 semifinal triumph Friday. Strobel finished the tournament with four goals and two assists, including two goals and an assist against the Eagles.

Pierre had a team-high five assists and added two goals last week for Hill-Murray, while Godbout, a Wisconsin recruit, finished with two goals and two assists, including a pair of first-period goals against St. Thomas Academy. Keopple, a Star Tribune All-Metro first team selection, had a superb week, producing a 1.27 goals-against average and .942 save % in three starts. He had 21 saves against Eden Prairie.

Goalie Axel Rosenlund was honored with fellow Eagles Ben Steeves, Luke Mitteldstad and Mason Langenbrunner. Rosenlund put up a shutout to go with a .945 save % and 1.72 GAA. Steeves, a Star Tribune All-Metro second team honoree who is committed to Minnesota Duluth, had a team-best four goals and six points last week.

Top-seeded Andover, which was upset in a 3-2 quarterfinal loss to St. Thomas Academy, received just one all-tourney selection in defenseman Wyatt Kaiser. Despite upsetting the Huskies and forcing overtime against the eventual state champion Pioneers, no Cadets received all-tournament honors.

Mahtomdi defeated No. 1 seed Warroad in a 5-1 stunner on Friday before knocking off Hermantown in a 3-2 overtime performance the following day. Dulak had two assists in the championship game while Metz had a goal and two assists Saturday, including the primary helper on the overtime winner.

Hermantown’s all-tournament selections include Blake Biondi, a Minnesota Duluth commit and this year’s Mr. Hockey award winner. Biondi was kept off the scoresheet in the state championship game but he managed to tally four goals and three assists in the tournament. Biondi is joined by teammates Zach Kilen, Joey Pierce and Jacob Backstrom.

The all-tourney teams, presented by Wells Fargo and the Minnesota State High School League, were chosen by a panel of coaches who attended the tournament.

View the tables below to see complete lists of who made the teams.