The Class of 2020 fills out the state's career record books

Eight seniors and two juniors skated their way up the all-time leader charts in Minnesota for career points, goals and assists this past season.

Another season of hockey is in the books and 10 skaters — eight seniors and two juniors — find themselves in elite company, joining the ranks of the state’s all-time career leaders in points, goals and assists.

All forwards, with four coming from programs based in the Twin Cities metro area, the group boasts a bevy of elite talent. Some of whom will skate for Division I collegiate teams next season and perhaps beyond, as several statistically passed players who have had professional careers, including in the National Hockey League.

All but one of the players is a new addition to the list, as Jensen was in the top 100 a year ago after surpassing the 100-career-goals mark as a junior.

Click here to see a complete list of who tops the charts in career points, goals and assists in Minnesota history. Continue reading below to learn more about this year's additions to the career lists. 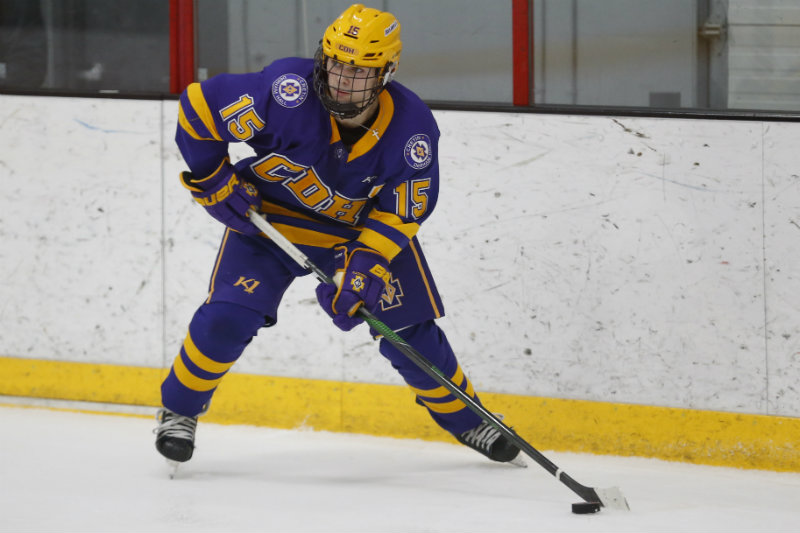 A Mr. Hockey finalist and the Star Tribune Metro Player of the Year, Gleason played four years of varsity and finished his prep career as Cretin-Derham Hall's all-time leading scorer. As a senior, he produced 2.89 points per game while recording 36 goals and 42 assists. He also had six hat tricks this past season, including a four-goal outburst in a 6-1 triumph over Centennial back in late December. In his second season as team captain, he guided the Raiders to a 20-6-1 overall record and a first-place finish in the Suburban East Conference standings. 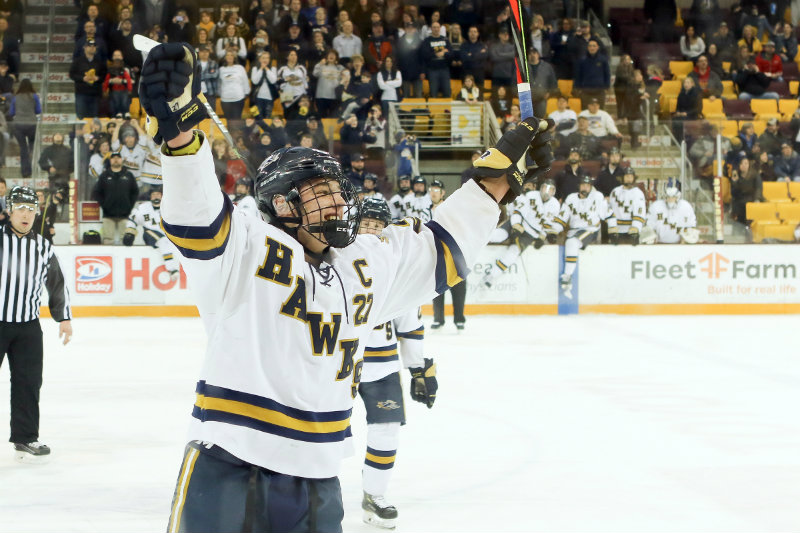 This year's Mr. Hockey award recipient led Hermantown all the way to a runner-up finish in the Class 1A state tournament to conclude his prep career. Averaging 3.06 points per game as a senior, Biondi racked up 47 goals and 48 assists as the Hawks' team captain. Providing offense when it mattered most, Biondi tallied 12 points in the section playoffs and another seven points in the state tournament. His 216 total career points tie him with Kyle Rau, a 2011 graduate of Eden Prairie who now plays on a two-way contract in the Minnesota Wild organization.

Cracking this list as a junior, Jensen didn't take his foot off the gas pedal for his senior year. He raced to 32 goals and 23 assists with a 2.20 points per game average, with his best performance of the season coming on Jan. 23 when he tallied six goals and two assists in an 8-5 victory over Park Rapids. Jensen, who powered the Blades varsity since being an eighth-grader, finished with 27 goals as a junior, 31 as a sophomore, 32 as a freshman and he recorded 11 in his first season. 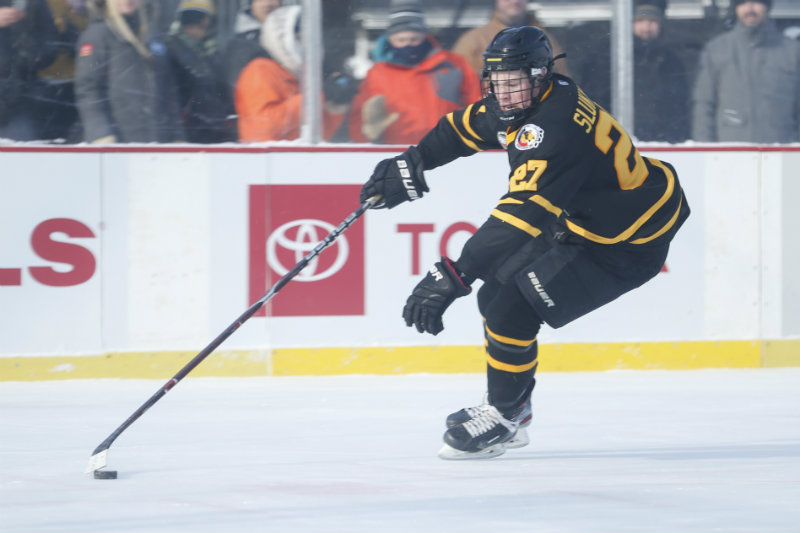 Grant Slukynsky moves the puck during a Hockey Day Minnesota matchup on Jan. 18. The forward from Warroad had 112 career assists. Photo by Jeff Lawler, SportsEngine

With 39 goals and 62 assists, Slukynsky was a scoring machine his final prep season. He was particularly effective in the postseason, recording four goals and 10 assists in the section playoffs helping the Warriors advance to their first Class 1A state tournament since 2010. A Mr. Hockey finalist, Slukynsky followed that with five goals and seven assists in the state tourney where Warroad lost 6-4 to St. Cloud Cathedral in the third-place game. He averaged 3.26 points per game in 2019-20 and 2.34 for all three years he played varsity.

Warner's on-ice success was key to the Crusaders making the last two Class 1A state tournaments. A state champion in 2019, and fresh off a third-place finish this season, Warner's final campaign in a St. Cloud Cathedral sweater resulted in him recording 33 goals and 43 assists with a 2.71 points per game average. For career assists, Warner finished three helpers ahead of Casey Mittelstadt, Minnesota's Mr. Hockey from 2017 who was a first-round pick of the Buffalo Sabres in the NHL draft from that same year.

With a 3.07 points per game average this past season, Perbix dazzled with 30 goals and 62 assists. Fifteen of his helpers came in the postseason. A Mr. Hockey finalist, Perbix hit the five-or-more-point threshold in six games during the season. With 142 assists, Perbix finished his career two spots ahead of T.J. Oshie, a Warroad product, NHL All-Star and Stanley Cup champion who plays for the Washington Capitals. Not too shabby for a forward who played just three seasons of varsity hockey. 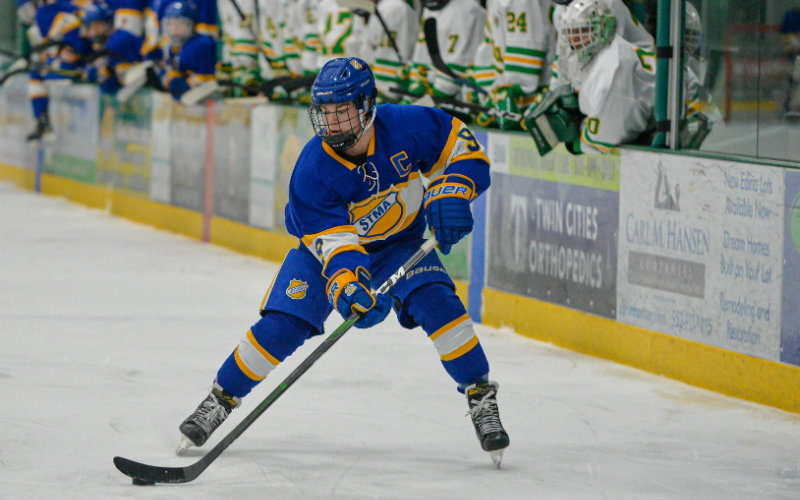 The first of two St. Michael-Albertville players to crack the list this year, Laylin was the Knights' No. 2 scorer behind Adam Flammang this past season. Laylin netted 26 goals and 29 assists — good for a 2.14 points per game average. He had three hat tricks, including three goals and an assist in a 5-5 tie with Edina in early January. His 55 points in 2019-20 match his production as a junior, when he had 25 goals and 30 assists.

Flammang was the Knights' top scorer, recording 32 goals and 24 assists his senior year. The Star Tribune All-Metro first team honoree had hat tricks against Hill-Murray, Wayzata and had a four goals and two assists in a 7-3 defeat of Rogers in late January. With a 2.24 points per game average, Flammang's 56 points this past season edges his 54-point junior campaign. 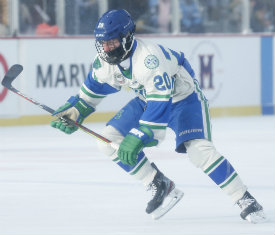 Miller, a Star Tribune All-Metro first team selection, is coming off his junior season tied with St. Michael-Albertville's Luc Laylin in the career assists category. Miller had an outstanding year, producing 80 points — a 25-point improvement from his sophomore season. With 33 goals, 47 assists and a 2.58 points per game average this past season, he helped the Bears to a Class 2A state tournament berth and he projects to rocket up the career assists list by the time he graduates. 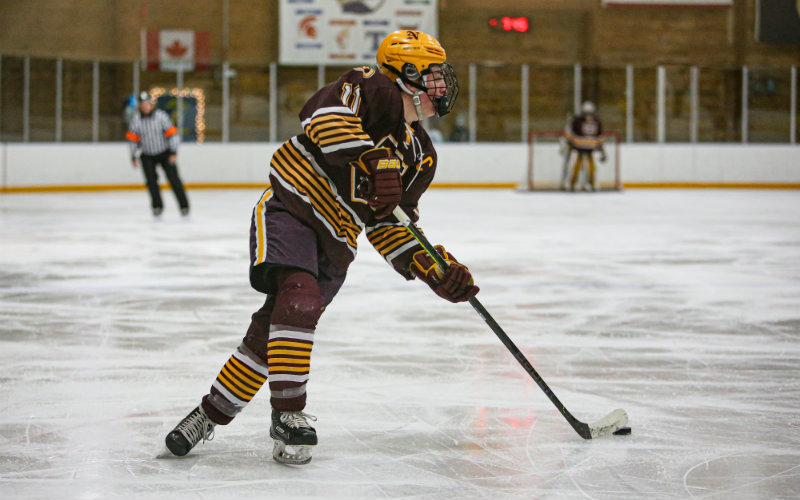 The second junior to make this year's list, VanZuilen looks to be a force in the Big 9 Conference for yet another year where he'll have the chance to climb the career charts. He had 39 assists and 16 goals in his penultimate prep season with a 2.21 points per game average. He recorded 55 points his sophomore year and 48 points as a freshman, supercharging him to 100 career assists with a lot of hockey left to be played.