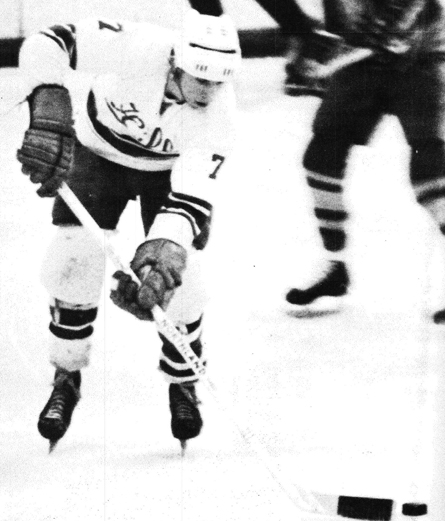 Bob Young was a four-year standout at Hill High School and scored the winning goal in overtime for the Pioneers in their 1970 state independent schools tournament victory over Duluth Cathedral. Courtesy photo

A pint-sized Bob Young would enter Aldrich Arena through the employees’ entrance, grab a shovel and go to work.

Young was 9, maybe 10, and already he had his first job. If you could call it that.

In exchange for his free admittance and prime viewing spot to some of the state’s most important and thrilling high school hockey games, Young shoved the goals out of the Zamboni’s way and cleaned up after the machine when it exited the ice surface.

“I felt like I was on top of the world getting into the arena like that,” Young said. “I was right on top of the action, watching through the glass by the Zamboni room.

“I would get some catcalls from the high school kids when I was on the ice. But I was too young to care about what they were saying.”

A standout athlete who also excelled in baseball and football, Young began to focus more and more on hockey as he entered high school. The huge crowds and rafter-shaking excitement levels at Aldrich were major influences.

“The interest in high school hockey at that time was really starting to explode,” Young said. “I wanted to be a part of that.”

"He was as good as a freshman as he was as a senior," said Les Larson, who graduated from Hill with Young. "And he was damn good as a senior."

As a sophomore, Young was moved back to defense by coach Andre Beaulieu. A former standout junior player in Quebec who had gone on to college stardom at Saint Mary’s University, Beaulieu was in the midst of building Hill’s program into a state powerhouse. 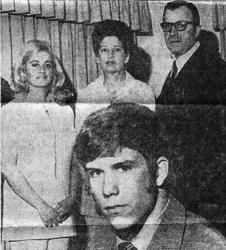 Bob Young, front, is pictured with his family after being named St. Paul's 1970 Athlete of the Year by the Downtown Lions' Club. Courtesy photo

Bob Paradise, a rugged defenseman who had played at Cretin High School and Saint Mary’s and was headed for a long NHL career, served as an assistant for Beaulieu for a season. Young remembers both Beaulieu and Paradise joining in on drills and scrimmages.

“Facing Andre and facing Bob Paradise, if you don’t get better you were going to get killed,” Young said.

Young was also pushed by fellow defensemen Larson, Dave Langevin and Dick Spannbauer. The foursome of future Division I college stars formed one of the greatest corps of defensemen in state high school history. Young, Langevin and Spannbauer all were NHL draft picks while in college.

Young and Larson were juniors and Langevin and Spannbauer sophomores in 1970 when the Pioneers squared off against Duluth Cathedral in the finals of the state independent schools tournament at Aldrich Arena.

Cathedral had won three straight state tournaments and featured scoring sensation Mike Randolph at center on a high-scoring top line. Cathedral had defeated Hill 6-1 in Duluth the previous year in the championship game of what was then called the Catholic schools state tournament.

Both Cathedral and Hill had defeated many of the state’s top public schools that season. The highly anticipated rematch was held in Maplewood at Aldrich Arena. The building was packed, the attendance soaring past 3,000 and the listed capacity. With the score tied at 4, the game pushed on into overtime.

Young, stationed at the point, fired a 45-foot shot that had little chance of getting through the traffic jam of in front of the goal.

“I didn’t get off that hard of a shot, to be honest with you,” Young said. “It just got through everybody and went into the left side of the net.

“The whole place just erupted,” Young said. “It was like nothing you would ever think would happen to you or your team.”

Also a standout linebacker on Hill’s football team and star pitcher and shortstop in baseball, Young was named the Downtown Athletic Club’s St. Paul Athlete of the Year (beating out baseball star Dave Winfield, among others) in large part for his role in the Pioneers winning their first state hockey championship.

“He was a very good athlete,” Beaulieu said, noting that Young’s father, Bob Young Sr., also had been a standout high school athlete at St. Paul Washington. “The family had good genes. As you could see it was just in him. He had the instincts, he had everything in him. He was fun to watch.”

Hill appeared headed to another state title during Young’s senior season. The Pioneers were undefeated, No. 1-ranked and the overwhelming favorite heading into the state independent schools tournament. Hill reached the title game, but Young had suffered a shoulder injury earlier in the tournament and wasn’t close to 100 percent.

“Oh yeah, he could hardly play,” Beaulieu said. “He tried, but he was in so much pain he couldn’t help a lot. That hurt us, because he played in all situations and he had played mostly the whole game for us all season.”

Blake upended the Pioneers 4-2 for the 1971 independent schools title.

Young, who had his pick of colleges, chose Denver over the University of Minnesota. After four seasons at Denver, the 1973 Buffalo Sabres draft selection (108th overall) embarked on a short professional career that took him to Johnstown, Pa.

Young played with Virginia’s Carlson brothers and  took part in the filming of the movie “Slapshot.” Young said, as an extra in a fight scene, his stick accidently clipped the eye of actor Paul Newman, who was playing the lead role. Newman was bleeding after suffering a minor cut.

“The director wasn’t too happy with me about that,” Young said.

Young is retired and lives in Scottsdale, Ariz., with his wife, Jane, and son, Sam, 17.