The most killer of B's 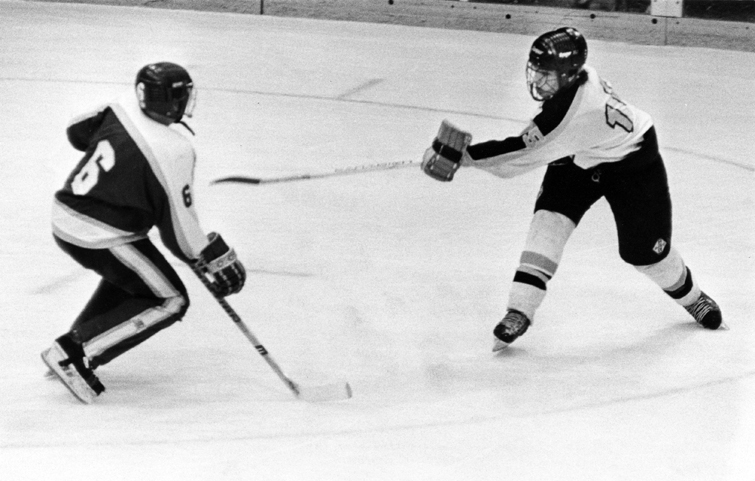 Scott Bloom, right, scored the winning goal for Burnsville with 27 seconds remaining in its 4-3 triumph over Hill-Murray in the 1985 state championship game. Star Tribune file photo 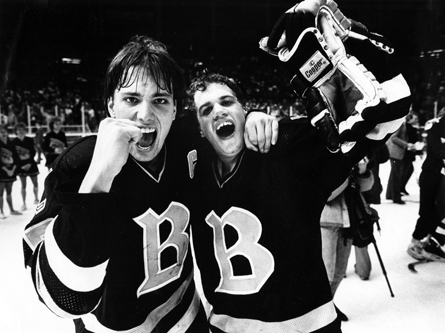 Populations had started their decline in northern Minnesota in the 1980s when a new high school hockey juggernaut emerged from the Twin Cities’ southern sprawl.

The nickname for the school’s athletic programs back then was the Braves, and their black and gold color scheme was heavy on the black.

Burnsville’s players were big, strong, fast and physical. Talk about intimidating. This was a team that, despite its lack of pedigree, couldn't be dismissed.

The upstart Braves reached the 1983 state championship game in their first state tournament appearance, losing 4-3 to Hill-Murray. The next year, with youth hockey scoring sensation Scott Bloom in the varsity lineup as a sophomore, the Braves lost 4-2 to Bloomington Kennedy in the quarterfinals and finished in sixth place.

“That’s what you did growing up, you sat and watched the high school tournament,” Bloom said. “That was your only goal.

“My sophomore year, it was just kind of overwhelming. It was disappointing we got beat in the first game. It deflates you when lose that first one. We knew coming back we wanted to make sure we didn’t lose our first game.” 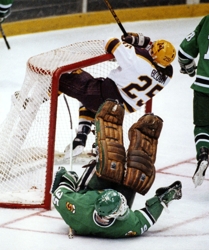 Burnsville's Scott Bloom of the University of Minnesota crashes into the net as North Dakota and goaltender Tony Couture of International Falls makes a glove save. Star Tribune file photo

Bloom’s scoring exploits at the youth level were legendary. He grew up in Eagan, which had a youth hockey association but no high school. Players coming out of middle school had to chose between playing for Rosemount or Burnsville.

“The Eagan kids, there weren't a lot of them that came over (to neighboring Burnsville),” said Bloom, who as a kid converted his family's unfinished basement into a stick-and-puck shooting gallery.

Routinely producing 100-goal seasons is a good way to gain acceptance. Bloom’s advanced hockey sense and wicked shot made him one of the most prolific youth hockey scorers the state has ever seen.

Goals didn’t come as easily at the high school level. Not at the 1984 state tournament, anyway. Bloom managed just one assist in the Braves’ three games.

Burnsville entered the 1985 state tournament with just one loss and expectations in the stratosphere. The Braves’ were loaded with so many upper-echelon players that their toughest competition often came during ultra-intense practice sessions.

“Everybody thought they were better than the next guy,” Bloom said. “And you wanted to prove that point.

“(Burnsville coach) Tom Osiecki was good about that. He would let guys compete.”

Bloom was held without a point in Burnsville’s 5-3 quarterfinal triumph over George Pelawa-led Bemidji in the 1985 state tourney. In a sign of things to come, Bloom scored the game-winner in the Braves’ 4-1 semifinal victory over Bloomington Jefferson.

"When you needed something to happen, he would step up," said Kelly Ramswick, Bloom's neighbor in Eagan and teammate at Burnsville. "Somehow, some way it would be Scott that would pull us through. In the big games, in the big moments he would rise to the occasion."

The 1985 state championship game belonged to Bloom, as he scored in the final minute of the first period to tie the score at 2, then scored one of the most dramatic goals in state tournament history in the closing seconds of the third.

With the score tied at 3, Bloom unleashed a shot that beat Pioneers goaltender Rick Horvath with 27 seconds remaining. The Braves won 4-3.

“He was somebody who liked to have the limelight, but not in a selfish way at all,” Mark Osiecki, a former Burnsville defenseman, said about Bloom. “He fed off the moment. All of a sudden it is the big stage, and he wasn’t going to shy away from it.”

Despite undergoing a massive roster overhaul, Burnsville reached the state tournament again in 1986. Bloom and Osiecki were among the few holdovers from the previous season’s senior-dominated championship team.

“There was less pressure because we weren’t expected to be very good,” Bloom said. “It took us half a year before we really got going.”

Burnsville entered the state tournament with a 17-5-1 record. Hill-Murray, with just two losses and most of its lineup back from the previous season, was heavily favored to win the championship.

Bloom had three goals and two assists as Burnsville beat South St. Paul 7-4 in the quarterfinals of the 1986 state tournament. He added two assists in the Braves’ 3-1 semifinal triumph over Duluth Denfeld.

Burnsville again squared off against Hill-Murray in the title game, and the Pioneers led 1-0 after the first period. Bloom scored what proved to be the winning goal in the second period and added another goal (and an assist) in the third in the 4-1 triumph.

“He was the goal scorer,” Tom Osiecki said. “He could shoot like nobody I ever had. He had a great sense of the game from the time he was a Squirt on.”

Bloom played four seasons at the University of Minnesota. After scoring a combined 18 goals in his first three seasons with the Gophers, he erupted for 24 goals in 43 games as a senior.

Bloom, who never played professional hockey, lives in Prior Lake with his wife, Jody, daughter, Ella, 3, and son, Jake, 2. He works for Re/Max Advantage Plus and sells corporate apparel for Broder Brothers. Bloom also coaches Prior Lake’s Bantam A team.