The Trojans alumnus made his first start for the Falcons as a sophomore last fall, proving to be a steady force in net while helping his team erase an 0-7 record to start to the season. 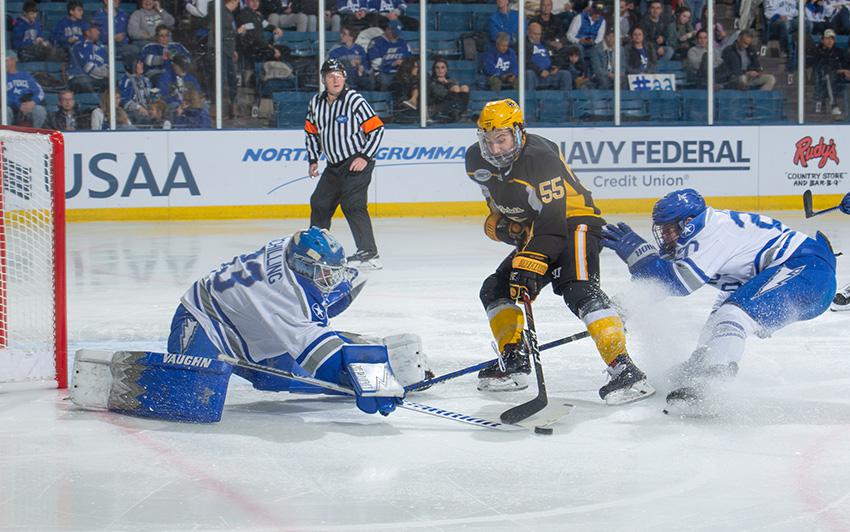 Former Wayzata goalie Alex Schilling (left) made his first start for Air Force in November 2019 against Sacred Heart. He won, helping the Falcons find stability after starting the season with an 0-7 record. All photos courtesy of Air Force Athletics

It was a no-brainer as far as Andy Berg was concerned.

The Stillwater native and Air Force Academy associate head coach had liked what he’d seen in Wayzata’s goaltender on a few scouting trips during the 2015-16 season, but the 2016 Minnesota State Class 2A state tournament cemented his decision to move Alex Schilling way up his recruiting list.

“We were recruiting a couple of other guys from his team, so I’d watched Alex a few times that season,” Berg said. “But he stood on his head in the state tournament. I can’t emphasize enough what an impression he made. He was just tremendous.”

Backstopped by Schilling, the Trojans captured their first state title that season, and the even-keeled goaltender played a huge part in that.

Fast forward four years, shifting from the Xcel Energy Center in St. Paul to Air Force Academy in Colorado Springs. Schilling was selected by his teammates as the Falcons’ MVP as a sophomore after rescuing a season that could have stayed grounded.

What’s remarkable about Schilling’s ascent is he accomplished it despite rarely having played prior to his first collegiate start. He logged minimal minutes during his freshman season with the Falcons and he made just two relief appearances totaling little more than two periods in the first seven games of the 2019-20 season.

Taking flight after getting an opportunity

Early last November, after relieving starter Zach LaRocque during a 7-1 shellacking at Sacred Heart, in Bridgeport, Connecticut, Schilling helped the Falcons defeat the Pioneers 4-3, giving the Falcons their first victory in eight starts.

Schilling never relinquished the net after that, starting Air Force’s next 29 games before the NCAA hockey season was called due to the COVID-19 pandemic.

“If I had known how he’d do, I’d have played him sooner,” said longtime Air Force coach Frank Serratore, a Coleraine native and former goaltender who played at Bemidji State. “I love when guys prove me wrong, and he did. I should have given him a chance sooner.” 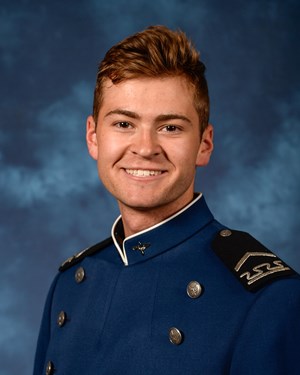 Schilling hit the tarmac running, helping Air Force win six of its next 10 games and getting points in three more contests. After the Sacred Heart victory on Nov. 2, he allowed more than two goals only twice in that stretch.

The Falcons ultimately went 12-11-6 in Schilling’s starts and were gaining momentum heading into the Atlantic Hockey Association (AHA) quarterfinals.

Schilling wrapped his year with a respectable .903 save percentage and a 2.39 goals-against average while logging 1,734 minutes in goal.

“The biggest shame was not being able to show what he and the rest of the group could do on a big stage,” Serratore said. “We had won five of our last six games and were playing our best hockey when the virus suddenly ended the college hockey season just prior to the conference playoff quarterfinals.

“I would have loved to see how he would have performed because he’s always been a winner, whether in Minnesota hockey or the North American League. He finds a way to get it done.”

Going back to his prep sports career at Wayzata, there was no doubt about Schilling being a winner.

He won a state title in tennis as a doubles player during his sophomore year, and then, of course, the big-school hockey crown as a senior.

“That was an extremely special time,” Schilling said. “I played at Wayzata Youth Hockey Association for 10-plus years. When you play with the same guys for all that time in Minnesota you really form a unique bond with your teammates.

“We went into that season with a good team. We had some [NCAA Division I] recruits (including Mark Senden, who went to North Dakota, and Union’s Colin Schmidt), but there is a lot of talent in Minnesota.

“Benilde-St. Margaret’s was No. 1 all season, and we had to beat them in our section to go to state. They were upset in the semifinals. It all came together for us — we had a lot of seniors and made a special run.”

Schilling was at his best when it mattered most — posting a .936 save percentage and a 1.67 GAA in the state title run.

“You could see his athleticism,” Berg said. “We liked his background, and he seemed like he understood the position. And he played really, really well under pressure. He seemed like a calm, cool guy.”

Off to the Centennial State

Schilling committed to Air Force midway through his second season playing for Austin in the North American Hockey League. He had a decent rookie campaign and then his career surged in his second year. He had a 22-13-0-2 record with a 2.35 GAA and a .916 save percentage en route to receiving Central Division Goalie of the Year honors. He followed that with a strong seven-game playoff run, posting 2.17 GAA and .914 save percentage.

“You could see his natural progression in junior hockey,” Berg said.

Schilling committed to the Falcons in December 2017.

“It took a while for me to commit,” Schilling said. “It wasn’t like I thought ‘I’m only going to a military academy.’ When I went to juniors the goal was playing Division I. I wanted to graduate from a place I could be proud of and I wanted a challenge. I wanted a great academic institution.

“When Air Force talked to me, and I learned more about the academy, it was a win-win for everything I wanted.”

A couple of things stood out to Schilling almost immediately upon his arrival in Colorado Springs.

First, he wasn’t going to play as a freshman. Billy Christopoulos was ensconced as Air Force's starting goaltender, LaRocque was a veteran backup, and the Falcons were coming off their second consecutive NCAA tournament.

Second, Schilling wasn’t yet physically ready for the demands of playing Division I hockey. 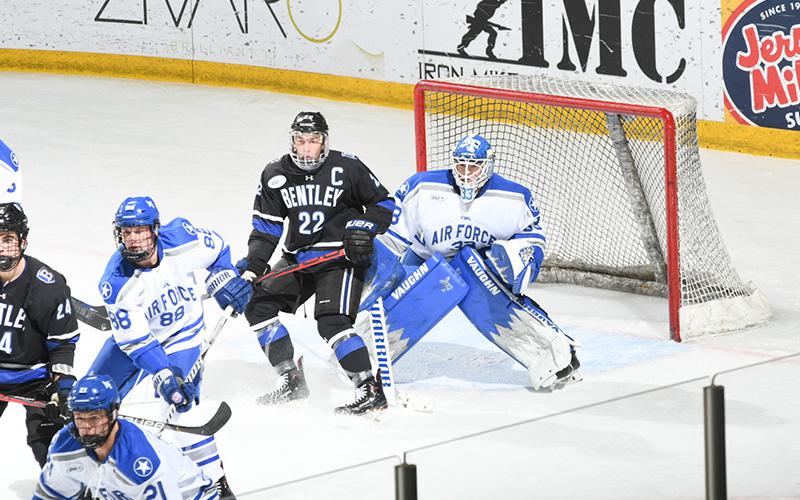 Goalie Alex Schilling (shown in net) hadn't made a start for Air Force prior to the 2019-20 season but was selected the team MVP following his sophomore-year campaign.

Add it all together and it amounted to a redshirt season for Schilling, not necessarily a bad thing at Air Force, given its military and academic demands.

“Those two components helped me going into my sophomore year,” Schilling said. “Billy was a senior, and he was the man on the team. I really looked up to him.

“I wanted to see myself in that position when I got the opportunity. He taught me how he adapted, how he succeeded at the college game. We sort of had the same playing style. That was a major key for me. I didn’t have to play right away; I could learn the system and learn from Billy. That was really helpful.”

The other part of the equation required plenty of sweat equity.

“Physically, he wasn’t very strong,” Berg said of Schilling. “But one advantage we have here is our facilities. We thought if we could get him a little stronger, a little quicker, it would maximize all of his abilities.”

This wasn’t breaking news to the 6-foot-1 Schilling.

“I had to get stronger, I realized that right away,” he said. “The coaches put me on a summer training program — a lot of heavy lifts — when the season was still going on. I’d stay after practice to lift, or I’d lift before games. I knew I was not going to get in the net.”

Schilling's body eventually caught up to his mind and he was ready when the call came for him to become a key contributor to help reverse Air Force's fortunes last fall.

“He’s that way as a person. He’s got a really good mental makeup — calm, cool and collected.”

That conjured up memories of his predecessor Christopoulos, and it made the transition to Schilling that much easier for the team, which helped facilitate the Falcons’ turnaround.

“It’s just like playing in front of Billy,” said Falcons co-captain Zach Mirageas. “Schills brings so much confidence to the team in the defensive zone.”

“Schills is a glue guy who brings everyone together,” Mirageas said. “He never really has a bad day and it translates to the ice. He’ll make remarks to the refs after a whistle, joking around."

Mirageas also said that if Schilling has bad days or rough practices his teammates don’t see it. Schilling is known for bringing the same attitude every day and for making everyone laugh.