Eden Prairie's Kyle Rau, a Top 100 pick, did his best work when pressure was most intense 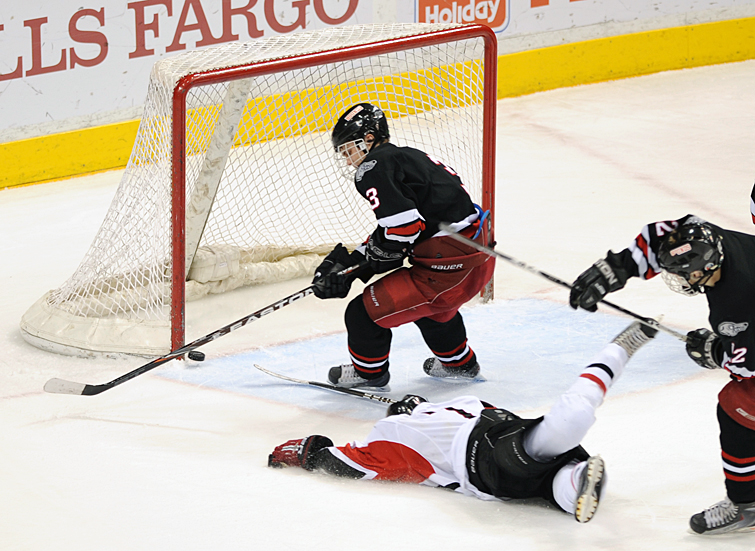 A diving Kyle Rau of Eden Prairie knocks the puck past Duluth East defenseman Andrew Kerr (3) and into the goal in triple overtime of the 2011 state Class 2A championship game. Photo by Helen Nelson 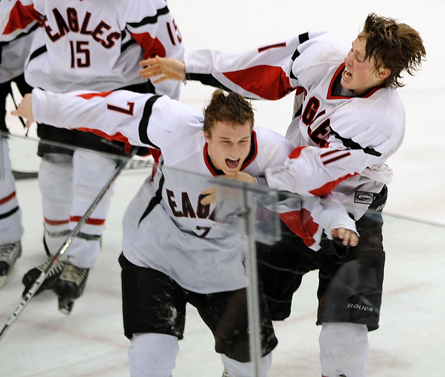 Kyle Rau, front, celebrates after scoring the winning goal in triple overtime against Duluth East in the 2011 state Class 2A championship game. Photo by Helen Nelson

He scored on a poor-angle shot from deep in the corner with five seconds left in overtime to beat Hermantown and called it “lucky.”

He scored on a rebound to end a wild scramble in front of the Wayzata goal in double overtime in the Section 6AA final and said he “didn’t even see the net.”

He scored while sliding on his stomach through the crease, poking the puck forward off the post, off a defenseman’s skate and into the goal in triple overtime in the state Class 2A championship game against Duluth East and said, well, he didn’t have a lot to say after that one.

Kyle Rau’s standard response most every time he scored a dramatic game-winning goal for Eden Prairie, and there were dozens of them starting when he was a Squirt, was that he was the recipient of a “lucky bounce.” Or, that if you shoot enough, “sometimes they go in.”

The only person buying Rau’s explanations is Rau.

“He is just humble,” said Curt Rau, Kyle’s twin brother. “Even if I talk to him and bring up a big goal, he will say, ‘Yeah, I know, I just got lucky.’

Rau scored 108 goals and added 108 assists in three varsity seasons for the Eagles. The only other player in state history to score as many points and win two or more titles is Eveleth’s John Mayasich. 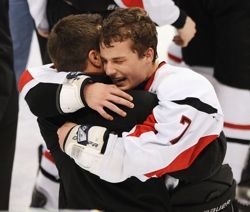 “Two state championship out of three years, and to put up that many points playing that schedule and in that conference is something special,” Minnetonka coach Brian Urick said.

It should be noted that not all of Rau’s goals were overtime winners scored in the most dramatic of fashion. It just seemed that way.

As a sophomore, Rau scored two goals in the third period as Eden Prairie rallied to beat Blaine 4-2 in the 2009 state Class 2A semifinals. The Eagles beat Moorhead 3-0 in the championship game, and Rau was one of three Eden Prairie players named to the 11-member all-tournament team.

Playing in the brutally tough Lake Conference, Rau scored 81 points as a junior. Eden Prairie was ousted that season by Minnetonka in the Section 6AA title game.

“We were fortune to get him his junior year with our four outstanding defensemen,” Urick said. “I think it also helped to play on the Target Center ice sheet where it was really crappy ice. I definitely think that helped us in slowing (Rau) down.”

“Not only did he play well against an incredible schedule, the endurance that he had to have being able to be able to make it through it was amazing,” Eden Prairie coach Lee Smith said.

All those “lucky” goals in overtime, double overtime and triple overtime were the byproduct of extra conditioning sessions initiated by Rau at the end of practice.

Curt Rau said the rest of the team would be headed to the locker room, and Kyle would still be on the ice, stopping and starting, skating down and back, down and back.

“He would do that just when he was fatigued, to get his quick feet going,” Curt said. “So he would have that extra push when it gets late in the game.”

Rau’s work habits rubbed off on the rest of the Eagles, who couldn’t in good conscience hit the showers when their star player was still grinding away out on the ice.

“We would usually sit there and just be messing around, and he would do the extra conditioning,” Curt said. “It was one of those things where everyone else started picking up on it, putting in the extra time, too.”

Kyle said his last game, the epic triple-overtime marathon against Duluth East, was his most exhausting.

As for the extra conditioning, “Just a little extra to keep getting better. Whatever it takes,” Rau said. 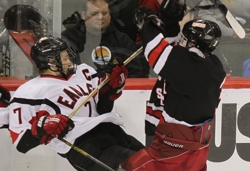 Rau grew up with a built-in role model in his older brother Chad, a star forward in high school for Eden Prairie and in the WCHA for Colorado College. Kyle also had an ever-ready one-on-one opponent in Curt, who had a two-inch, 15-pound advantage during their backyard battles.

“I think (Kyle’s) toughness comes from growing up with two older brothers and twin brother who was always bigger than him,” Curt said. “We had a rink in the back yard, and me and him would be out there countless hours. He is a 5-9, 165-pound kid playing like he is 6-2, 200.”

Bone-crunching collisions weren’t the centerpiece of Rau’s game, but he could give – and take – big hits as well as anyone.

“Pound for pound he is solid,” former Wayzata coach Carl Davis said. “He is tough to knock off the puck.

“He’ll stand up to hits. There was one game at Eden Prairie, he laid some hits on our guys that were unbelievable.”

Rau was named Mr. Hockey in March after the state tournament, when he joined the USHL franchise in Sioux Falls for its playoff push. He scored 10 points in the final 11 games of the regular season then led the Stampede with 12 points in 10 playoff games.

Selected in the third round (91st overall) by the Florida Panthers in the 2011 NHL Draft, Rau has eight goals and seven assists in 11 games this season for the University of Minnesota. 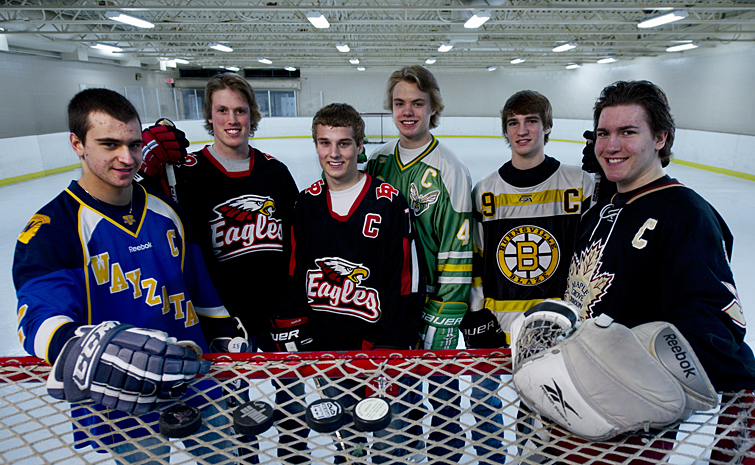