Normal or not, Minnesota high school hockey masked up, ready to play and in a ‘happy place’

An 18-game schedule and the hope of a state tournament greet players and coaches as games begin Thursday. 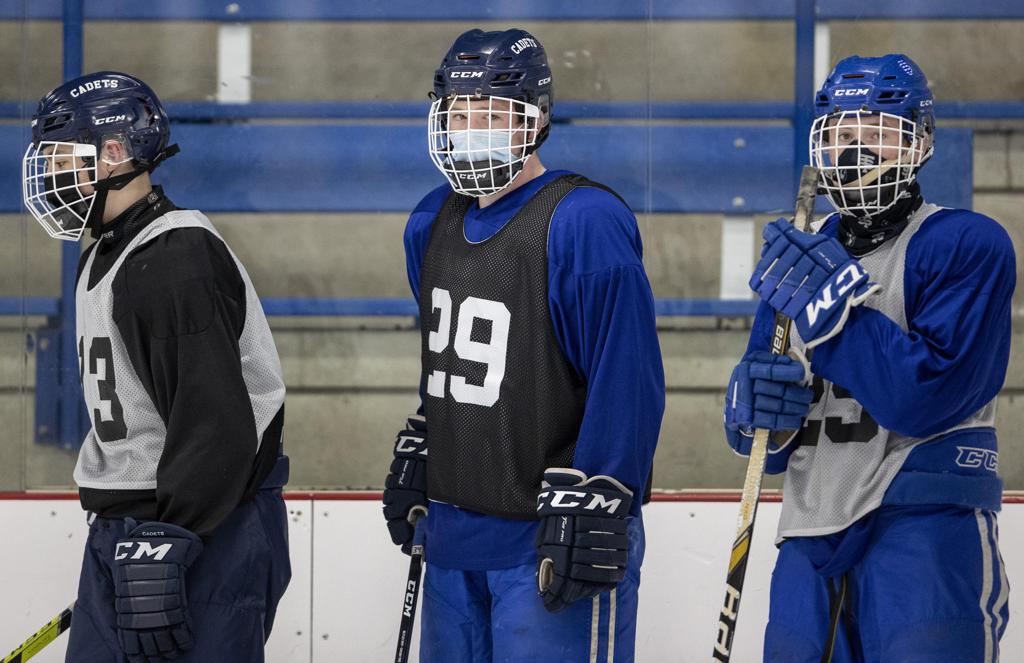 Lyle, a freshman at Army, scored his first collegiate goal on Sunday. In Lyle’s reply, Randolph said, he wrote, “If I could tell your boys anything, it would be to realize how precious it is to play. We’re taking it day to day and they should, too.”

Randolph planned to read the text message to players at practice Wednesday, on the eve of the Greyhounds’ first game in a season shortened by COVID-19.

Boys’ and girls’ hockey teams throughout Minnesota will play a maximum of 18 games, most of them against regional opponents. As the season gets underway, face coverings must be worn at all times.

“What you worry about is that once we’ve had some practices and a few games, kids will think we’re back to normal,” Randolph said. “I’ll be reminding them, ‘No, it ain’t normal. There won’t be a normal day all season.’ ”

Diligence, not pessimism, is behind Randolph’s words. Hockey coaches around the state are offering a similar message.

“This season is already something different,” said Minnetonka girls’ coach Tracy Cassano, in her 15th season. “We tell our kids to live in the moment, and right now, we’ve got the green light. But you have to be flexible. We might have a game tomorrow against Wayzata, for example, and then have it canceled and we have to play someone else.”

Benilde-St. Margaret’s coach Ken Pauly said, “It’s dangerous to make long-term plans. It’s a week-to-week deal. Maybe less than that. Our goal is to manage COVID-19 as much as the teams we are playing. That is part of the formula now.”

The prospect of playing 18 regular-season games instead of the usual 25 has Randolph, third all time in Minnesota with 652 career victories, adjusting his formula. In a normal year, his coaching staff analyzed the team in depth every five games. That will happen every three games this season — so long as the season goes that far.

“We tell them, ‘You’re not going to get COVID here in practice, you have to mind your P’s and Q’s off the ice so that we can all keep coming to the rink,’ ” Randolph said.

For all of its challenges, the already-delayed hockey season brings hope. The Minnesota State High School League is working toward state tournaments for winter sports, something fall teams did not experience.

“It’s a nice carrot in terms of having something to play for,” Pauly said. “And I think the NHL and the Stanley Cup bubble provided some motivation for the kids. Even though we won’t have the state tournament in the way we’ve always known, we know it can still be special.”

And with skates on their feet and eager players in their midst, coaches have reason to smile behind their masks.

“My activities director called me after the second day of practice and asked how it was going,” Cassano said. “I said, ‘I’m in my happy place.’ ”

Then the coronavirus changed everything. When Hockey Day Minnesota producers Fox Sports North and the Minnesota Wild next shared event information, they weren’t talking mid-January matchups and game times. Instead, they canceled the 15th running of the hockey happening, which makes outdoor high school games its centerpiece.

Mankato will host Hockey Day Minnesota 2022 at Blakeslee Stadium on the southern edge of Minnesota State University. The event moves to White Bear Lake in 2023.