Senior defenseman Jack Peart, the Thunderhawks' leading scorer a season ago, tallied the game-winning goal in the third period. 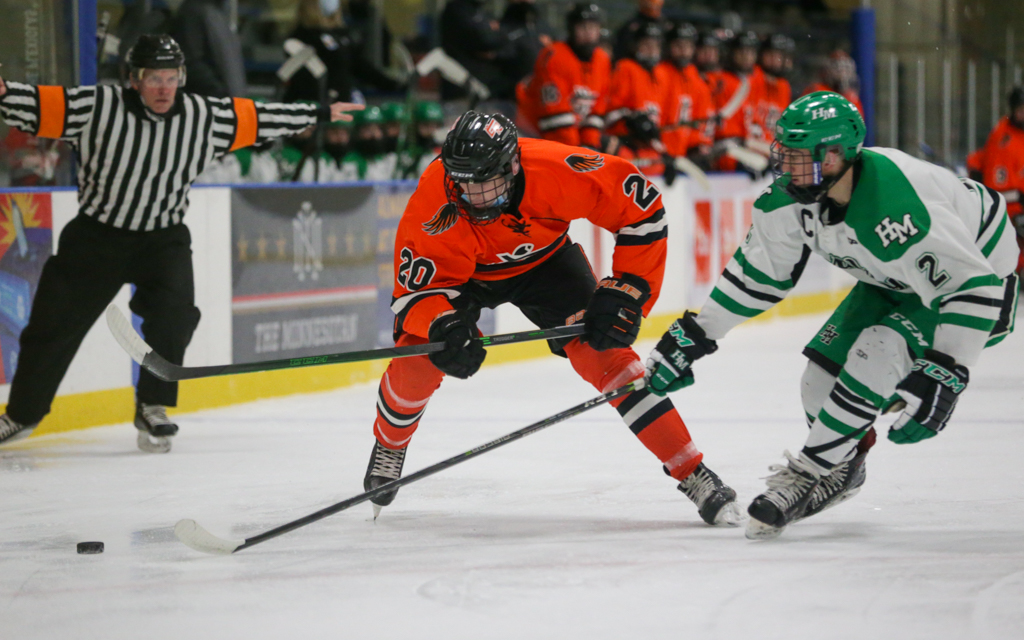 The battle on the ice between Grand Rapids and Hill-Murray was about as close as one might expect for two of the top teams in the state bordering each other in the state rankings.

“You’ll see what your D zone’s made of in games like these,” said Grand Rapids senior defenseman Jack Peart.

In a slight upset, Grand Rapids, ranked No. 7 in the Class 2A coaches’ poll, defeated No. 6-2A Hill-Murray 2-1 Saturday afternoon at Aldrich Arena. Sometimes it’s a lucky bounce here or there that’s the difference. It certainly was the case in this game; each of the three goals took a bounce or deflection off the opposition before the puck found the back of the net.

Shots on goal were 21-14 in favor of Hill-Murray, without a lot of second-chance opportunities in what Grand Rapids coach Wade Chiodo called an even, “neutral-zone game.”

“That’s what happens when you’ve got two good teams going back and forth,” Chiodo said. “Obviously we got a bounce at the end, it went in the net and we’ll take it.”

The Thunderhawks (4-0-0) broke a 1-1 stalemate with 6 minutes, 20 seconds to play in regulation when Peart’s shot from the point made it through traffic and into the net for the eventual game-winner. His shot hit a Hill-Murray defenseman on the way in, which Peart said he and his teammates will take any day.

It was the first goal of the season for Peart, a St. Cloud State commit who was the leading scorer for the Thunderhawks last year with 13 goals and 18 assists in 27 games. Peart, who has four assists to go with his goal this winter, controlled play well Saturday, doing his best with his teammates to keep the Pioneers from generating those second-chances opportunities.

Chiodo described Peart as “big-time” and the type of player that doesn’t come around often.

“He’s fun to watch, “Chiodo said. “He’s two steps ahead of the play. He makes us coaches look a lot better when he’s on the ice.”

To go along with solid defense, the Thunderhawks have a first-year starter in net, senior Wyatt Pilkenton. He improved to 4-0-0 with the victory, with 61 total saves on the season while allowing only two goals so far.

When the Pioneers took a 1-0 lead in the second period Saturday on senior Jared Jensen’s power-play goal — getting that bounce in front of the net following a Joe Palodichuk point shot — it ended Pilkenton’s shutout streak at 124 minutes, 38 seconds going back to late in the third period of his team’s season-opening 6-1 win at Cloquet-Esko-Carlton on Jan. 14.

In the first true test of the season for the Thunderhawks facing the defending Class 2A champs in Hill-Murray, Pilkenton showed up for his teammates, and they have a lot of confidence in him, Peart said. It was a game Pilkenton and his teammates all looked forward to, Pilkenton said.

“I think we were just moving the puck really well, and we were playing as a team and not individuals today,” Pilkenton said. “That’s what ended up getting the puck in the net for us.”

Though Hill-Murray scored first in the second period after a tightly played first period, the lead lasted only a few minutes. Hill-Murray (2-1-0) cashed in on its first power-play chance of the game, and about three minutes later, Grand Rapids did the same when junior defenseman Sam Sterle fired a blast from the point that deflected into the net for his first goal of the season.

Hill-Murray coach Bill Lechner also noted the even play between the two quality programs. It was nearly a year to the day they last faced each other, with Hill-Murray winning another close game, a 1-0 decision in Grand Rapids.

“Two really good teams played a good game of hockey,” Lechner said. “It’s one of those where you hope that no one loses.

“They had a couple chances. We had some good chances. They got the last bounce and won 2-1.” 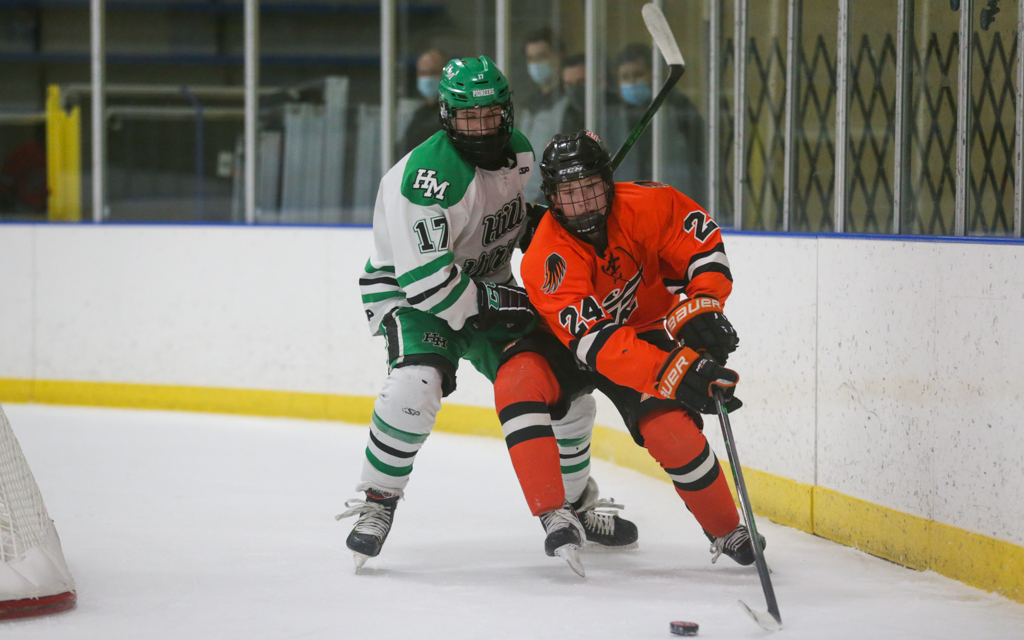 Grand Rapids' Sam Sterle (24) battles Hill-Murray's Dylan Godbout (17) for control of the puck during Saturday afternoon’s game. Sterle had a goal in the Thunderhawks’ 2-1 victory over the Pioneers. Photo by Jeff Lawler, SportsEngine

The battle on the ice was about as close as one might expect for two of the top teams in the state bordering each other in the state rankings.

In the slight upset, Grand Rapids, ranked No. 7 in Class 2A coaches’ poll, defeated No. 6-2A Hill-Murray 2-1 Saturday afternoon at Aldrich Arena.

The Thunderhawks (4-0-0) broke a 1-1 tie in the third period when senior defenseman Jack Peart’s shot from the point made it through traffic and into the net for the eventual game-winning goal with 6 minutes, 20 seconds to play in regulation. 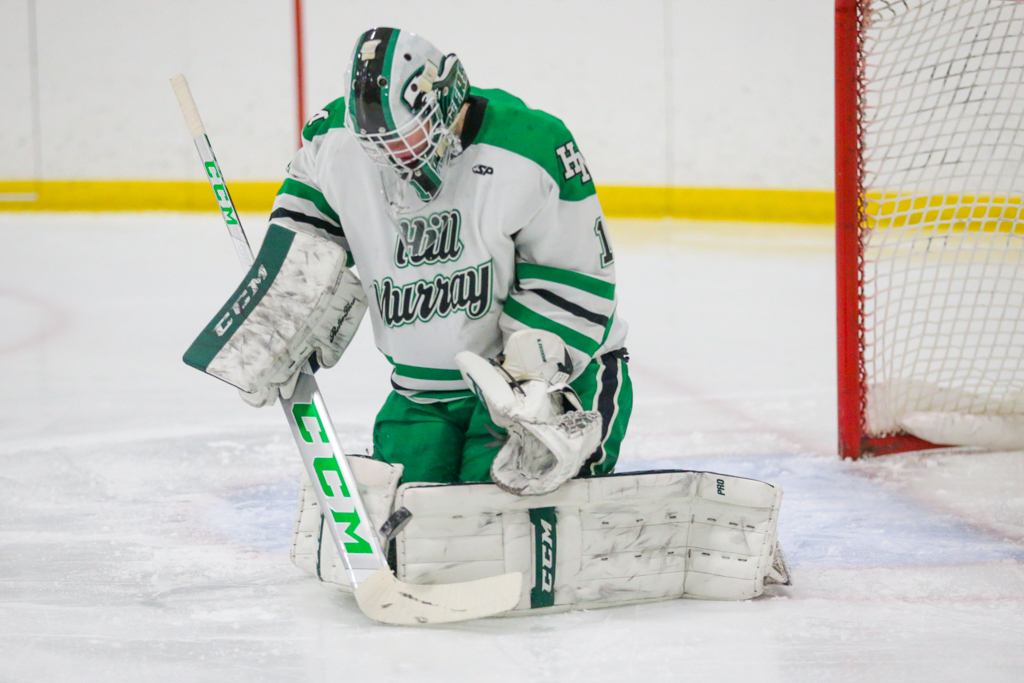 Hill-Murray's Nick Erickson (1) makes a save during the first period of Saturday afternoon’s game against Grand Rapids. The defending Class 2A state champion Pioneers fell to the Thunderhawks 2-1. Photo by Jeff Lawler, SportsEngine