The Rams come from a school with small enrollment but they boasted plenty of forward depth to beat St. Cloud Saturday. 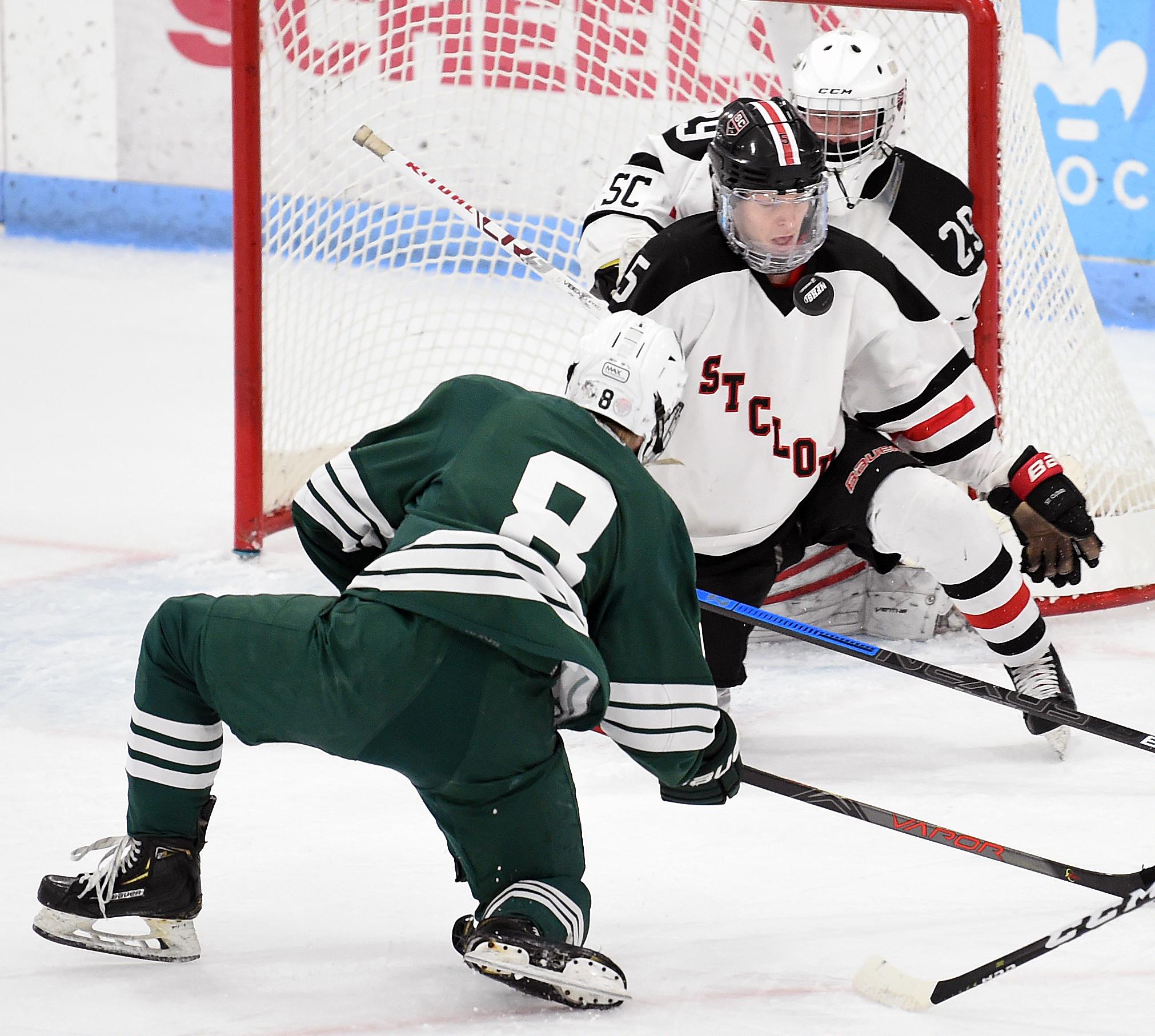 The numbers just don’t add up.

Roseau, with an enrollment of about 330 students, is the smallest school playing Class 2A hockey in the state. Sure, the Rams always have skilled players, but enough to form three lines so interchangeably good that any one of them could be labeled No. 1?

Roseau beating big-school teams because of its superior depth seems about as unlikely as palm trees sprouting on the Canadian border. Yet there were the Rams on Saturday against St. Cloud, trotting out forward line after forward line that produced scoring chances and goals at equal rates in a 5-1 triumph at the Municipal Athletic Center in St. Cloud.

“We have three players up front that played in the Elite League, and they are very good hockey players,” Roseau coach Andy Lundbohm said after the Rams, ranked No. 10 in the Class 2A coaches’ poll. “But they all seem to play better at center.”

Lundbohm was referring to the trio of senior Paul Huglen and juniors Gavin Gunderson and Max Strand. They were Roseau’s top three scorers last season, combining for 62 goals and 57 assists, mostly playing on the same line. They are among the Rams’ points leaders again this season, although the scoring has been much more evenly dispersed among the team’s top nine or so forwards.

“We’ve got lot of good players this year, and we work well together,” said Huglen, who scored twice against St. Cloud (2-1-0). “I wasn’t sure about playing center at the beginning of the season, but I really like it.”

Strand had two assists and Gunderson added one on Saturday, but the real story so far for Roseau (4-0-0) this season has been the scoring punch provided by forwards such as Noah Urness, Kellen Murphy and Tyler Bjerk, among others. Murphy had a goal and an assist against St. Cloud. Bjerk also scored and Urness added an assist.

A three-goal outburst in a span of 2 minutes, 19 seconds early in the second period boosted Roseau to a 4-0 lead. Bjerk, Monsrud and Huglen — all on different lines — were the scorers.

“I think it helps when you have three lines on the ice you can trust at any point,” Lundbohm said. “In the past we’ve kind of leaned on a top line. And it was tough sometimes, they ran out of gas in the third period.”

Lundbohm reserves the right to reunite Huglen, Gunderson and Strand any moment. But right now, why would he?

“We haven’t tried the three of us together this season,” Huglen said. “But if we’re winning like this, we don’t need to.” 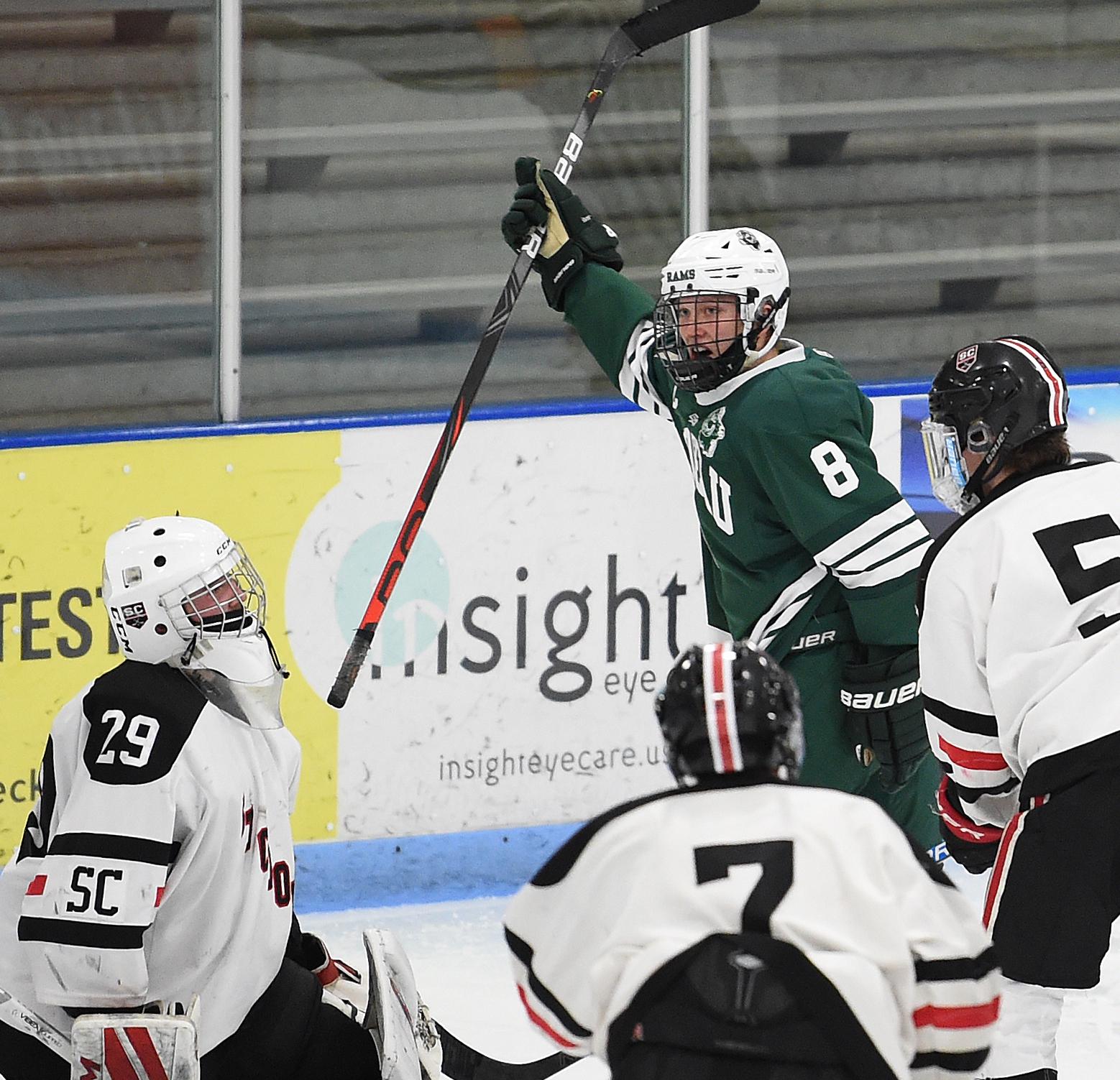 Roseau scored three goals in a span of 2 minutes, 19 seconds early in the second period on its way to an 5-1 victory over St. Cloud on Saturday afternoon in matchup at the St. Cloud Municipal Athletic Complex with Class 2A, Section 8 playoff seeding implications.

St. Cloud beat Roseau 4-2 in Roseau in the teams’ lone meeting last season. Both teams lost to Moorhead in the section playoffs; St. Cloud 8-2 in the semifinals and Roseau 3-2 in the championship.