Hunter Newhouse guided the Skippers' attack with two goals, including the game-winner, in a victory over the Greyhounds. 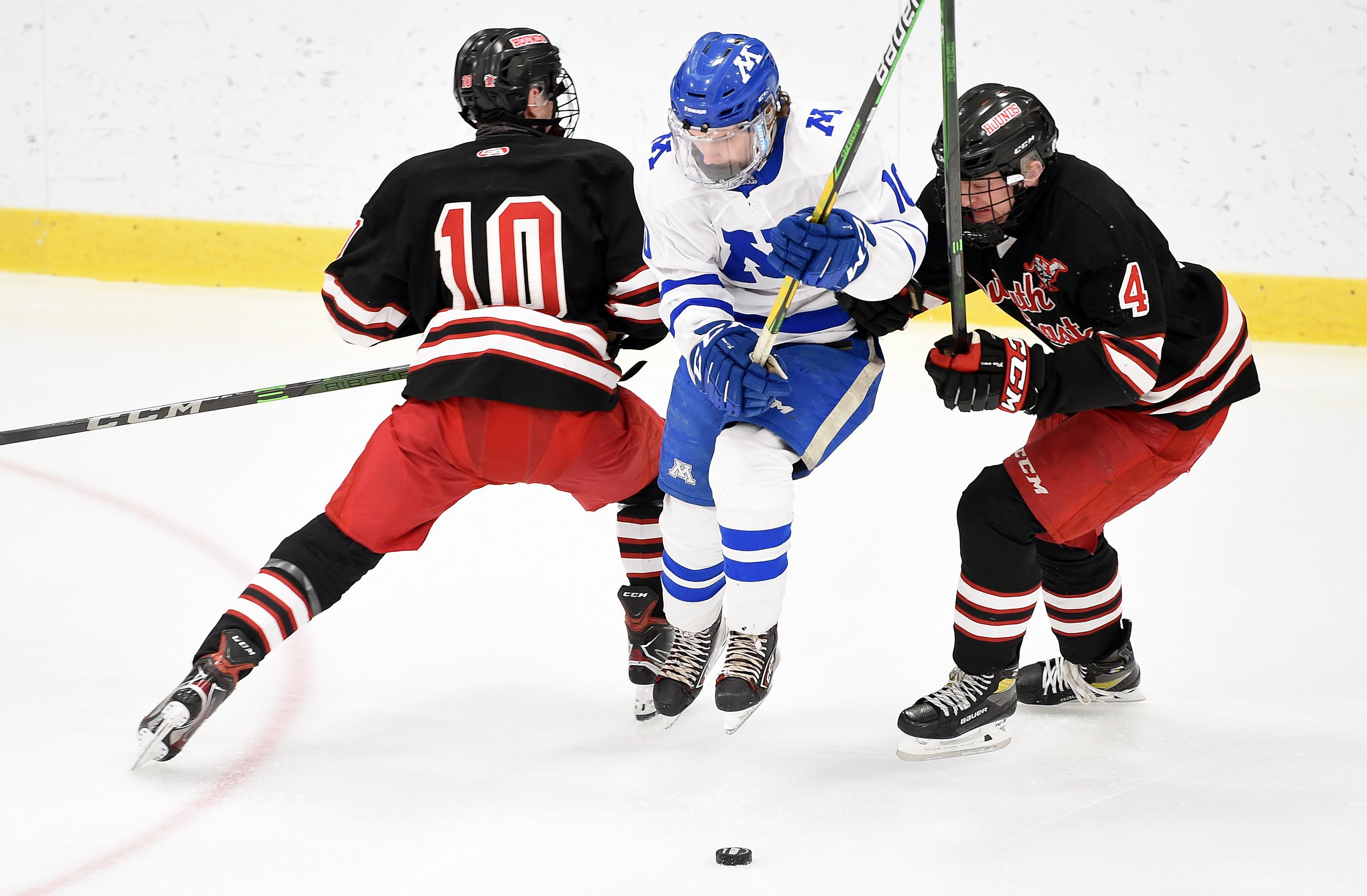 Seniors Duke Kiffin and Hunter Newhouse have been Minnetonka varsity regulars since they were sophomores. In high school years that makes them ancient, on par with, say, a 40-year-old playing quarterback in the Super Bowl.

All that experience came in handy for the Skippers on Thursday night as they leaned heavily on their penalty-killing unit — spearheaded by Kiffin and Newhouse, among others — to outlast Duluth East 4-2 at the Pagel Activity Center in Minnetonka.

“This is their third year, they’ve played over 50 or 60 games,” Minnetonka coach Sean Goldsworthy said. “They could probably teach the kill at this point.”

Minnetonka took six penalties and killed off four Duluth East power plays, including an extended 5-on-3 Greyhounds advantage to start the third period. It was only fitting that Newhouse’s second goal of the game came shorthanded with 7:04 remaining in regulation.

“This was one of Newy’s best games of the year so far,” Goldsworthy said about the forward who was a standout in the Upper Midwest High School Elite League this fall and leads the Skippers with 12 points. “He was on the puck all night long. I thought he had a couple of really good opportunities that didn’t go in early, so it was kind of justice that he got one on at the end there.” 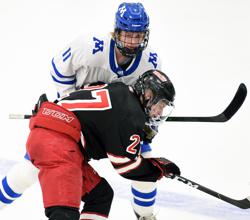 Kiffin agreed: "I thought he was skating circles around them out there."

Newhouse finished a pretty series of passes while on a 2-on-1 break with Graham Harris, tapping home the final pass that was threaded through the crease to collect his second goal of the night and give the Skippers their two-goal advantage with time running out in the third.

“That was good to kind of cut off their air, not let them back into it,” Newhouse said.

Minnetonka (5-3-0) scored three goals in the opening 12 minutes, 2 seconds and appeared well on its way to a rout of the Greyhounds (4-3-1). But second-period goals by Brady Gray and Kaden Nelson injected a spark into the Duluth East bench, and the Greyhounds continued to feed off big hits and blocked shots from there.

“That’s up-north hockey for you,” said Kiffin, who also starred in the Elite League this fall. “Last year we were kind of in the same situation. We outshot them probably two to one. But they hung in there. They’ve got a good coach over there, and they know what they’re doing.”

Duluth East’s Mike Randolph, with more than 650 career victories and two state titles in his 33 seasons as a head coach, said he’s still evaluating his roster. After the first period, he saw a lot that he liked.

The COVID-19 pandemic has limited the ability for teams in all sports and school districts to travel outside their immediate regions. Randolph, who usually takes his Greyhounds on a half dozen or more trips to the Twin Cities in an effort to play top-caliber competition, had to drastically reduce his road trips this winter.

“This is as good of a team as we’ll see in section play,” said Randolph, whose Greyhounds were coming off a 5-1 loss on Tuesday to Hermantown, the top-ranked team in the Class 1A coaches' poll. “This was a week for finding out about players and who we are.”

Goldsworthy, for one, knows the challenges the Greyhounds present no matter the season.

“It’s always fun to play Mike’s teams,” he said. “They are solid. They play the game the right way. They are always hard to play against. You can’t put them away.”

Senior forward Hunter Newhouse scored twice, including a shorthanded goal with 7:04 remaining in the third period as Minnetonka held off Duluth East 4-2 on Thursday night at the Pagel Activity Center.

Newhouse finished a 2-on-1 with teammate Graham Harris to collect the shorthanded tally that gave the Skippers (5-3-0) a 4-2 lead and took some of the life out of a scrappy Duluth East team (4-3-1) that had rallied from a 3-0 first-period deficit with two second-period goals.

Newhouse also scored what proved to be the winning goal with 4:58 left in the first period as Minnetonka outshot the Greyhounds 12-2 in the opening period.

Ben Konen and Jack Quinn also scored in the first period for Minnetonka. Brady Gray and Tyler Smith had the second-period goals for Duluth East.

Minnetonka was assessed three penalties for six minutes in the third period. The Skippers also had taken a penalty late in the second, setting up an extended 5-on-3 power play for Duluth East. The Greyounds finished 0-for-4 on the power play while Minnetonka was 0-for-1. 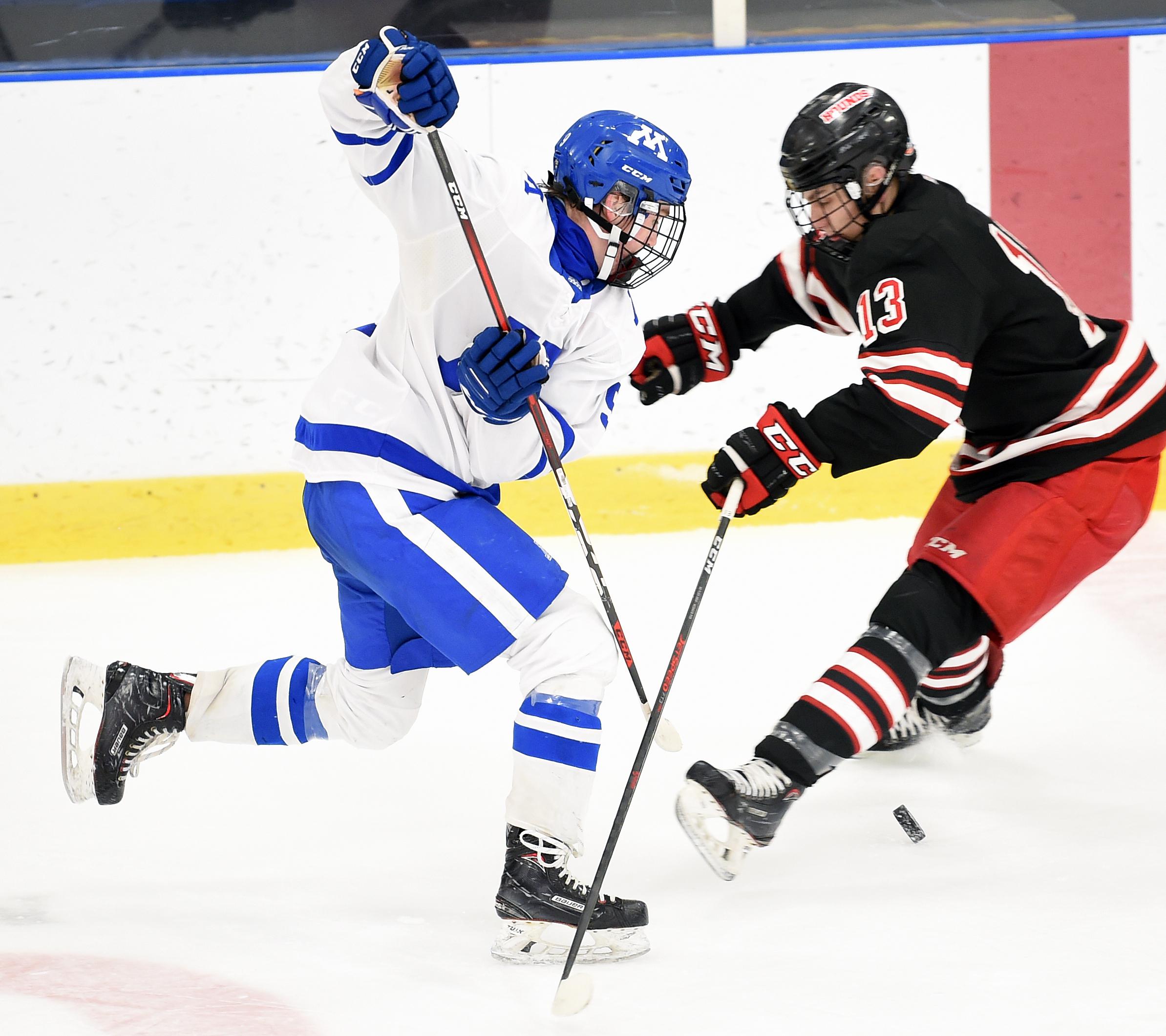