Best of the Broncos 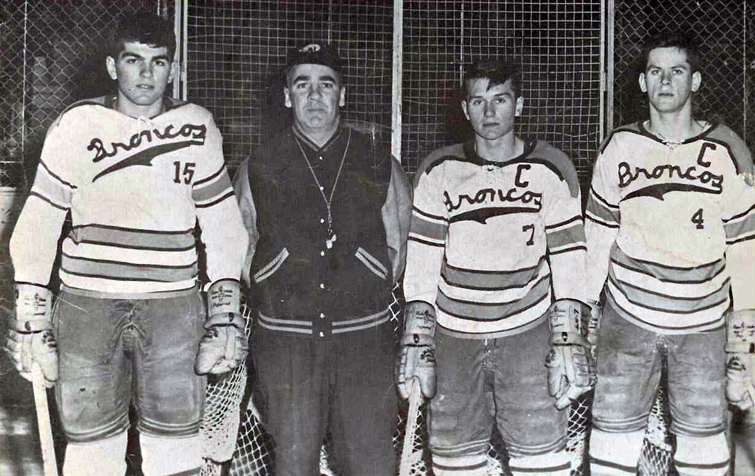 Larry Ross was International Falls’ hockey coach, but he might just as well have been the northern Minnesota border town’s mayor.

What Ross said was law. What Ross wanted he got.

In the early 1960s, Ross wanted freshmen to play on the Broncos’ varsity. The town’s high school housed sophomores through seniors, and freshmen attended the middle school. They weren’t allowed on varsity rosters by school board rule.

Ross, who was a fixture at youth hockey games around town, hadn’t worried much about the no-freshmen policy until 1963, when a youngster by the name of Timothy Kane Sheehy entered the ninth grade.

Sheehy had size, speed, toughness and unmatched athleticism. He could stickhandle, skate, shoot and score. Sheehy, the nephew of legendary football star Bronko Nagurski, had led International Falls’ Pee Wee and Bantam teams to state championships. He was a proven winner. 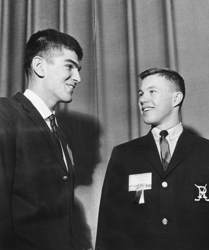 Ross, who had guided International Falls to state titles in 1957 and 1962 and was on the verge of building the program into one of the state’s all-time great dynasties, had been watching Sheehy for years.

He had to have him on the varsity.

Just like that, the “no freshmen” rule was abolished.

Sheehy and longtime friend and linemate Dan Mahle, a big, bruising winger with a knack for getting Sheehy the puck, were freshmen moved up to the varsity for the 1962-63 regular season stretch run.

Sheehy and Mahle didn’t get top-line billing. Not right away.

“Larry had decided he didn’t want to move them along too fast,” Jim Amidon said. “If they had played more, we might not have lost that game to St. Paul Johnson.”

“That game” is infamous in International Falls hockey folklore. The undefeated Broncos, coming off the 1962 state championship and featuring the brilliant Amidon at center and an irrepressible sophomore line of Pete Fichuk, Tony Curran and Keith Bolin, again reached the championship game in 1963.

Amidon scored in the final minute of the third period to force overtime, but the Governors’ beat the Broncos 4-3 on a goal by Rob Shattuck.

Sheehy and Amidon, neighbors who had become close friends despite their four-year age difference, were the last ones out of the locker room after the devastating loss.

To break the uncomfortable silence, Amidon suggested that maybe the team could win the state championship the next season. Sheehy had bigger aspirations. He insisted the Broncos would win the next three state titles. Amidon had his doubts.

A wager was placed.

International Falls not only won the next three state championships, they did so in scorched-ice fashion. The Broncos exacted their revenge in the 1964 title game, routing St. Paul Johnson 7-3. Undefeated seasons in 1965 and 1966 were culminated by two more championship game blowouts, a 7-0 whitewash of Bloomington in ’65 and 5-0 rout of Roseau in ’66. 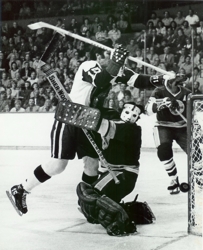 Sheehy, who was also the quarterback of the football team, stood 6-1½ and weighed 185 pounds as a senior. A smooth skater with incredible speed and agility for his size, Sheehy had a knack for finding soft spots in opposing defenses. With Mahle and shifty playmaker Peter Hegg as his linemates, Sheehy left a vapor trail of would-be defenders in his wake.

The Broncos’ superstar scored a mind-blowing 54 goals and added 42 assists as a senior as the Broncos pushed their unbeaten streak to 58 games.

“We got accused of just feeding Timmy the puck all the time,” said Mahle, who was a 6-3, 195-pound block of granite. “Even Larry (Ross) would always say, ‘Why do you always pass it to Sheehy?’

“I would say, ‘God, he is always right there. Why wouldn’t I pass him the puck? He scores the goal, and we win the game. Isn’t that the best way to go?’ ”

As a sophomore, Sheehy scored the winning goal in a tough 3-2 win over Richfield in the state semifinals. As a junior, he registered a hat trick in a 5-1 state semifinal triumph over South St. Paul.

In the 1966 state semifinals it was Sheehy (who else?) once again grabbing the spotlight. He scored the game winner, with an assist from Mahle, in a 2-1 victory over South St. Paul. Sheehy was named to the all-tournament team three straight years.

“There were other players that were good athletes, but they only did as much as they had to,” Mahle said. “That wasn’t Tim. He put in his time. He was definitely a rink rat.

“If he had a weakness, he worked on it. The only weakness I knew Timmy had in high school was skating backwards, because he never had to skate backwards.”

Much like the high-energy – and often hot-tempered – daily practice battles between lines centered by Amidon and Keith “Huffer” Christiansen in the early 1960s, the Sheehy and Fichuk lines pushed the other to the extreme.

Sheehy and Mahle had the advantage in size. Fichuk’s group had the edge in experience. Motivation wasn’t a problem.

“We certainly didn’t want to let the younger guys get the better of us,” Fichuk said.

Ross, kept a close eye on those scrimmages, knowing full well he was sitting on a powder keg. Still, he didn’t mind the occasional temper flare or corner confrontation. It was all part of the plan to keep the state’s two best lines running at peak competitiveness.

“I think it really kept everybody on their toes,” Sheehy said about the Broncos’ maximum intensity practices. “We all forced each other to get better. It worked out. To this day everybody is still friendly.”

Sheehy had his pick of more than a dozen major college programs coming out of high school. Hungry to get away from home, he accepted a scholarship offer from Boston College coach John “Snooks” Kelley.

Sheehy scored 28 goals in 21 games as a freshman. He scored 27 goals as a sophomore and was featured in a Sports Illustrated article titled “Found – A Native Who Outplays the Imports” as a junior in 1969.

Sheehy was captain of the 1972 U.S. Olympic team that won a surprising silver medal in Sapporo, Japan.

As rookie in the WHA, Sheehy scored 33 goals and added 38 assists in 78 games for the New England Whalers. Sheehy played seven seasons in the WHA. He broke into the NHL in 1977-78 with the Detroit Red Wings, playing 15 games. He also played 12 games for the Hartford Whalers in 1979-80.

Sheehy, who retired from pro hockey in 1980, is a player agent living in the Boston area.