Despite missing his star linemate for nearly a period, Carter Batchelder scored two goals and led Eden Prairie to the victory Tuesday night.

A small, seemingly random cheer came out of the Eden Prairie fan section midway through the second period of Tuesday’s game against Benilde-St. Margaret’s.

The fans, limited to 150 or so at the Eden Prairie Community Center because of COVID-19 protocols, alertly noticed that junior forward Jackson Blake had returned to the Eagles bench. Blake, who had been averaging a stunning four points per game, went down hard into the boards at the end of the first period and appeared to barely be able to stand as he required assistance to hobble off the ice. At that point, his return seemed doubtful at best.

“He comes back on the bench, and the crowd got us going with the claps,” Eden Prairie senior Carter Batchelder said after scoring twice in the Eagles’ 4-1 triumph over the previously unbeaten Red Knights. “We were happy. And that first shift was huge, we got a ton of momentum back.” 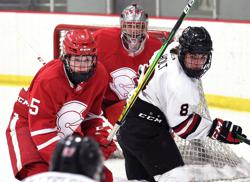 With Blake’s return, all was right with the Eagles. Batchelder celebrated by notching his second goal of the game and 16th of the season to put the Eagles ahead 3-0.

Blake, Batchelder and linemate Drew Holt were on the ice for all three of the Eagles’ initial goals. They form an unstoppable trio that has amassed a combined 75 points for Eden Prairie (9-1-0), which entered the matchup ranked No. 3 in the state Class 2A coaches’ poll. Benilde-St. Margaret’s (10-1-0) is ranked No. 2 in Class 2A.

“They throw out four or five guys of the caliber you aren’t going to see on any other team,” Red Knights coach Ken Pauly said, referring to the Blake-Batchelder-Holt line that at times was accompanied by star defensemen such as Luke Mittelstadt (committed to Minnesota) and Mason Langenbrunner (committed to Harvard). Blake has committed to North Dakota and Batchelder to Colorado College.

Blake, who joined the Eagles two weeks into the season after spending the fall playing for the Chicago Steel of the USHL, had scored at least three points in all six of his games entering Tuesday’s matchup with the Red Knights. When Batchelder, who plays center, saw his right wing go down his heart jumped into his throat.

“I saw two guys fall on top of him,” Batchelder said. “He looked like he went into the boards headfirst, did the splits. When I went over to try to help him up he couldn’t move. I was like, 'Oh no, this isn’t good.'

“Then he came into the locker room and he started walking on it, I knew he would be fine. Tough kid.”

Blake, still in pain after the game, said at first he thought he had broken his ankle.

“But then I started walking on it, and it got better and better,” he said.

“He’s a special player, one of the most talented players that has ever put on an Eagle jersey,” Eden Prairie coach Lee Smith said about Blake. “It would have been devastating to lose him.” 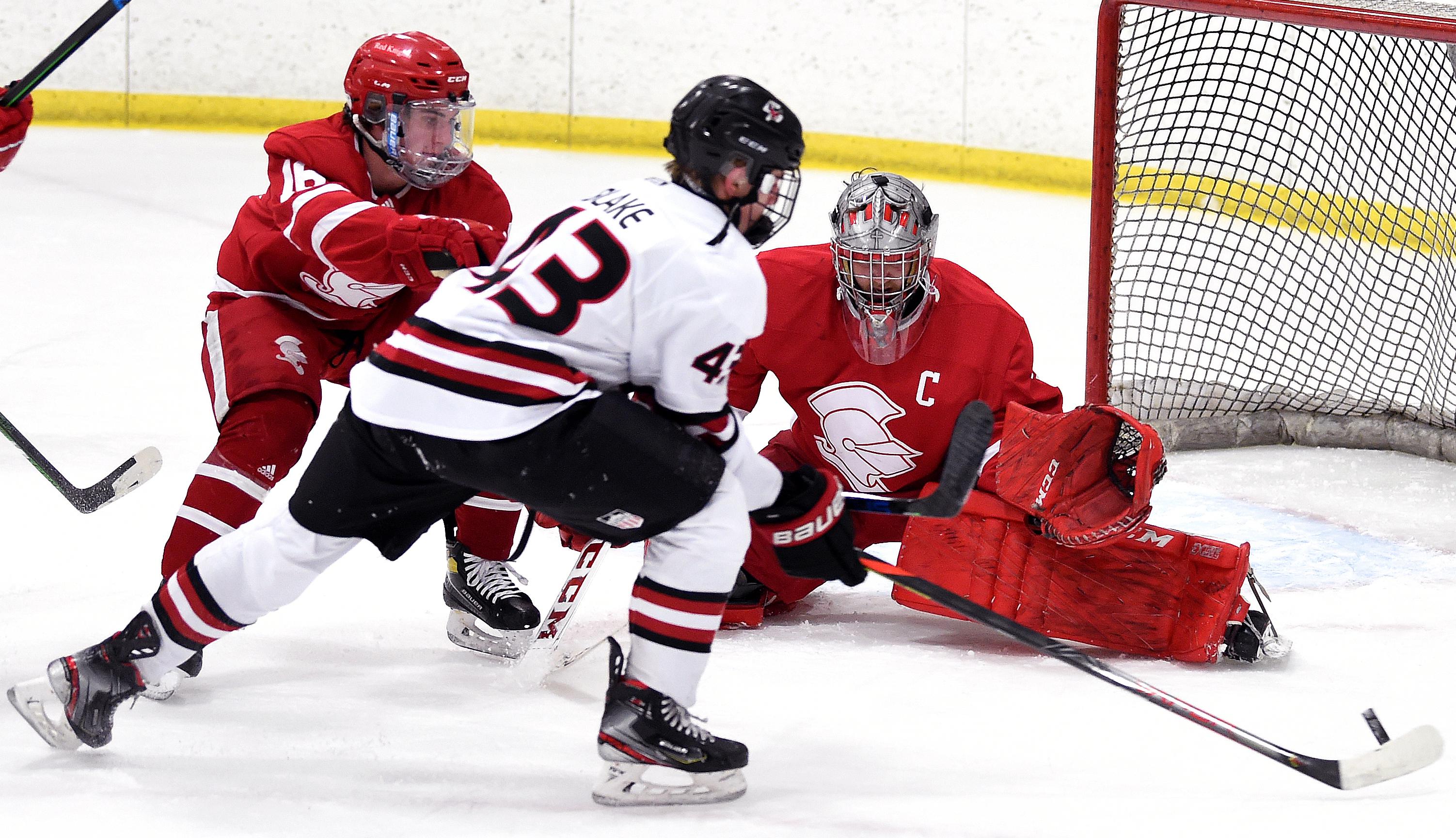 Eden Prairie's Jackson Blake stretches for a rebound just before crashing into the end boards late in the first period of Tuesday's game against Benilde-St. Margaret's. Photo by Loren Nelson, SportsEngine

Senior forward Carter Batchelder scored twice and and senior goaltender Zach Hayes stopped 24 of 25 shots on Tuesday as Eden Prairie, ranked No. 3 in the Class 2A coaches' poll, knocked No. 2-2A Benilde-St. Margaret’s from the shrinking list of state unbeatens, defeating the Red Knights 4-1 at the Eden Prairie Community Center.

Batchelder notched his first goal with 5:17 left in the first period to put Eden Prairie (9-1-0) ahead 2-0. He scored the lone goal of the second period as the Eagles surged ahead of the 3-0 entering the third. The goals were Batchelder’s team-leading 15th and 16th of the season, placing him among the state’s goal-scoring leaders.

Adam Marshall scored a power-play goal with 1:37 remaining for the Red Knights (10-1-0) as they pulled to within 3-1. Eden Prairie’s Riku Brown answered with a goal just 19 seconds later.

Luke Mittelstadt opened the scoring for Eden Prairie in the first period.

Eden Prairie suffered a scare late in the first period when standout junior forward Jackson Blake went down along the boards and didn’t get up for several minutes. He received treatment between the first and second period, and his return to the ice midway through the second coincided with Batchelder’s second goal.