Newhouse powers Minnetonka past Prior Lake in section semifinal

Hunter Newhouse scored twice for the Skippers, sending them to next week's Class 2A, Section 2 championship game. 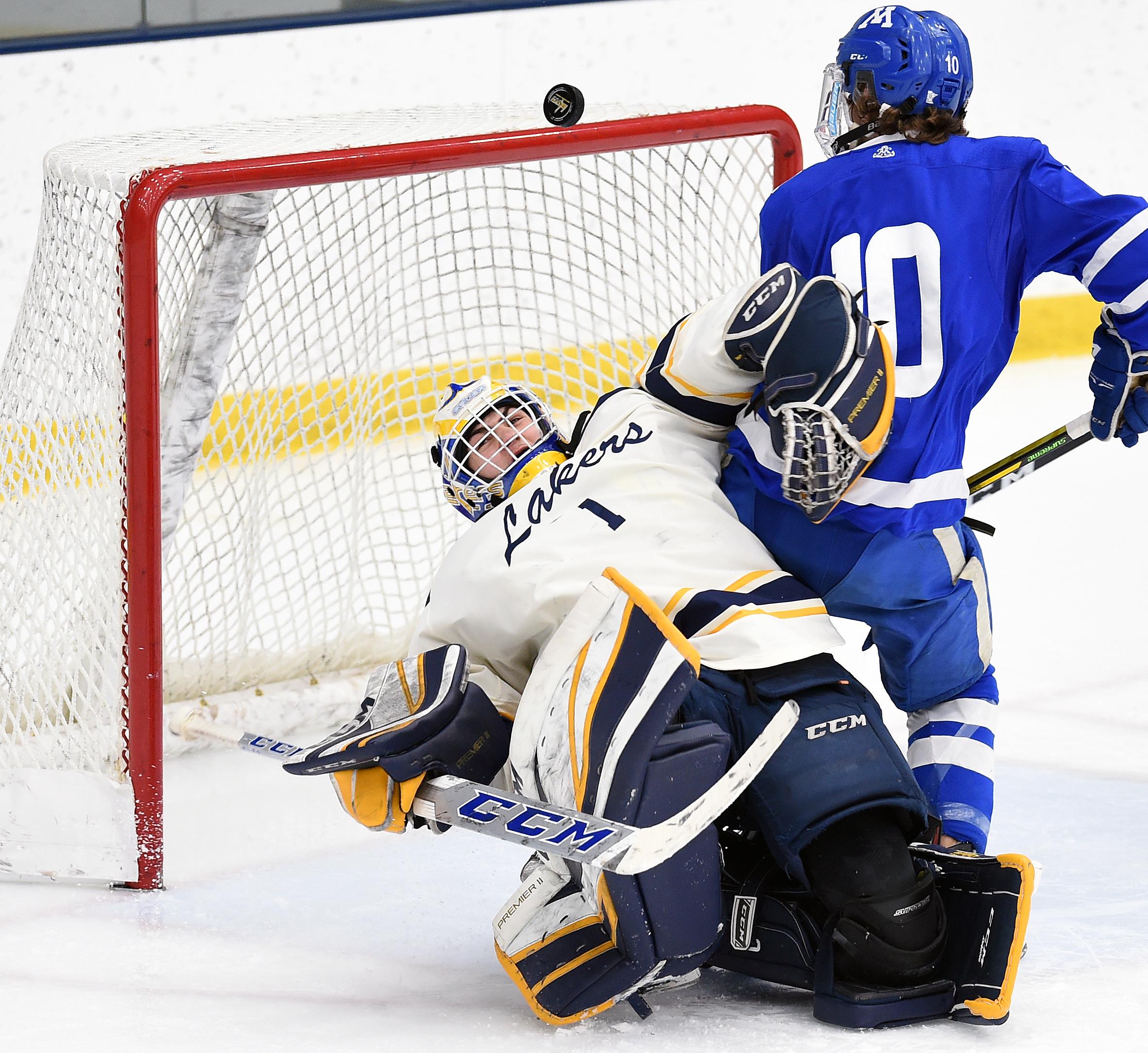 Minnetonka's Hunter Newhouse gets tangled with Prior Lake goaltender Trevor Boschee as the puck drops into the net for a third-period goal. The Skippers defeated the Lakers 3-1 on Saturday. Photo by Loren Nelson, SportsEngine

Hunter Newhouse’s impact on a hockey game is akin to that of a hurricane making landfall.

So when Minnetonka coach Sean Goldsworthy says Newhouse plays a 200-foot game, there isn’t a hint of hyperbole in the statement. Minnetonka’s senior forward seemingly was everywhere doing anything possible to help the Skippers secure their 3-1 Class 2A, Section 2 semifinal victory over Prior Lake on Saturday at the Dakotah! Ice Center in Prior Lake.

“I thought Newhouse carried us tonight,” Goldsworthy said. “He plays both ends of the rink. He can skate all day. He rarely ever hits a point where he gets tired.” 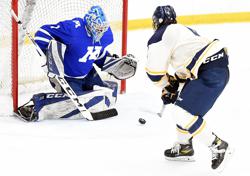 Photo Gallery: Minnetonka vs. Prior Lake

That last part was especially important in the third period, when Newhouse scored a bizarre shorthanded goal after getting a piece of the puck that rocketed straight up upon hitting Prior Lake goaltender Trevor Boschee. Newhouse and Boschee collided, sending both sprawling to the ice, as the puck dropped out of the rafters and plopped into the net for a 3-0 Minnetonka lead with 12:40 to go.

A power-play goal by Bennett Soderberg a minute later gave Prior Lake an infusion of energy, and Newhouse played most of the rest of the game in a successful effort to blunt the Lakers’ final, frantic attack.

“In that kind of game, I don’t know if you can get tired,” said Newhouse, who also scored a power-play goal on a blistering shot from the slot in the first period. “It's so exciting. So much adrenaline. It's hard to get tired out there.”

The command performance was perfectly in character for Newhouse, who leads the Skippers with 12 goals and 25 points this season. In recent weeks, he scored goals in the waning seconds of regulation in eventual ties with Lake Conference juggernauts Wayzata and Eden Prairie.

“He played a great game today,” Minnetonka senior defenseman Duke Kiffin said about Newhouse. “And that's what you need, you need your big-time players to step up in big-time games.”

Kiffing said Newhouse has a penchant for taking long shifts, sometimes incurring the wrath of Minnetonka forwards coach Steve Aronson. Still, there isn’t anyone else the Skippers or their coaches wanted on the ice in the waning minutes Saturday.

“They usually let him go out there when he's fresh because he's got legs for days, and legs feed the wolf,” Kiffin said.

Newhouse’s play was undoubtedly pivotal in allowing the No. 3-seeded Skippers (12-6-2) to upend No. 2 seeded Prior Lake (14-3-2). But Minnetonka senior goaltender Kyle Briesemeister had a similar-sized impact. He made 27 saves as the Skippers were outshot 28-25 and limited Prior Lake, ranked No. 9 in the Class 2A coaches' poll, to one power-play goal on five opportunities.

Prior Lake coach Joe Pankratz was pleased with the way the Lakers controlled long stretches, most notably during the opening stages of the second period before a parade of penalties called on both teams doused their momentum.

“I think shots at one point were 18-7 in our favor but the score was 2-0 for them,” he said. “Their goalie was solid. He made every save and he didn't give up any rebounds. He Velcroed every puck that was shot on him.” 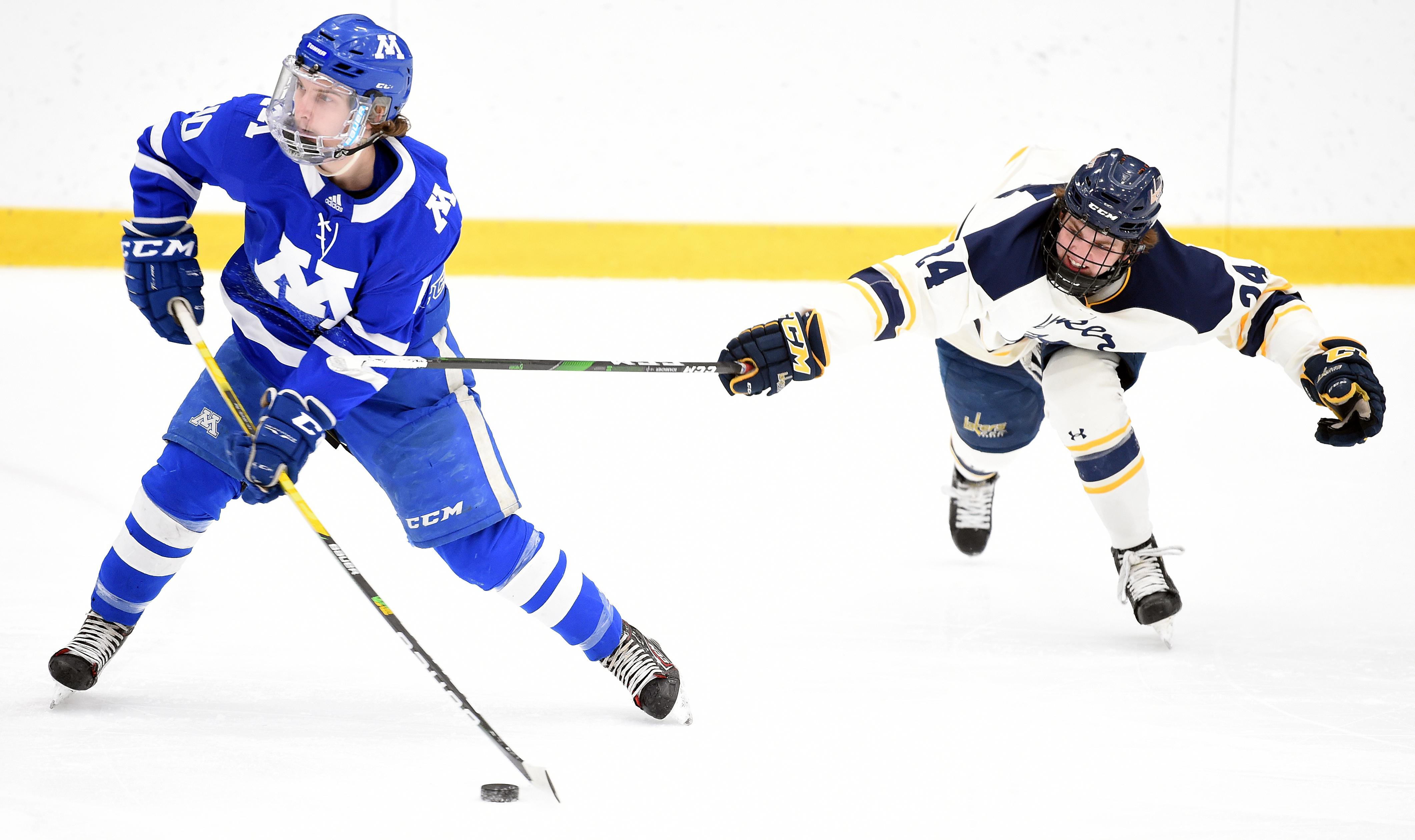 Minnetonka's Hunter Newhouse unloads a shot that results in a first period power-play goal. The Skippers defeated Prior Lake 3-1 on Saturday to advance to the Class 2A, Section 2 final. Photo by Loren Nelson, SportsEngine

Hunter Newhouse scored twice and Kyle Briesemeister made 27 saves as Minnetonka held off Prior Lake 3-1 in a Class 2A, Section 2 semifinal on Saturday at the Dakotah! Ice Center in Prior Lake.

Newhouse, a senior forward, scored the lone goal of the first period on a power play and added a shorthanded goal to put the No. 3-seeded Skippers (12-6-2) ahead 3-0 in the third period. The goals give Newhouse a team-best 12 tallies this season. He’s also Minnetonka’s scoring leader with 25 points.

Briesemeister, who split playing time with fellow senior goaltender Anders Irene to start the season, continued his brilliant late-season play. He made 10 of his saves in the third period and was an integral part of a Skippers penalty killing unit that held No. 2 seed Prior Lake (14-3-2) scoreless on two 5-on-3 power play opportunities.

Prior Lake, ranked No. 9 in the Class 2A coaches poll, outshot Minnetonka 28-25 but didn’t score until senior forward Bennett Soderberg’s power-play goal made it 3-1 with 11:40 remaining.

Senior forward Vinnie Farina also scored for Minnetonka. The goal was his fourth of the season.

Junior Trevor Boschee made 22 saves for the Lakers. 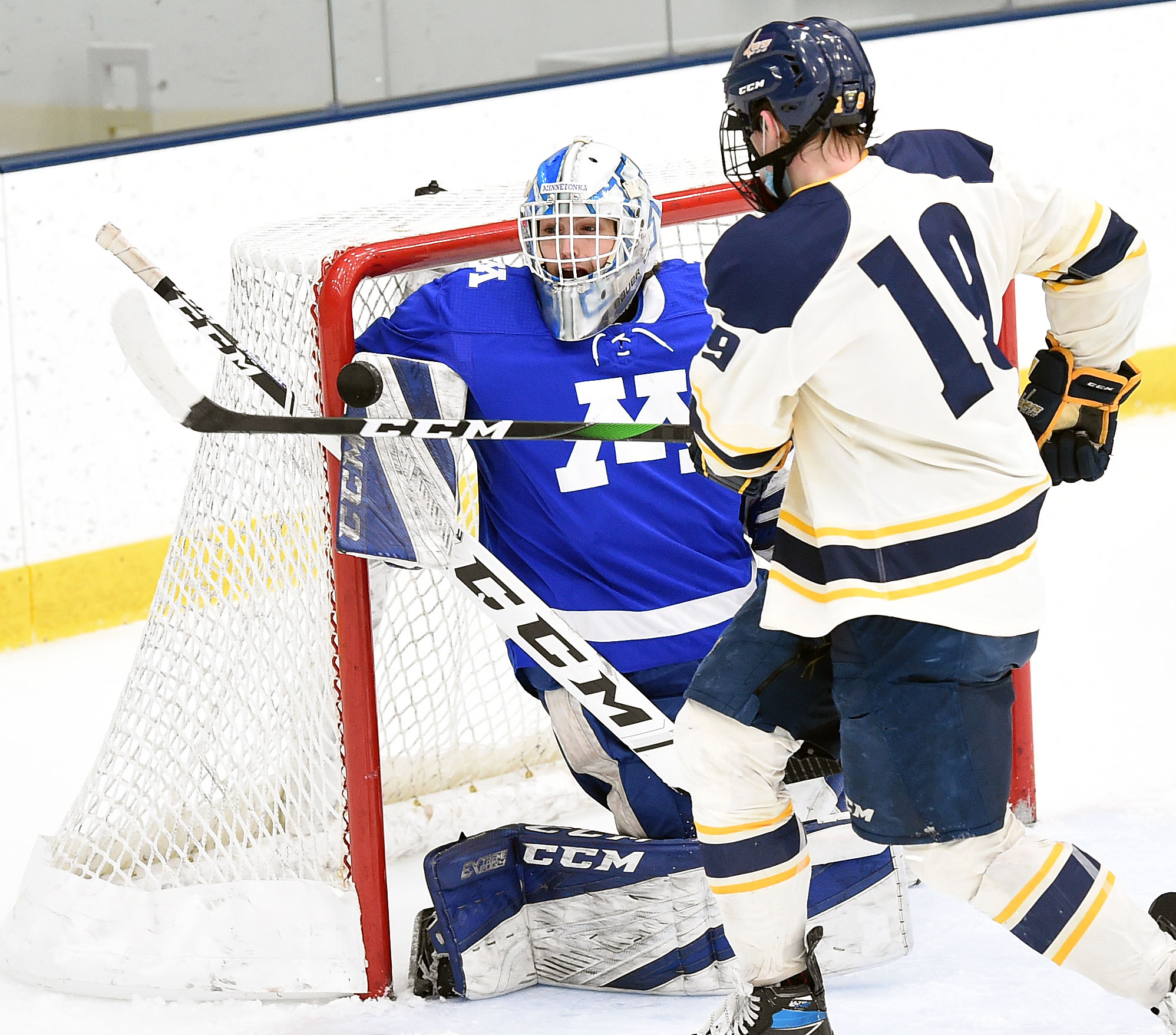 Minnetonka goaltender Kyle Briesemeister makes a second-period save in front of Prior Lake's Alex Bump. Photo by Loren Nelson, SportsEngine