Cadets' forward Tommy Deverell scored two goals to help his team clinch a berth in the Class 2A state tournament over the Irish. 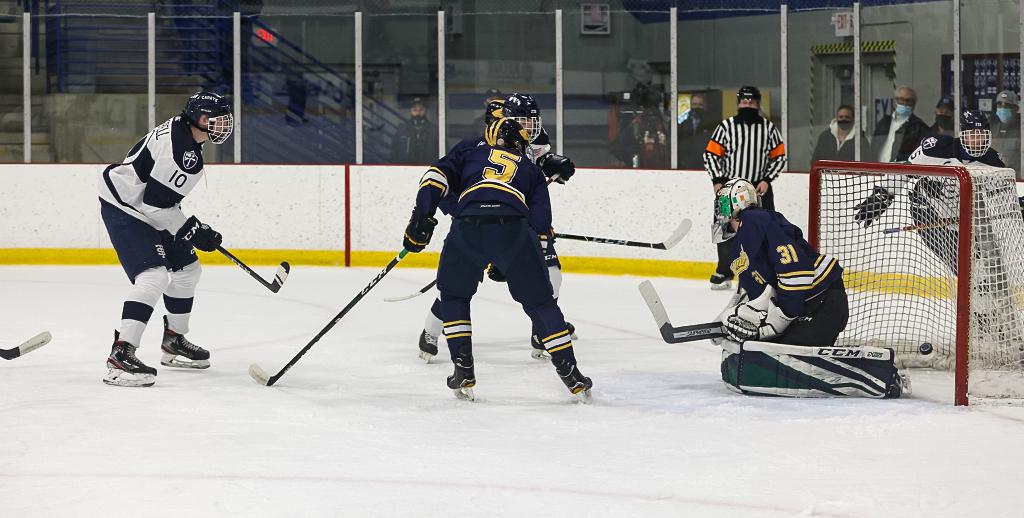 Tommy Deverell (10) launches the puck past goaltender Joey Hegarty (31), scoring a power-play goal midway through the first period. Deverell scored again in the second period en route to a 6-1 win over Rosemount. Photo by Cheryl A. Myers, SportsEngine

The end result was never in doubt for top-seeded St. Thomas Academy as it won its fifth straight Class 2A, Section 3 title with a 6-1 victory over No. 2-seed Rosemount Wednesday at St. Thomas Ice Arena.

The Cadets (13-4-3) grabbed a 2-0 lead in the first period and used a pair of goals in 33 seconds in the middle frame to extend the lead for good.

It’s the sixth section championship in seven years for the Cadets, who joined the section when it moved to Class 2A for the 2013-14 season. They’re 6-2 in section finals since the class jump.

St. Thomas Academy coach Trent Eigner credits his team’s schedule against some of the state’s top teams for preparing them this season. It defeated defending Class 2A state champion Hill-Murray in overtime, for example. 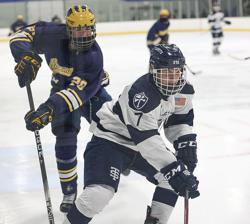 “I was proud of the way the kids executed,” Eigner said. “I think we’re really fortunate the way things shook out. We were able to put together a difficult schedule playing Eden Prairie twice and Hill-Murray twice, and Edina and Benilde (St. Margaret’s).

“I think our kids have an understanding of what we need to do to be successful against good hockey teams.”

St. Thomas Academy started Wednesday’s game fast and physical. Rosemount's defense came up with some blocked shots as the Cadets started to generate a lot of offensive zone time.

St. Thomas cashed in on the first power-play chance of the game about halfway through the period. Set up in the Irish zone, Cadets' senior Jackson Hallum skated with the puck from the top of the circles down toward the goal line. Once there, he quickly fired a pass to a waiting Tommy Deverell in the slot.

Deverell immediately shot the puck and put his team up 1-0. Hallum’s helper was his team-leading 24th and 41st point of the season for the Mr. Hockey finalist.

The Cadets doubled their lead with just under three minutes to play in the period on a great individual effort from senior Jared Wright, a Colgate commit, who drove the net, skated in front of the crease and then lifted a backhander top-shelf for his 15th goal of the season to extend his point streak to nine games. There was also that fantastic pass up ice from sophomore Tommy Cronin.

“Well, I just saw Tommy on the wall, and we’ve been doing it all year, just trying to get it wide,” Wright said. “He’s just such a great passer, as a sophomore, it’s pretty unbelievable to see. I just have so much confidence in him making that pass.”

Cronin said he sees his teammates well on the ice; he just threw the puck in the area and Wright caught up to it.

“It’s awesome to see him make a great play,” Cronin said. “It’s just really good for the team. And he had a sick celebration, too.”

The Cadets celebrated the goal along the glass on the ice in front of the Rosemount student section.

Rosemount came out with a push to start the second period, outshooting the Cadets 4-0 in the first couple of minutes. The Irish got on the board when Ryan Roszak finished off a 2-on-1 play with a pretty pass from Luke Levandowski. That made it 2-1 early in the second.

Earlier in the year, sometimes the Cadets would get deflated if they got scored on, but they were well prepared for a response this time, Deverell said.

“On the bench we kept fired up,” Deverell said. “We responded immediately and just kept it together and kept going and knew good things would come.”

Indeed, good things in the form of more quick goals would come for the Cadets before the second period was over.

Deverell scored his second of the game with a snipe-shot to put his team back in front by two. He had a good shot off a pass from his teammate Max Nagel.

“I mean, the whole line before me had worn out that line that was out against them, and they really worked them and gave me the opportunity to score there,” Deverell said.

Only 33 seconds later, his linemate junior Jack Strobel scored on a shot that was tipped for a 4-1 lead.

Rosemount couldn’t get much going in the third period and didn’t register a shot on goal until there was 6:30 left on the clock. By that time, the Cadets were up 5-1 on a Nagel goal. Tyler Grahme added an empty-netter with 1:23 to play.

Rosemount (16-4-1), appearing in it first section-championship game since 2008, lost to St. Thomas Academy for the third time in the section tournament since 2015.

“This is a big game for all the kids,” Eigner said. “So no one’s going to go down easy, and we fully expected (Rosemount) to make a little push in the second. Critical response by (Deverell) to score the third one.

“And I think once he did, our guys kind of re-engaged and pretty much took control the rest of the way.” 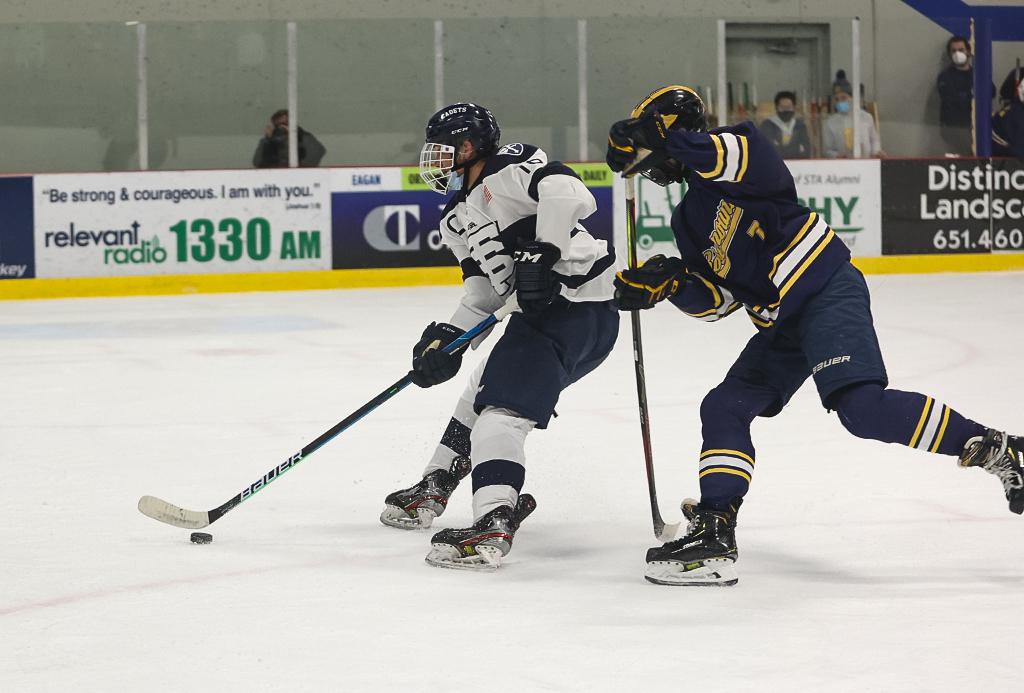 Senior Jared Wright (16) gets past a Rosemount defender and puts the Cadets up by two goals to close out the first period. St. Thomas Academy cruised to a 6-1 win in the Class 2A, Section 3 final. Photo by Cheryl A. Myers, SportsEngine

The result was never in doubt for top-seeded St. Thomas Academy as it won its fifth straight Class 2A, Section 3 title with a 6-1 victory over No. 2-seed Rosemount Wednesday at St. Thomas Ice Arena.

The Cadets (13-4-3) grabbed a 2-0 lead in the first period with a power-play goal from senior Tommy Deverell and then a top-shelf tally from senior Jared Wright with just under three minutes left in the opening period.

Rosemount made it a 2-1 game early in the second, but the Cadets followed up with a pair of goals 33 seconds apart from Deverell and junior Jack Strobel to go ahead by three. Junior Max Nagel added another in the third.

It’s the sixth section championship in seven years for the Cadets, who joined the section when it moved to Class 2A for the 2013-14 season. They’re 6-2 in section finals since the class jump.

Rosemount (16-4-1), appearing in it first section-championship game since 2008, lost to St. Thomas Academy for the third time in the section tournament since 2015. Mr. Hockey finalist senior Luke Levandowski recorded an assist and finishes the season with 22 goals and 41 points. 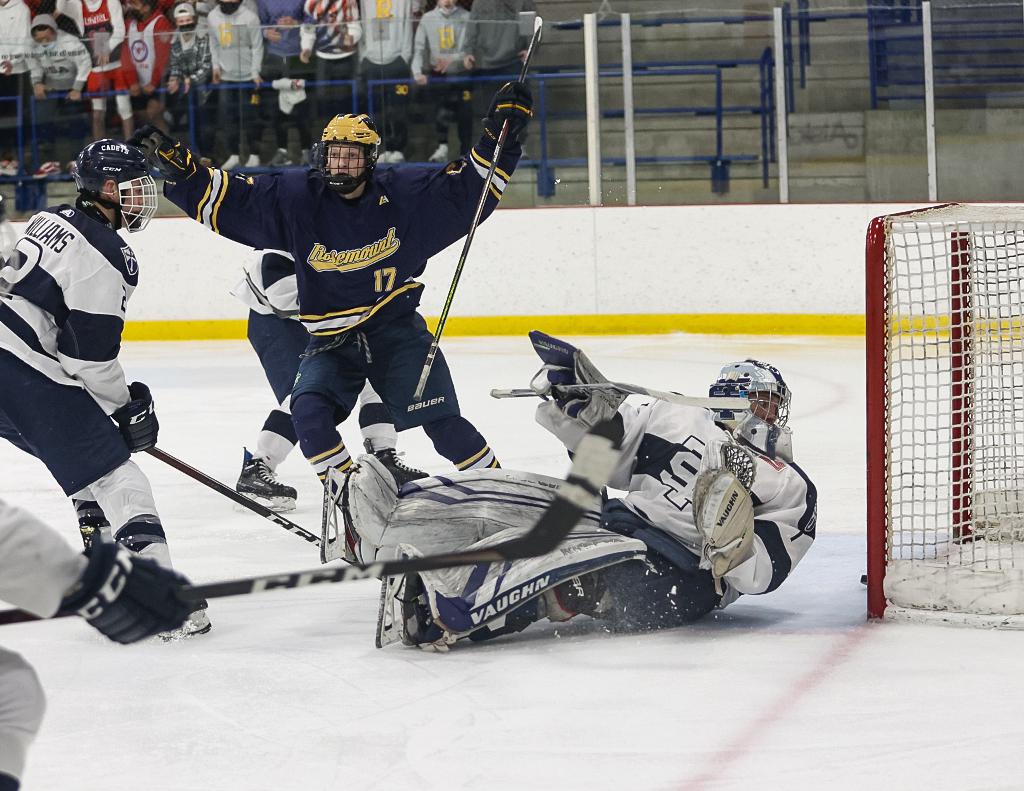 Rosemount's Luke Levandowski (17) celebrates a goal by teammate Ryan Roszak. Levandowski tallied an assist on the goal, putting the Irish within one early in the second period. Photo by Cheryl A. Myers, SportsEngine