Junior Phil Feinberg tipped in a Kam Langefels shot to give the Eagles a 4-3 victory and a trip to the Class 2A state tournament at Xcel Energy Center. 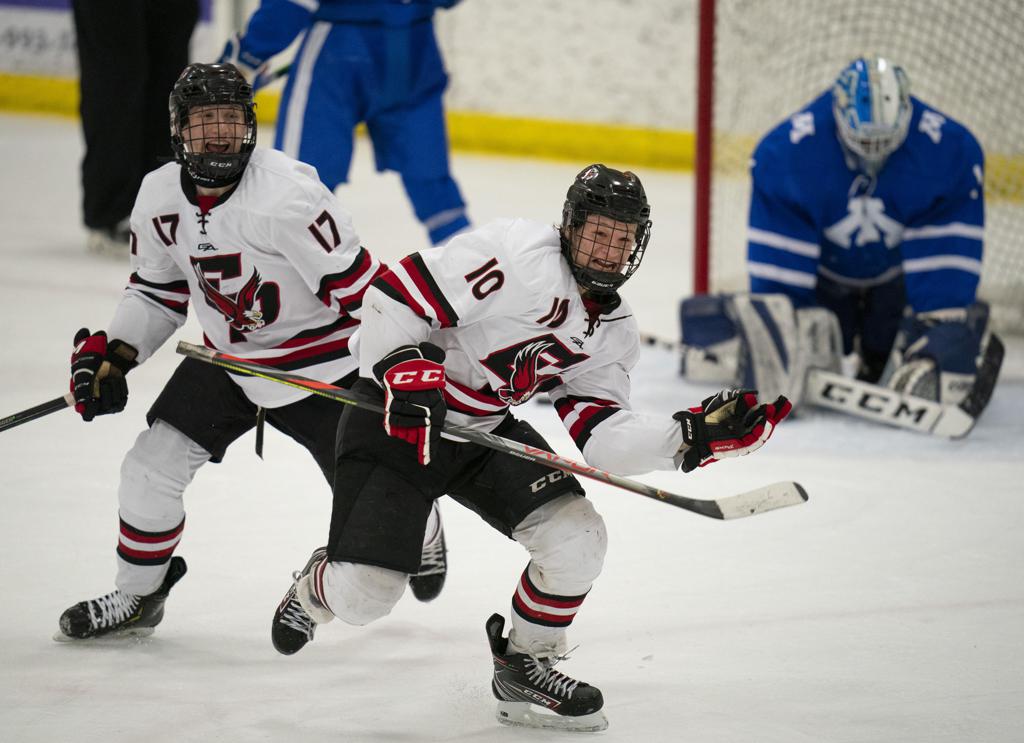 Eden Prairie boys’ hockey players entered the locker room after their 4-3 overtime victory Wednesday against Minnetonka saying “never a doubt” with a typical mix of teenage humor and bravado.

But doubt loomed in the second period as the underdog Skippers buried three goals in 62 seconds and built a 3-1 lead in the Class 2A, Section 2 championship game at the Eden Prairie Community Center.

“We were reeling,” said Eagles’ coach Lee Smith, who called a timeout to re-group. “I just wanted to get through the period without any more damage.”

No. 3-ranked Eden Prairie (18-1-2) had defeated Minnetonka 9-5 on Feb. 6 but the Skippers played them to a 2-2 draw in a March 5 rematch. The common thread in those games, one that extended into Wednesday’s playoff showdown, was the Skippers’ refusal to concede.

As No. 12-ranked Minnetonka (12-7-2) prepared for a second-period faceoff in the Eagles’ zone trailing 1-0, fans clad in blue and white rose to their feet, imploring their boys to pounce. Graham Harris answered with the equalizer.

Ten seconds later, after Minnetonka attacked off the center-ice faceoff, Hunter Newhouse pushed home the puck for a 2-1 lead.

Then Harris put away a rebound and Minnetonka’s 3-1 lead forced Smith’s request for a breather.

“They are one of the most resilient groups I’ve ever coached and I’ve been doing this a long time,” Minnetonka coach Sean Goldsworthy said.

That same trait fuels the Eagles, runners up in the past two state tournaments. Carter Batchelder got Eden Prairie off the mat with a power-play goal at 9:23 and the wild period ended with Minnetonka holding a 3-2 lead.

The Eagles received two additional power plays in the third period and Drew Holt knotted the game 3-3 on the second man-advantage.

“He’s a hero now,” Smith said of Feinberg, a second-line right wing. “He’s someone that plays every shift really hard. He’s willing to go to the tough areas. And that paid off.”

Eden Prairie fought back from a two-goal deficit to edge Minnetonka 4-3 in overtime Wednesday in the Class 2A, Section 2 championship game.

Phil Feinberg tipped a Kam Langefels shot into the back of the net at 2:01 of the first overtime period. Feinberg, a junior forward, tallied just his second goal of the season.

The Eagles regrouped with two power-play goals to force overtime at the Eden Prairie Community Center.

The Eagles had defeated Minnetonka 9-5 on Feb. 6 but the Skippers played them to a 2-2 draw in the March 5 rematch.