Nick Sajevic spearheaded the Stars' attack, recording a hat trick and an assist. 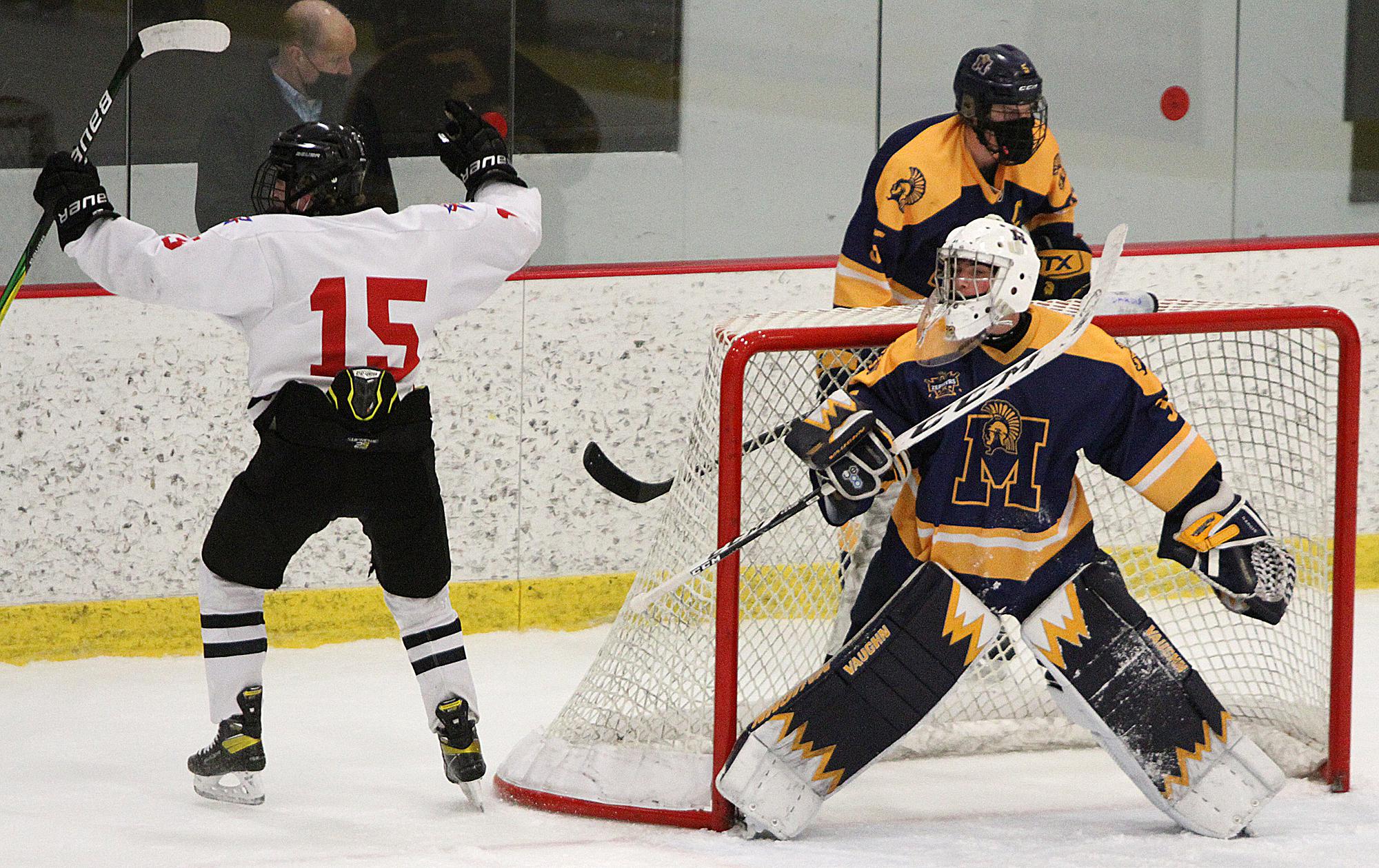 Is it better to be good than lucky? Or is being lucky preferable to being good?

Nick Sajevic has such an abundance of speed, plethora of shooting skills and bounty of puck savvy that luck doesn’t really fit into his game-breaking formula.

Which brings us to the Gentry Academy senior forward’s goal to end the first period during the Stars’ 7-3 victory over Mahtomedi on Thursday night in the Class 1A, Section 4 championship at TCO Sports Garden in Vadnais Heights.

Sajevic had just failed to convert a breakaway, and he and puck ended up behind the Mahtomedi net. Sajevic made what appeared to be a centering pass, but the puck instead banked off Mahtomedi goaltender Ben Dardis and into the net, giving the Stars a 3-1 lead with 51 seconds left in the opening period. 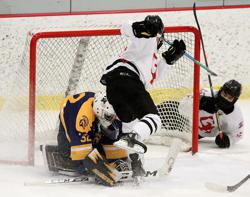 Gentry Academy’s coaches and players have seen Sajevic do some amazing things with the puck, specifically fire rocket shots that opposing goaltenders have no chance to react to, much less stop. Sajevic’s breakaway goal 36 seconds into the first period was one of those lasers. But his bank shot off Dardis was something different, and inquiring minds on the bench wanted to know if it was planned or happenstance.

“We asked him, ‘Was that accident?’ ” said Gentry Academy coach Joe Cullen said after the Stars qualified for the state tournament for the first time in the programs’ three years of existence. “Nope. He knows what he's doing. That’s just a hockey intuition thing.”

Said Sajevic: “I just shot it from behind the net and it went in."

Sajevic finished with three goals as the top-seeded Stars, ranked No. 1 in the Class 1A coaches poll, overwhelmed the No. 2-seeded and No. 4-ranked Zephyrs, the defending state Class 1A champions.

“Just took a shot and I got lucky,” Sajevic said.

While Sajevic was busy doing what goal scorers do, the rest of the Stars (16-0-0) were playing their roles to perfection, too. Gentry Academy’s superb defensemen, acting as fourth and fifth forwards, didn’t just generate an abundance of prime scoring chances, Andrew Mosley, Connor Brown and Isaiah Norlin contributed goals.

Alex Timmons, recently named as a finalist for the Frank Brimsek Award that goes to the state’s top senior goaltender, had his busiest night of the season. He made 30 saves and held Mahtomedi (12-8-1) to a single goal until the closing two minutes.

“He was amazing today,” Sajevic said. “There’s a reason he was nominated for that goalie of the year award, so it's no surprise the way he played.”

Practicing every day against the likes of Sajevic and Gentry Academy’s other sharpshooters has helped to hone Timmons’ reflexes.

“Oh my god, that man's got a wicked shot,” Timmons said about Sajevic, who has a team-best 21 goals. “It's always nice to snag him a couple times practice.”

Mahtomedi did its best to slow Gentry Academy by hitting anything and everything in red and white.

“Well, we knew that the only the only way that you can slow down speed is to to be physical, and they've got a lot of speed,” Mahtomedi coach Jeff Poeschl said. “I don't know if it was the cornerstone of our approach, but we knew that we were going to have to finish our checks.”

Gentry Academy forced the game into running time because of its six-goal lead during much of the third period. The Stars have outscored their opponents 145-16 this season.

Mahtomedi, which plays in the Metro East Conference, home to defending Class 2A champion Hill-Murray and another perennial Class 2A powerhouse in St. Thomas Academy, is one of just two teams to score more than two goals against Gentry Academy this season. The Stars have scored six or more goals in all their games.

“They are every bit as skilled as the best teams that we saw this year,” Poeschl said. “They pack a pretty tough offensive punch.” 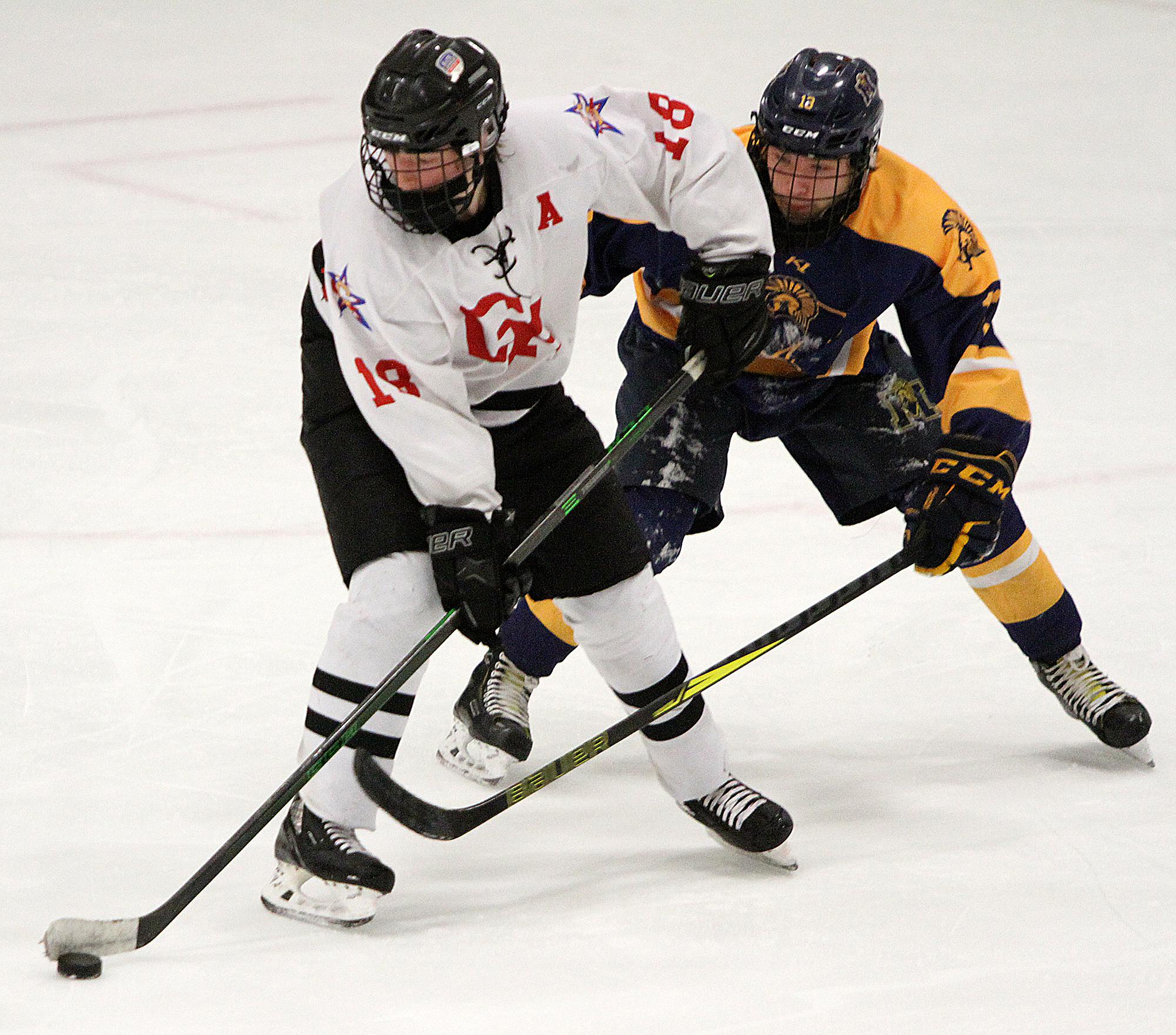 Gentry Academy senior center Nick Sajevic battles for the puck in the neutral zone with Mahtomedi's Ty Decker. Sajevic finished with three goals to lead the Stars to a 7-3 win. Photo by Drew Herron, SportsEngine

Senior Nick Sajevic scored three goals as No. 1-seeded Gentry Academy beat No. 2 seed and defending Class 1A state champion Mahtomedi 7-3 on Thursday night in the Class 1A, Section 4A championship game at the TCO Sports Garden in Vadnais Heights.

Gentry Academy, ranked No. 1 in the Class 1A coaches’ poll, improved to 16-0-0 with the victory, joining Class 2A qualifier Lakeville South as the first teams to reach the state tournament since Lakeville North in 2015.

Gentry Academy, in just its third season as a varsity program, took control in the second period, scoring twice while killing three power plays. Andrew Mosley and Connor Brown scored the goals, with Brown making a nifty head fake before ripping a shot past Mahtomedi goaltender Ben Dardis to put the Stars ahead 5-1 with 8:49 left in the period.

The Stars’ offense didn’t slow much despite the penalties. They generated some of their best chances — including several odd-man rushes — in the period while shorthanded.

Sajevic opened the scoring 36 seconds into the first period, streaking in on Dardis and rocketing a shot past the goaltender’s glove hand. The first period ended with another Sajevic goal, one that was altogether different from his first. Sajevic was behind the Mahtomedi goal and appeared to be attempting a centering pass when the puck banked in off Dardis’ skate. That put the Stars ahead 3-1 with 51 seconds left in the opening period.

The teams exchanged goals during a 33-second span midway through the first period. Mahtomedi’s David Wolsfeld completed a pretty passing play on a 2-on-1 break with Nick Beiersdorf to tie the score at 1-1 with 8:55 left in the first. Gentry Academy answered immediately with Shane Dean’s goal giving the Stars a 2-1 lead with 8:22 left.

Sajevic completed his hat trick in the third period, and the Stars also got a goal by Isaiah Norlin as they built a 7-1 lead. Adam Johnson and Ryan Berglund scored in the closing minutes for No. 4-1A Mahtomedi (12-8-1).

Daris finished with 28 saves. Alex Timmons, a finalist for the Frank Brimsek award that goes to the state’s top senior goaltender, had 30 saves for the Stars. 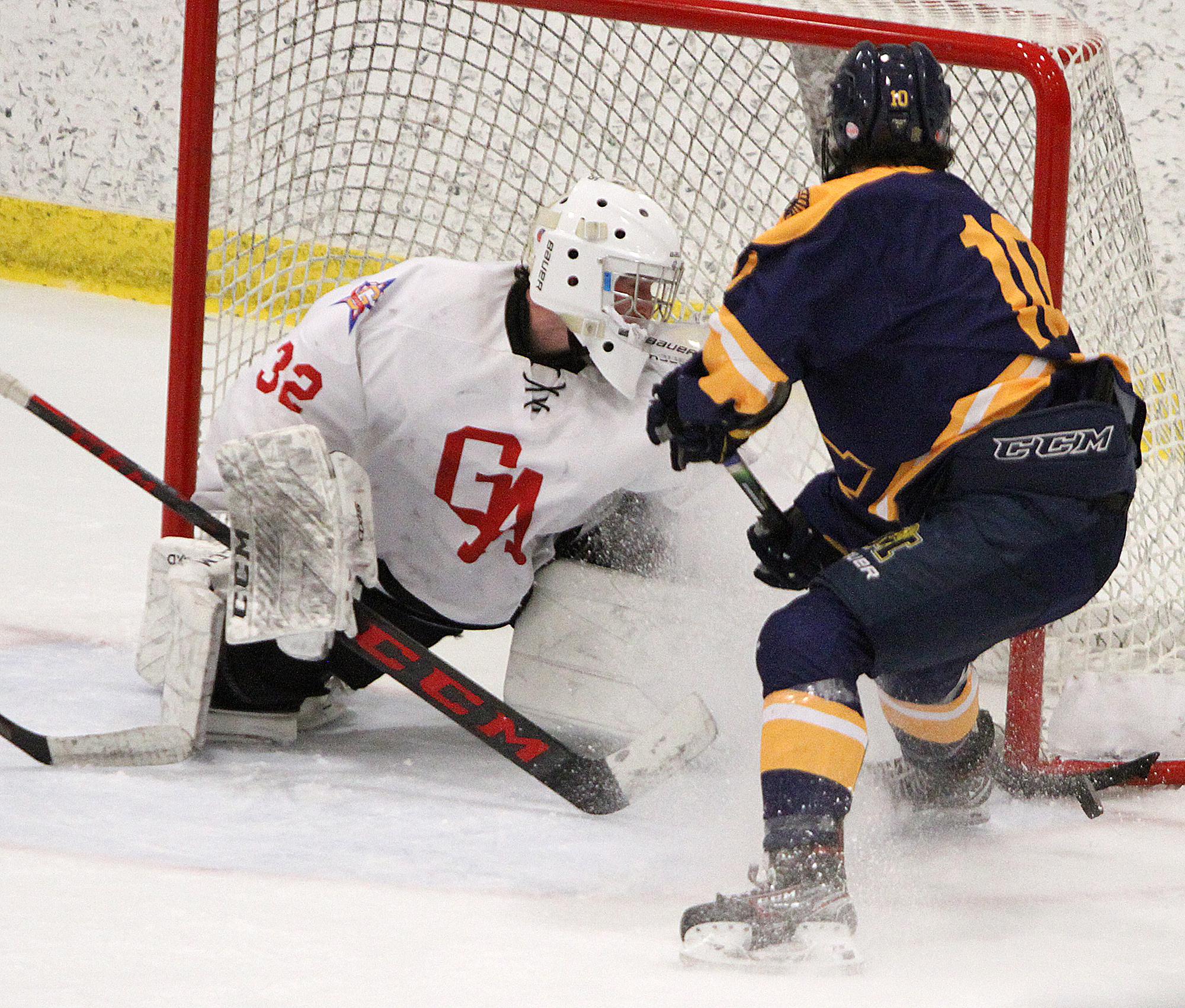