The Eagles broke open a 1-1 game in the third period with two goals in 73 seconds en route to a 6-2 victory. 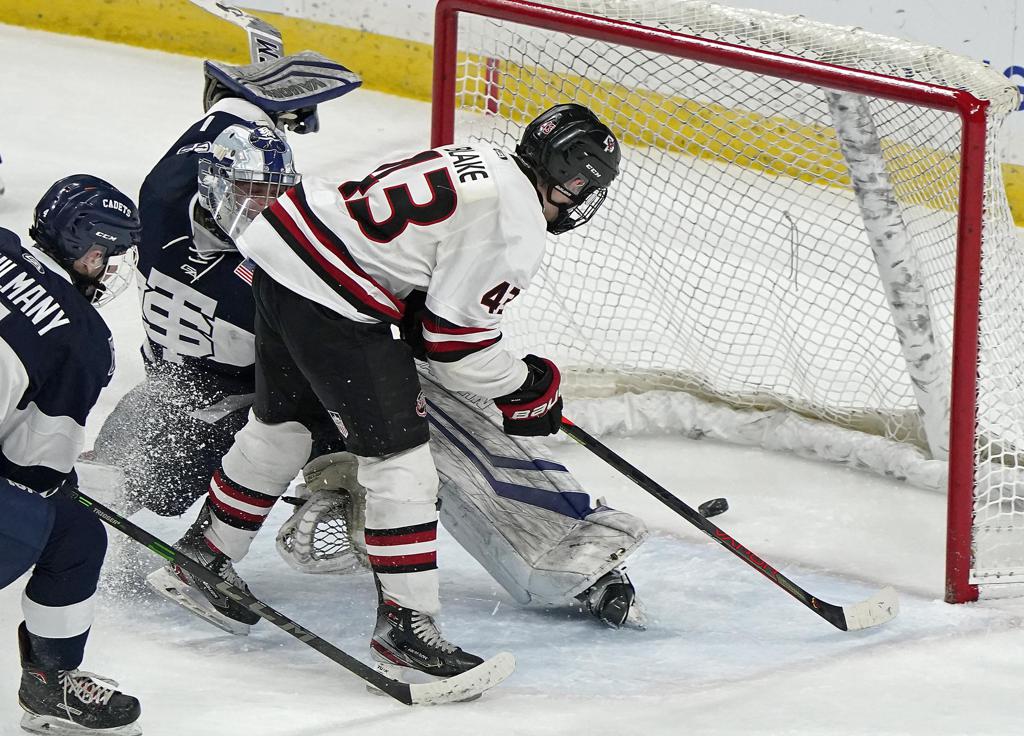 Carter Batchelder’s game was heading from bad to worse. Trouble controlling the puck escalated into difficulty maintaining his edges.

Those two fundamentals aside, it was no small matter that through two periods Wednesday of the Class 2A tournament quarterfinal against St. Thomas Academy that Batchelder and heralded Eden Prairie linemates Drew Holt and Jackson Blake had accounted for all of one goal.

“That line had had so many chances in the first period and didn’t score,” Eden Prairie coach Lee Smith said after the No. 1-seeded Eagles, runners-up the past two seasons, defeated the unseeded Cadets 6-2 at Xcel Energy Center. “And in the second period STA defended them a lot better.

“I told them going into the third, ‘You are going to have to finish, or our season is over.’ ”

“There was obviously a lot of pressure on us,” Batchelder said. “But we know it’s a whole team effort.”

Batchelder kickstarted a five-goal flurry of third-period Eden Prairie goals by scoring off his own rebound with 3:27 gone to put the Eagles (19-1-2) ahead 2-1. Riku Brown scored 73 seconds later.

“When they go up two there a little bit of air goes out of the balloon,” St. Thomas Academy coach Trent Eigner said.

Blake’s breakaway goal made it 4-1 with 7:32 left and all sealed the outcome.

Batchelder added an empty-net goal with 3:19 left, boosting his season goal total to a team-best 30 and relegating his rocky start to nothing more than a footnote.

“For a while there I couldn’t find the puck,” he said. “But my teammates kept it positive and we pushed through.”

Carter Batchelder and Riku Brown scored third-period goals 73 seconds apart to break open a tie game and propel No. 1 seed Eden Prairie to a 6-2 victory over unseeded St. Thomas Academy on Wednesday in a  Class 2A quarterfinal at Xcel Energy Center.

Batchelder, the Eagles’ scoring leader with 30 goals, provided an energy boost — and a 2-1 lead — when he slammed home the rebound of his initial shot that sailed high into the air after deflecting off Cadets goaltender Carsten Lardy’s blocker.

Brown scored just more than a minute later, putting the Eagles ahead 3-1 with 12:20 left.

Jackson Blake added a highlight-reel goal — chipping the puck past a Cadets defender at the blue line and freezing Lardy with a deke — to make it 4-1 with 7:32 left.

St. Thomas Academy’s Tanner Brouwer scored with 4:49 left and Lardy pulled in favor of an extra skater to make it 4-2. Eagles defenseman Kam Langefels scored to make it 5-2 with 3:51 left and Batchelder added an empty-net goal with 3:19 left.

The victory extended the Eagles’ state tournament quarterfinal winning streak to nine games dating to 2003. Eden Prairie has lost in the championship game each of the past two years.

St. Thomas Academy was unable to rekindle magic it used a year ago in the quarterfinals when it was unseeded and stunned No. 1 seed Andover 3-2.

Eden Prairie senior Drew Holt opened the scoring on a first-period power play. A shot from the point by defenseman Luke Mittelstadt appeared to deflect off Holt’s chest and drop straight to his feet. Holt wasted little time in slamming the puck into an open net for his 19th goal of the season.

Eden Prairie outshot St. Thomas Academy 8-3 in the first period, in part because of the pressure applied during the Eagles’ three power-play opportunities. The Cadets went 0-for-2 on their two power-play chances in the first.

The teams met twice previously this season, with Eden Prairie winning 3-2 on March 6 and 5-2 on March 11.