Andrew Mosley and Nick Sajevic scored 74 seconds apart, lifting the Stars to a 5-3 victory and their first 1A championship game. 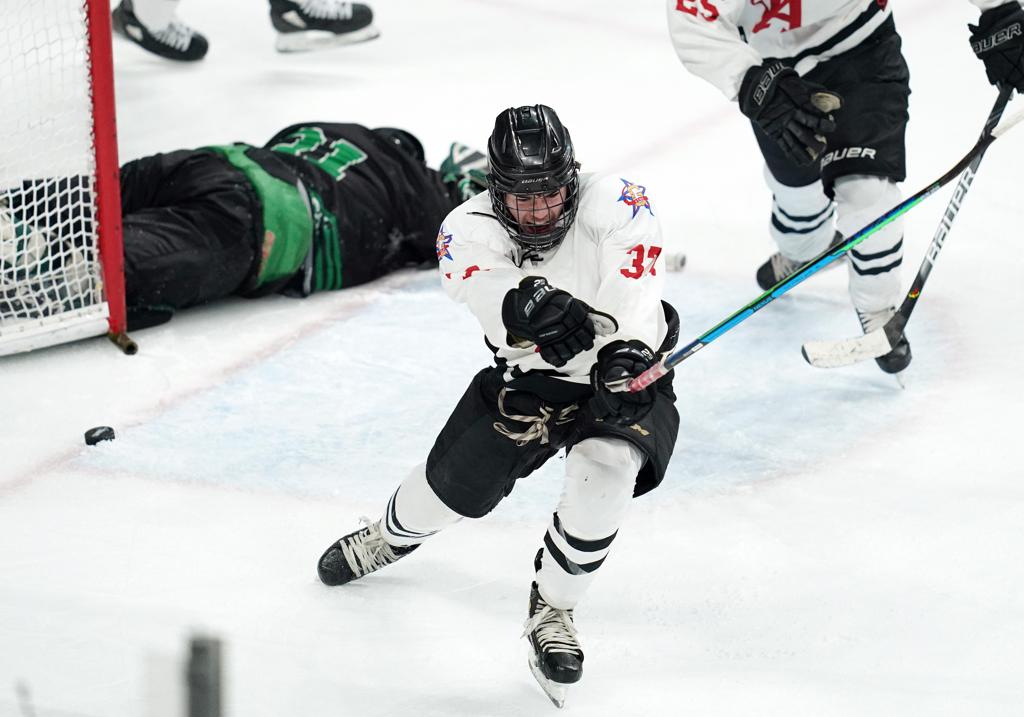 A little levity is never a bad thing. Especially for a team staring down adversity — and potentially a loss — for the first time.

Barrett Hall’s laughter-inducing attempt at a between-the-legs shot in the third period Friday just might have been the play of the game for Gentry Academy. The effort seemed to cut the tension on the Stars’ bench and free up the state’s only unbeaten, untied team to rally to defeat East Grand Forks what was by far its most competitive game of the season.

“I didn’t even mean to try to do that, the puck just hit off my back foot and I tried to get my stick on it,” Hall said about his trick-shot misfire after he scored twice in Gentry Academy’s 5-3 victory over East Grand Forks in a Class 1A semifinal at Xcel Energy Center.

No. 2 seed Gentry Academy (18-0-0) was trailing in the third period for the first time this season when Hall’s second goal of the game tied the score at 3-3. Then came the accidental try at the spectacular, a play that had teammates joking with him on the bench.

“It was getting pretty tense there, and I think that lightened the mood for us a little bit,” Hall said.

Gentry Academy, which trailed 2-0 and 3-1 against the third-seeded Green Wave, reshuffled its lines in the second period to combine top scorers Hall, Nick Sajevic and Damon Furuseth. The trio played every other shift as the Stars scored four unanswered goals, three of them in the third period.

“I asked them probably five or six times, ‘Are you guys good?’ ” Gentry Academy co-head coach Billy Hengen said of the unit’s stamina.

East Grand Forks (14-9-0) blunted the Stars’ speed in the neutral zone through two periods until Hall, Andrew Mosley and Sajevic scored in succession in the third. Gentry Academy’s closest game before Friday was a 7-3 section final triumph over Mahtomedi.

“They did what they had to do to win,” East Grand Forks coach Tyler Palmiscno said of the Stars’ lineup adjustments. “We just didn’t have a response.”

Andrew Mosley and Nick Sajevic scored 74 seconds apart in the third period to break open a tie game and catapult No. 2 seed Gentry Academy past No. 3 seed East Grand Forks 5-3 in a Class 1A semifinal at Xcel Energy Center.

Mosley’s goal came with 7 minutes, 48 seconds left after he took a centering pass and scored while crashing into East Grand Forks goaltender Cole Quirk and the right goalpost. The play was reviewed for possible offsides, but the goal stood and Gentry Academy (18-0) held its first lead at 4-3.

Sajevic made it 5-3 with 6:34 left when he one-timed a Damon Furuseth pass past Quirk, who was playing without his goalie stick. The goal was Sajevic’s team-best 24th of the season.

Gentry Academy junior Barrett Hall’s second goal of the game tied the score at 3-3 just 44 seconds into the third period. His shorthanded goal came after he beat an East Grand Forks defender to the puck in the corner, then outmaneuvered two more Green Wave players on his way to the front of the net. Hall finished the play by wrapping the puck past the outstretched pad of Quirk, putting the puck just inside the left post.

East Grand Forks (14-9-0) put Gentry Academy in an unfamiliar position early by taking a 1-0 first-period lead on sophomore Jaksen Panzer’s fourth goal of the tournament. Panzer faked a pass while racing through the high slot, then unloaded a quick shot that beat Stars goaltender Alex Timmons between his leg pads.

Gentry Academy had trailed in just three games previously this season for a total of 28:11. The Stars had never trailed by more than a goal and never beyond the 13:37 mark of the first period.

That changed when junior Trey Ausmus scored a power-play goal to give the Green Wave a 2-0 lead with 5:13 left in the first period. Ausmus took a high-slot feed from Landon Parker and shot the puck over Timmons' glove hand.

Timmons finished with 27 saves while Quirk had 22.

East Grand Forks was hoping to add to the back-to-back state Class 1A championships it won in 2014 and 2015.