Lamb scored season goals 49, 50 and 51 to send the Wildcats to the title game where they'll face No. 2 seed Gentry Academy. 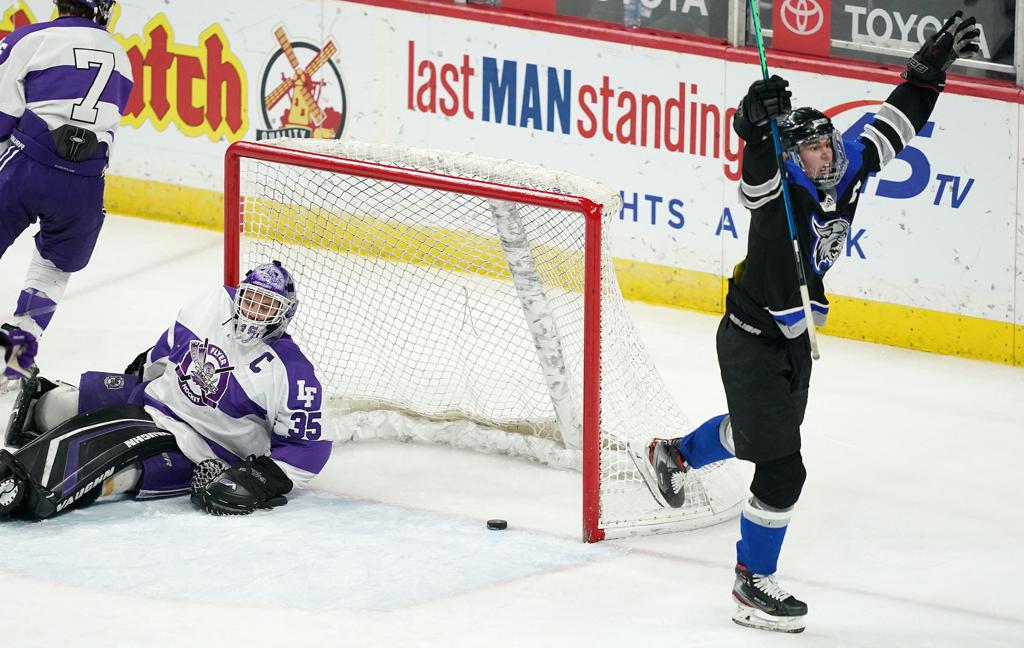 Talk about a magnificent seven.

Dodge County junior forward Brody Lamb, who wears No. 7 on his back, put his team there as well. He tallied a hat trick — his seventh this season — as the Wildcats defeated Little Falls 4-1 in a Class 1A tournament semifinal.

“I didn’t really think, honestly, that we would make it this far,” Lamb said. “But anything can happen. It’s going to be fun.”

Lamb’s repertoire brought enjoyment to anyone not supporting Little Falls. His first goal in particular showed why Lamb is committed to the Gophers. With a Little Falls defender closing the gap, Lamb released the puck. It hit the crossbar and deflected in — bar down in hockey parlance.

Asked whether the puck might have deflected off the Little Falls player’s stick, Lamb said, “That wasn’t stick.”

The goal came less than four minutes after Charlie Blaisdell tied the game in the second period. Lamb said the quick goals righted the team’s mixed bag of a first period.

“We had a good first 10 minutes and then our coach felt like the last seven minutes were a little lazier,” Lamb said. “Coach came in and chewed us out a little bit. And then each of the captains talked about working hard the whole game and getting the outcome we wanted.”

“Nothing they do can have an effect on us,” Flyers senior goalie Dane Couture said. “Attitude and effort are all you can control. You’ve got to pick it back up and keep working hard.”

Trailing 1-0 to Little Falls after the first period, Dodge County grabbed the lead thanks to a pair of goals.

A puck shot by defenseman Charlie Blaisdell glanced off goalie Dane Couture’s glove and the game was tied.

Lamb impressed with his snipe over Couture’s glove for a power-play goal and a 2-1 lead.

Lamb scored again in the third period, bumping the lead to 3-1.

But early in the third period, a would-be tying Little Falls goal was disallowed because officials whistled the play stopped moments before the puck was put home.

That incensed Little Falls (14-5-1) fans, who saw an apparent Flyers goal in the first period waved off after officials ruled goaltender interference.

No matter. Defenseman George Moore stayed hot in the playoff, staking the Flyers to a 1-0 lead on his third consecutive postseason goal.