Trailing 2-0, the Cougars scored late in the second period and added three more unanswered in the third en route to the 2A championship game. 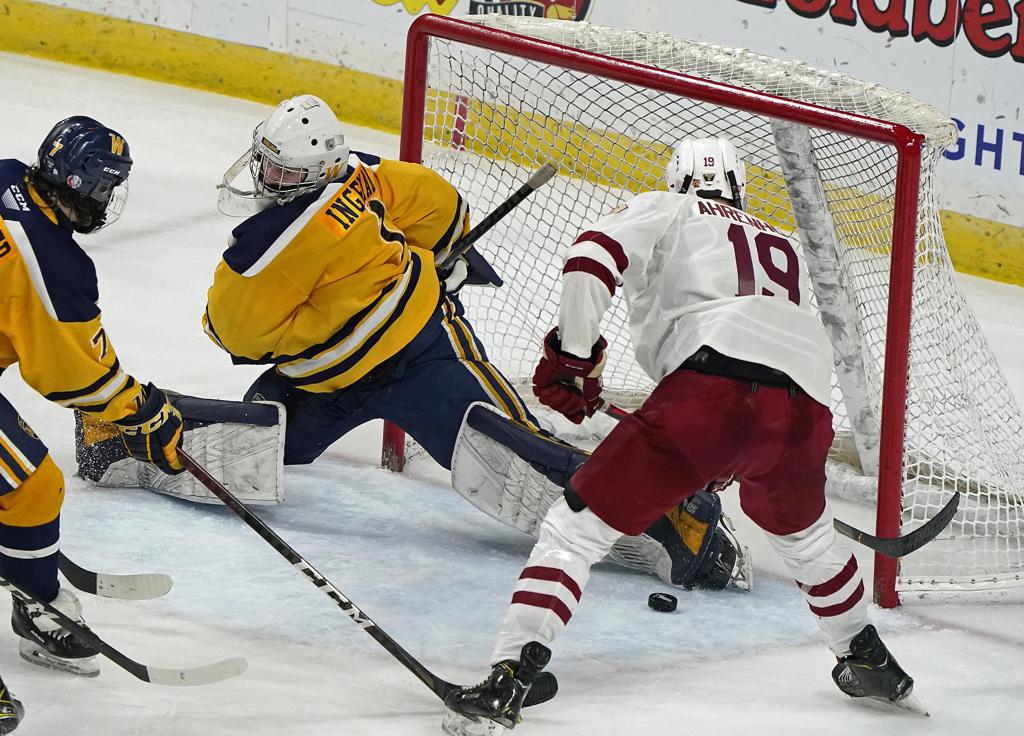 For a good 10 seconds Friday, Cade Ahrenholz stopped playing hockey and instead tried his hand at whack-a-mole.

Ahrenholz finally smacked the puck on that third try, only to have Wayzata goaltender Will Ingemann stretch his left leg in front of the shot. But the rebound popped straight back to Ahrenholz, who with one more mighty swipe lifted the puck into an open net.

The goal ignited the No. 3-seeded Cougars and their previously dormant top line to a four-goal third period explosion. The outburst triggerd a 5-3 come-from-behind triumph over unseeded Wayzata (14-6-2) on Friday in a Class 2A semifinal at Xcel Energy Center.

“I did take a couple of whacks at it, before I finally got it over the goalie,” Ahrenholz said. “Once that one went in you saw our bench, it erupted. We knew that was our game to win.”

Ahrenholz’s gritty goal that tied it at 2-2 was followed by something much more pretty about five minutes later, as he whipped a shot from the high slot off the left goalpost. That gave Lakeville South (20-0-2) a 3-2 lead with 5:16 left.

“The first one was a perfect example of what he does — big strong guy good at hunting pucks down,”

akeville South coach Janne Kivihalme said of Ahrenholz, a 6-3, 210-pound senior who has committed to Colorado College. “On the second … I don’t think people give him a whole lot of credit on his shot, but it is very good.”

Cam Boche, another member of the Cougars’ dominant top line, scored to make it 4-2 less than a minute after Ahrenholz’s second goal.

“There was a stretch there in the third that we kind of got away from our game and looked a little timid, and they took advantage of that,” Wayzata coach Pat O’Leary said.

Senior forward Cade Ahrenholz scored twice in the third period as No. 3 seed Lakeville South rallied to defeat unseeded Wayzata 5-3 in a Class 2A semifinal Friday at Xcel Energy Center in St. Paul.

Lakeville South is trying to become the first undefeated state champion since Lakeville North went 31-0 in 2015.

On his first goal, Ahrenholz, who has committed to Colorado College, took three whacks at a loose puck in the crease before finally connecting with it, only to have Wayzata goaltender Will Ingemann block the shot with his left leg pad. Ahrenholz, on try No. 4, then popped the puck high over Ingemann.

Wayzata pulled Ingemann in favor of an extra skater in the closing minutes, and Dylan Lewis’ second goal of the game pulled the Trojans to within 4-3 with 1:21 left.

Near the end of the second period the Trojans (14-6-2) appeared to be headed to the locker room with a 2-0 lead after an errant breakout pass by the Cougars led to a goal by Lewis with 1:42 left. Lewis was alone in front of the the Lakeville South goal when the puck deflected to him. He had plenty of time to find an opening past Cougars goaltender Cody Ticen’s blocking glove.

But with 8.7 seconds left in the period, sophomore Ashton Dahms energized Lakeville South with a rebound goal to make it 2-1.

Lakeville South’s top line of seniors Boche and Ahrenholz and sophomore Tanner Ludtke had a flurry of chances late in the second, with Ingemann stopping a point-blank try by Ludtke and a close-range shot by Ahrenholz.

The play was mostly even for the rest of the first, as indicated by Wayzata’s 11-10 advantage in shots on goal.

Ingemann finished with 28 saves while Ticen had 25.