The back-and-forth game featured a wild third period with the teams scoring four goals in 99 seconds. 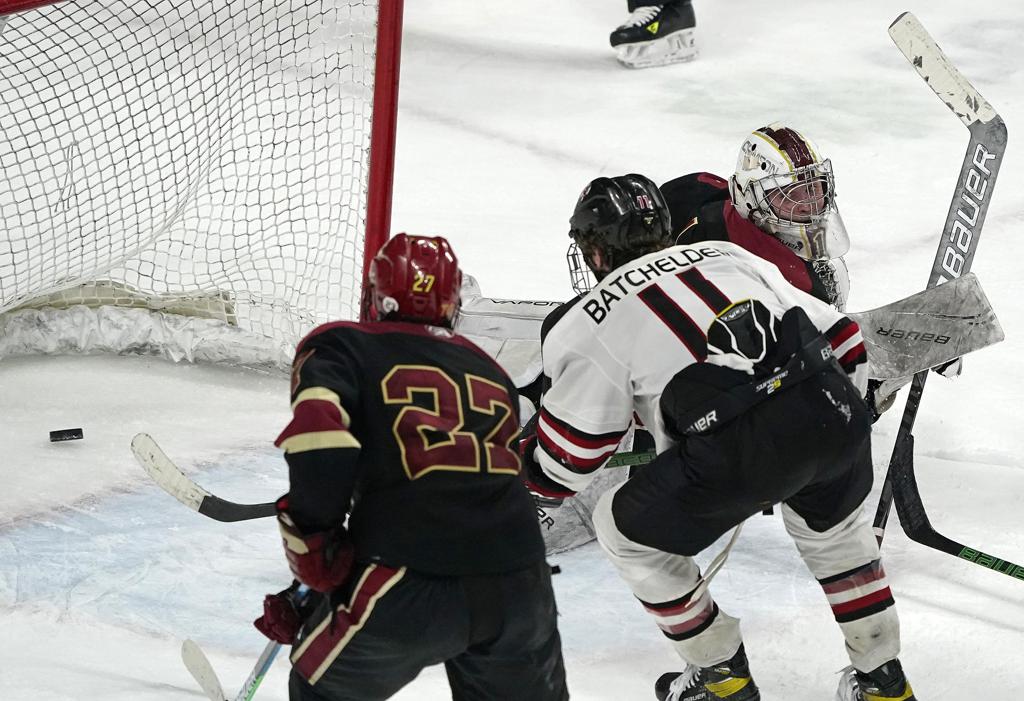 Robbed on a great pad save in the second period, Eden Prairie forward Carter Batchelder resolved to elevate both the puck and his level of play going forward.

Two Batchelder goals in a rapid-fire, back-and-forth third period and another with 1:02 left in overtime fueled the Eagles’ 6-5 victory against Maple Grove on Friday in the last Class 2A state tournament semifinal.

No. 1 seed Eden Prairie (20-1-2) advances to face unbeaten Lakeville South at 8 p.m. Saturday at Xcel Energy Center. The pinnacle game will have a tough act to follow.

“This game had it all,” Eagles coach Lee Smith said.

Physical play. Great goaltending. Goals scored on skill and will. The teams shared a mutual respect, but also were not content to be judged by rankings. One or the other could be found atop the Let’s Play Hockey coaches poll much of the season. And each hoped for a state tournament meeting to provide their true measure of greatness.

The teams traded power-play goals through the first two periods. Then 5-on-5 production took hold for the remainder. Three goals in 21 seconds — two from No. 4 seed Maple Grove (21-2) and the other from Eden Prairie — forced overtime.

Batchelder believed in his guys.

“We know what it takes,” he said. “We knew we had to bear down and keep pushing.”

Eden Prairie didn’t get the early overtime breaks. Kam Langefels hit the post. Later, Maple Grove got loose for a 3-on-1 chance. But the Crimson couldn’t muster a shot on goal.

“I’ve seen them make that play 1,000 times,” Maple Grove coach Todd Bergland said. “But this time, their defenseman made the play.”

Maple Grove was out of chances. Batchelder got free in the slot for a Drew Holt pass and capped his special game.

Saturday night will require the Eagles, who have lost the past two championship games, to once again elevate their play.

Eden Prairie’s Carter Batchelder scored with 1:02 left iin overtime to complete a hat trick and a 6-5 victory to put the Eagles into the Class 2A state championship game.

They face unbeaten Lakeville South at 8 p.m. Saturday at Xcel Energy Center. No. 1 seed Eden Prairie (20-1-2) has lost the past two championship games.

Three goals in a 21-second span of the third period tied the game 5-5 late in regulation on Friday.

Before that flurry, Maple Grove scored just 25 seconds into the third period with a goal off Chris Kernan’s skate for a 3-2 lead.

Batchelder made the task of getting the equalizer his personal mission, making an all-or-nothing streak toward the Crimson goal and putting the puck past goaltender Jack Wieneke at 4:15 on sheer will.

Great passing and a better shot then put the Eagles ahead 4-3. A give-and-go with Jackson Blake freed Batcheler for a shot he put away at 11:32.

Kernan matched the effort, blasting a pass from Sam Jacobs past goalie Zach Hayes for No. 4 seed Maple Grove (21-2) to tie the game at 4-4.

Unfazed, Eden Prairie jumped ahead once again, this time on a sharp-angle goal by Drew Holt. The puck hit  Wieneke’s stick blade and bounced by him with four minutes left.

Plenty of time left, as it turned out. A Maple Grove rush nine seconds later ended with an Ian Barbour goal at a 5-5 tie.

The blur of 5-on-5 production contrasted the first two periods, when the teams traded power-play goals.

Mason Langenbrunner moved Eden Prairie ahead 2-1 in the second period. Then Maple Grove’s Jacobs evened the score on his second power-play goal of the game.

A high-tempo first period featured the best in each teams’ skilled skaters and solid goaltenders. Power-play goals for each team produced a 1-1 stalemate after 17 minutes.

Forechecking behind the Eden Prairie net, Landen Gunderson turned to find Jacobs in the slot. Jacobs scored his 30th goal of the season for the early Maple Grove lead.

Eden Prairie flashed its own man-advantage acumen. Luke Mittelstadt left a drop pass for Blake, who raced down the right side of the zone and slid a puck past goaltender Wieneke and inside the far post to draw even. Blake notched his 20th goal.