The Stars, based in Vadnais Heights, got goals from eight players in throttling unseeded Dodge County en route to an 8-1 victory. 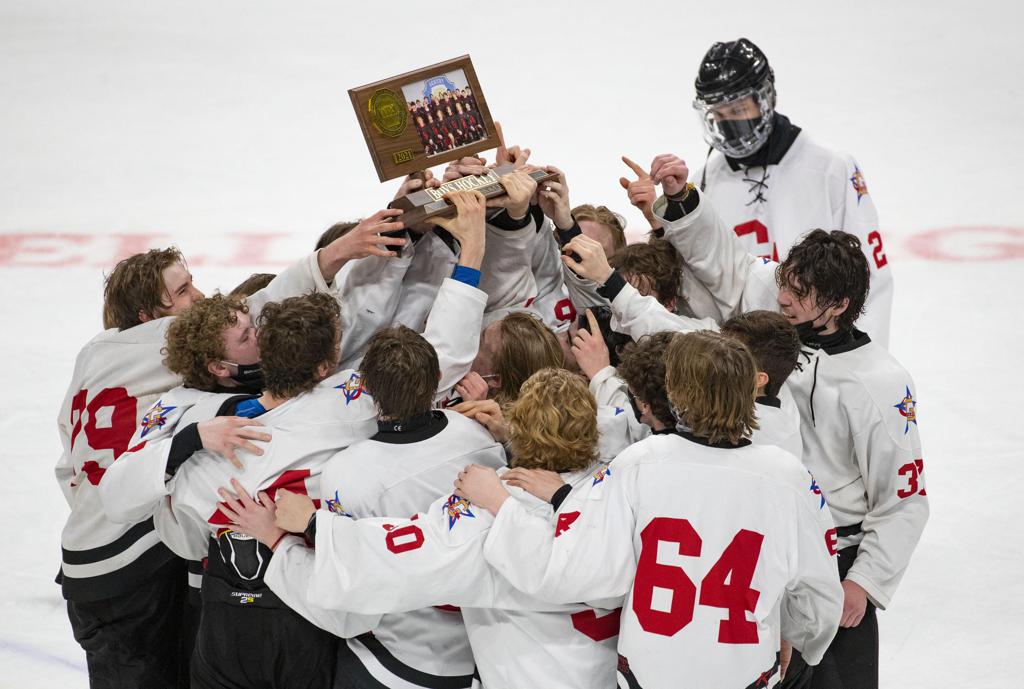 It was the matchup of the superstar vs. the superteam, and the former never really had much of a chance.

With the the puck rarely leaving the Dodge County end, Wildcats phenom Brody Lamb was reduced to the role of the state’s highest scoring defender Saturday as No. 2 seed Gentry Academy roared to an 8-1 victory in the Class 1A championship game at Xcel Energy Center.

Gentry Academy (19-0), a team that never dumps the puck, rarely ices it and seemingly makes only tape-to-tape passes, didn’t need to deploy an exotic defense against Lamb. The junior entered the title game with nine tournament goals among his state-leading 51. Through two periods he rarely touched the puck, much less gathered it in scoring position.

“That was probably the toughest game of our season,” said Lamb, who has verbally committed to Minnesota. “They are so skilled and fast, and they made quick, smart plays.”

While eight players were scoring for Vadnais Heights-based Gentry Academy, Stars defender Zach Reim was tasked with the shutdown role on Lamb.

“We respected him,” Gentry Academy co-head coach Billy Hengen said of Lamb. “We told our forwards to get body on him. We don’t normally do that, but with the tournament he was having and what we saw on film … he’s a real special talent.”

Lamb’s goal 2:21 into the third period energized unseeded Dodge County (19-4-1), but only momentarily. Gentry Academy answered with two goals in the next four minutes as part of its four-goal game-ending surge.

“We knew we had the firepower to do it,” Stars junior forward Barrett Hall said as he celebrated the championship. “I think my heart rate is higher now than it was during the game.”

Gentry Academy buttressed its high school team this season with several members of its nationally dominant 16U AAA squad from last year. The Stars’ depth, speed and passing all season conjured visions of Edina’s fabled 1982 championship squad, a “superteam” that was a merger of the town’s powerful East and West high school programs.

“It feels great,” Stars senior defensemen Andrew Mosley said. “It’s what you dream about starting as a little kid.”

1. Damon Furuseth, Gentry Academy, senior forward: Had a hand in each of the Stars’ first three goals, scoring the first and assisting on the next two. He and longtime sidekick Barrett Hall also executed numerous quality give-and-gos.

2. Isaac Dale, Dodge County, junior goaltender: He made numerous sensational stops, keeping the score from being more lopsided. Gentry Academy had 35 shots entering the third period, and Dale, exhausted by the end, made 46 stops.

3. Isaiah Norlin, Gentry Academy, senior defenseman: Led a group not typically known for shutdown abilities in slowing Dodge County’s Brody Lamb for much of the night. Norlin also contributed a goal and an assist.

QUOTE
“It was cool that eight guys scored. That’s symbolic of our whole season. I have never been part of a deeper high school team or youth team than this.” — Gentry Academy co-head coach Billy Hengen

Senior forward Damon Furuseth had a goal and three assists and Gentry Academy held Dodge County scoring superstar Brody Lamb to a single goal as the No. 2-seeded Stars eased to an 8-1 victory to win the Class 1A championship at Xcel Energy Center.

Gentry Academy, based in Vadnais Heights, also became the first Class 1A team to win a state title in its first tournament appearance since Benilde-St. Margaret’s in 1999. Unseeded Dodge County (19-4-1) also was making its first trip to the state tournament.

Lamb was bottled up at every turn until the third period Saturday when he scored  2:21 into the final period to make it 4-1. The goal was Lamb’s 10th of the tournament and 52nd of the season.

Gentry Academy regained the momentum quickly, getting goals from Isaiah Norlin and Brevan Grigus to make it 6-1.

Stars senior Nick Sajevic added a goal with 4:49 left to make the score 7-1 and put the game into running time (six-goal lead or more in the third period). The goal was Sajevic’s fourth of the tournament. Reese Shaw also scored late in the third for Gentry Academy.

Gentry Academy took control with a three-goal second period. Wes Berg, Barrett Hall and Bailey McGraw scored during a span of 7:03 to give the Stars a 4-0 lead. Hall’s goal came on the power play, Gentry’ Academy’s second on the man-advantage.

Furuseth scored the only goal of the first period on a power play at 5:02. His shot from the high slot beat a screened Dodge County goaltender Isaac Dale. The goal was Furuseth’s 16th of the season and fourth of the tournament.

Dale, a junior, was pelted with pucks from all angles and trajectories in the first period, when Gentry Academy outshot Dodge County 23-4. He made repeated stops on one-time blasts from Stars sharpshooter Nick Sajevic, among his many spectacular saves.

The Stars won 15 of their games by six or more goals, shut out seven opponents and scored 10 or more goals six times.

Gentry Academy, a charter school with an enrollment of about 100 high school-age students, has opted up to play at the Class 2A level next season.