Friday at the X: More fans, more noise and a goal-scorer with wheels

Notes and tidbits from the 2A state tournament, including the day's three stars and an update on two prized collector's items. 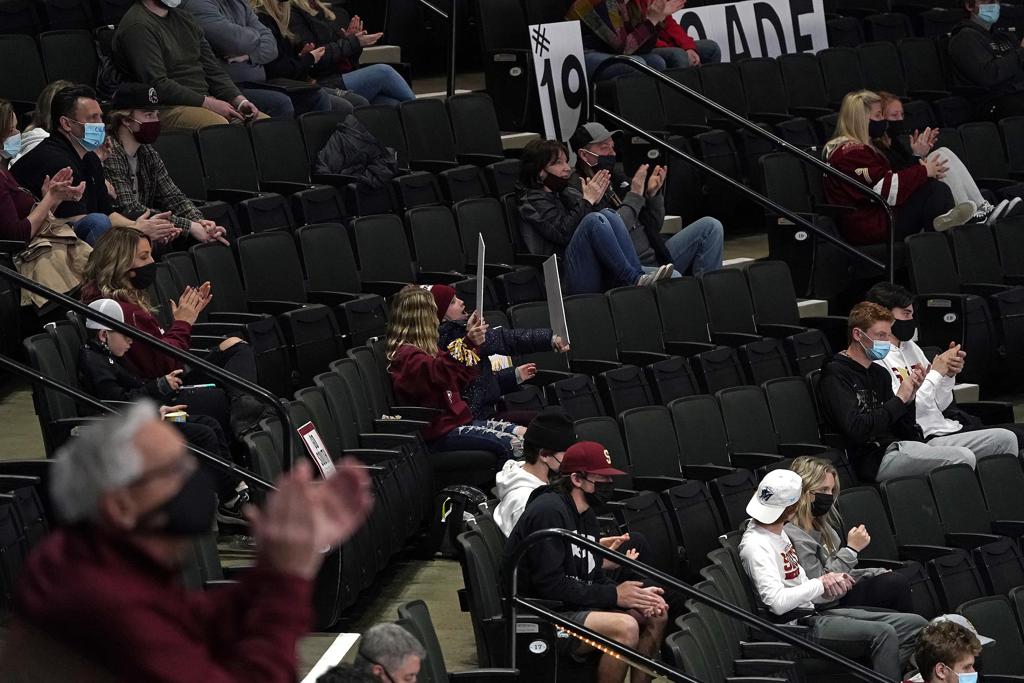 There are times when Barrett Hall just wants to hop on his bike and ride. Sixty miles or more.

Hall, a Gentry Academy junior forward, was ranked as the No. 1 mountain biker in the nation in his age group before COVID-19 shut down most competitions last year. He rides about 10 hours a week during the hockey season and double that in the offseason.

“With all the training he does, his endurance is off the charts,” Gentry Academy co-head coach Billy Hengen said.

Despite playing every other shift starting in the second period Friday against East Grand Forks, Hall seemed to get better as the game wore on, ending in a 5-3 Stars victory. He scored 44 seconds into the third period (his second of the game) and banked a shot off the right post seconds later. Then he just missed connecting on a between-the-legs trick shot from close range.

“His stamina is very noticeable out there,” Gentry Academy senior Nick Sajevic said. “Give him the puck and he just keeps on working,”

Hall’s two goals give him 22 this season, two behind Sajevic’s team-best 24.

“I thought that was awesome and our crowd was great,” Dodge County junior forward Brody Lamb said. “Definitely louder than last time because there were a lot more people in the building. It pumped us up.”

The quarterfinal games were capped at 250 fans per session by Xcel Energy Center on recommendation of the Minnesota Department of Health. Restrictions were eased starting April 1 and 2,300 fans were allowed per session.

Tickets unused by participating schools were made available to season-ticket holders and the general public.

The shirts, created in 1990, feature cartoon rats sporting the jerseys of all eight qualifying teams. Distributor Mark Hultgren said the shirts can be ordered online at https://2021mnrats.itemorder.com and will be shipped in mid-April.

The future is uncertain for Fogarty, painter of memorable tournament program covers for more than two decades. The Minnesota State High School League’s digital programs this school year has Fogarty “thinking it’s a change of the guard.”

“I haven’t talked to anyone at the league since the last hockey tournament,” Fogarty said. “I don’t know their plans. I feel like I’m watching Henry Ford’s Model T going down the street while I’m standing in my buggy shop.”

THREE STARS
1. Brody Lamb, Dodge County, junior forward: His semifinal hat trick gives him a state-best 51 goals this season. His first goal was a snipe of the highest order, going bar down to give his team a 2-1 lead.

3. Barrett Hall, Gentry Academy, junior forward: Wind him up and watch him go. Hall’s nonstop motor propelled him to a two-goal performance that included a plethora of top-grade scoring chances.

BY THE NUMBERS
1
Undefeated, untied team that has won a state Class 1A championship. Johnny Pohl-led Red Wing went 28-0 in 1997. Gentry Academy takes an 18-0 record into Saturday’s 1A championship game.

28
Seasons in the career of Little Falls coach Tony Couture. He coached his final game Friday after building the Flyers’ program, winning 426 games and making seven state tournament appearances. “It’s pretty emotional because I got to have him on the ice with me every day,” said Couture’s son Dane, a fellow goaltender. “I want to thank him for everything he’s done for me.”

99
Seconds it took Eden Prairie and Maple Grove to score four goals — two per team — late in the third period.

QUOTE
“We haven’t started the way we wanted to, there were some nerves in the first game and tonight. Start fast, that’s something we need to do [Saturday] night.” — Lakeville South’s Cade Ahrenholz on overcoming late one-goal deficits in the team’s two tournament games