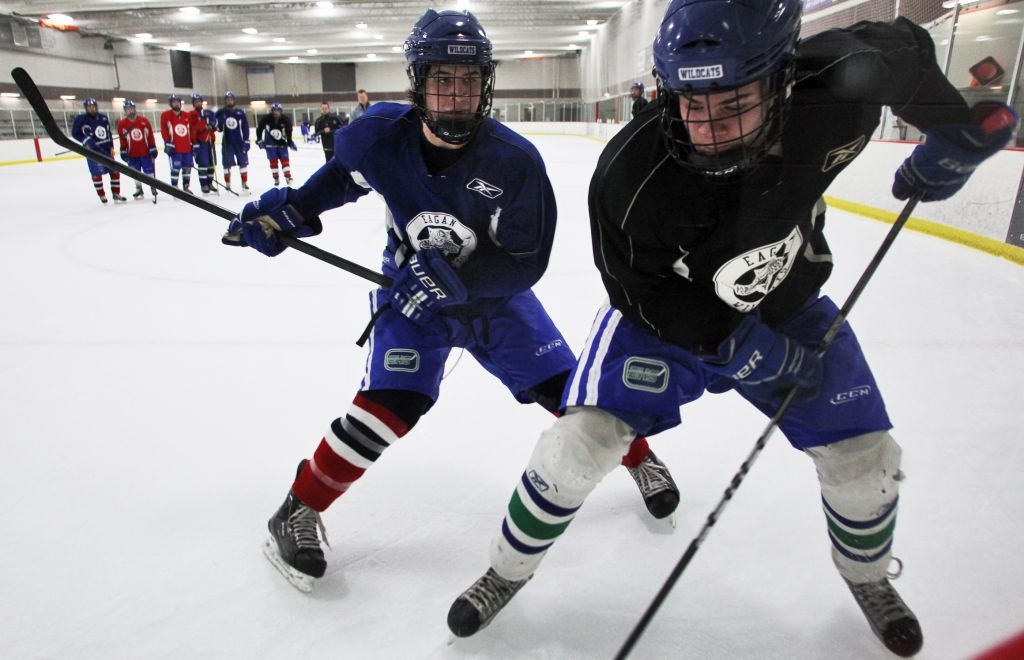 Eagan forward Michael Zajac, left, played the puck into the boards during a recent practice.. Zajac was one of the team's top scorers last season.

Whether he likes it or not -- or has seen it or not -- puck heads around Minnesota have tabbed coach Mike Taylor's boys' hockey team at Eagan as one of the best to begin the season.

"In our dressing room we call rankings white noise," Taylor said. "It's just something in the background; it means absolutely nothing. If we spend any time looking at any of the white noise, it's time we're cheating ourselves out of development. That message has been loud and clear."

So has the white noise.

It's not tough to spot out why the Wildcats are receiving so much hype -- including a top ranking in Class 2A by the Star Tribune and the No. 2 spot by Let's Play Hockey magazine behind Duluth East.

Eagan finished third in Class 2A last winter, losing to eventual state champion Eden Prairie in the semifinals before rebounding with a victory over Edina.

From that squad, the top five scorers are all back, each with at least 27 points during the regular season.

Forwards Michael Zajac (51 points) and Will Merchant (48) top that list. The Wildcats also return their top four defensemen from a year ago.

About the only question mark is at goaltender, but Taylor sounded confident in using either senior Christian Butler or freshman Andrew Lindgren, who has split time in scrimmages.

"This is a very hard-working, competitive group," Taylor said. "You put that along with their talent, and [that] is a great combination for anyone. But, you know, you're always looking to get better. I like some things we're doing very well and others we need to work on. You're always kind of picky as a coach, but we have a ways to go."

Taylor cites the obvious when asked about his caution. Eagan has yet to drop the puck on an official game; that won't come until a home game with Hastings on Thursday before a rematch with Eden Prairie on Saturday.

"Our guys are ready to play," Taylor said.

The rest of the South metro is hardly barren. Gophers recruit Justin Kloos returns to Lakeville South for his senior season after putting up 90 points as a junior and 50 points in this fall's 24-game Upper Midwest High School Elite League. Alex Harvey (70 points) is in the mix as well. The Cougars are ranked No. 14 in the Class 2A Let's Play Hockey poll, three spots behind defending South Suburban Conference champions Burnsville. The Blaze, with talented sophomores Tyler Sheehy and Teemu Kivihalme will be tested early; Burnsville opens play Thursday at No. 4 Minnetonka and follows that up with home games against No. 7 Hill-Murray and No. 3 Benilde-St. Margaret's.