The Greyhounds alum, with 30 years of experience as a player, coach and hockey volunteer, replaces Mike Randolph, who resigned earlier this year after leading the program for 32 years. 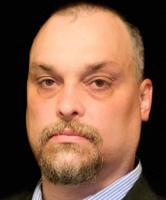 Steve Pitoscia, a Duluth East alum with 30 years of hockey playing, coaching and volunteering experience, has been hired as head coach of the school's boys' hockey program.

Pitoscia, who played hockey for Duluth East High School and in the USA junior program, replaces Mike Randolph, who resigned June 2 amid a school district investigation after leading the team for 32 years. In a news conference two days later, Randolph lamented that coaches were being forced out by parental pressure.

“Being a part of the East Hockey Program has always meant a great deal to me,” Pitoscia said in a  statement released Monday. “I am excited and incredibly grateful for the opportunity to lead it.  I look forward to working hard at maintaining the high standard that Coach Randolph has set for the program over the last three decades.”

Shawn Roed, Duluth East activity director, said in the same statement, “Coach Pitoscia has an exceptional track record of success at many different levels of hockey and that combined with his passion make him an ideal person to lead the program into the future.”