Vote in the poll and post comments on the matchup. 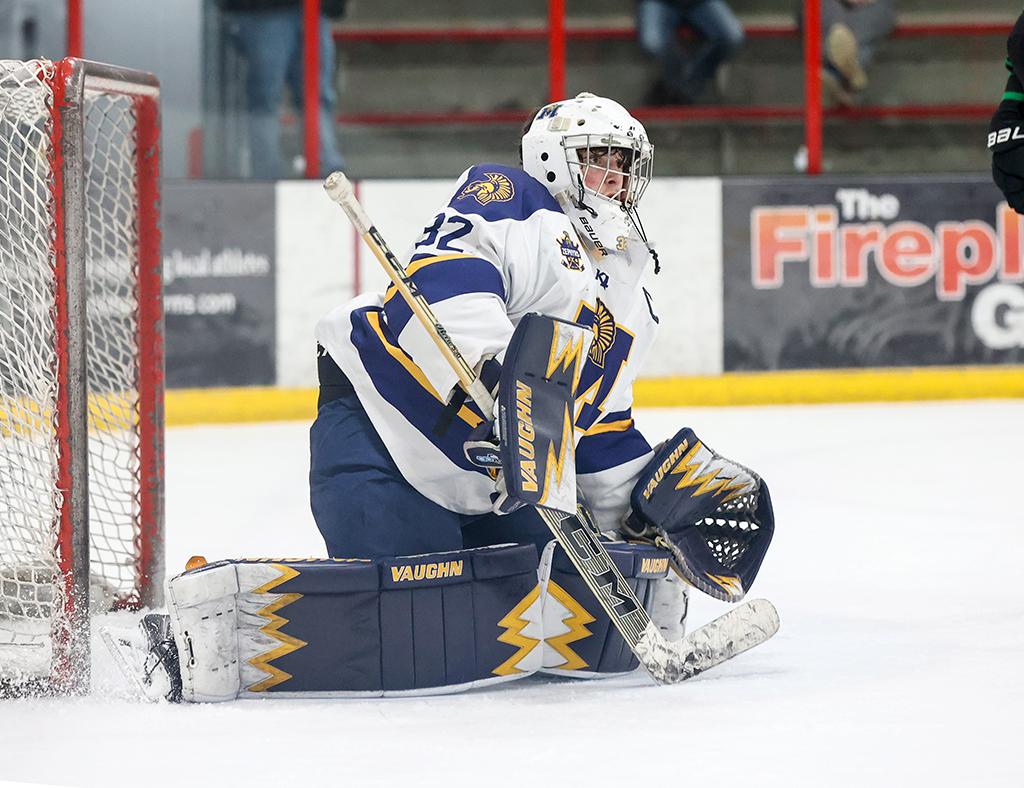 Mahtomedhi goaltender Ben Dardis tallied a 40 save shut out in a 5-0 win over East Grand Forks on Friday night at the St. Croix Valley Recreation Center. Photo by Cheryl A. Myers, SportsEngine 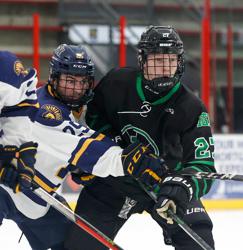 An elite goaltender can deliver a calming effect for any team.

Battered, tested and attacked from the onset, Mahtomedi’s Ben Dardis weathered the proverbial storm early until the offense came to life in front of him. By the end of three periods, the Zephyrs worked their way to a most unusual 5-0 shutout over visiting East Grand Forks in which Mahtomedi was outshot by a nearly two-to-one ratio (40-19) Friday night at the St. Croix Valley Rec Center.

Sometimes, that’s just how good teams find ways to win games. Back on its heels early and often, Dardis’ 40 saves proved to be the safety net third-ranked Mahtomedi needed to survive East Grand Forks, ranked No. 5 in Class 1A in this week’s Let’s Play Hockey coaches’ poll and end the week on a high note.

“The score is not indicative of the game at all,” Mahtomedi coach Jeff Poeschel says. “It really comes down to our goaltending was able to stem the tide before we could put a few pucks in the net. We were just fortunate to have the best goalie in the state.”

Featured on every watch or preseason all-state list, the four-year starter proved masterful against the Green Wave (1-2) as he worked his way through screens and masterfully controlled rebounds to quell the steady pressure that continually attacked the net.

Keeping a lid on that proved paramount.

“That first line is a good group, and I wanted to know where (Panzer) was at all times,” Dardis says. “He had his chances because he is a very good player, but we were able to shut him down tonight.”

Dominated in the first period, Mahtomedi came to life in the second period, and with three goals it steered the course of the game into another direction.

David Wolsfeld scored the first of his two goals on the night a little more than two minutes into the second period, and 58 seconds later the Zephyrs (3-1) added another when Brent Gulenchyn scored.

“They had a lot of pressure and zone time, but we kept scoring and that kind of took the wind out of their sails,” Dardis says.

With the momentum changing, Carter Haycraft added a short-handed goal later in the period, and it further worked to frustrate East Grand Forks (1-2) despite the Green Wave’s marked advantage in shots, zone time and puck possession.

“This was a weird game,” Dardi added. “We battled hard, but we weren’t super sharp tonight. It was a slow start but we were fortunate to get some lucky bounces, I made some saves, and we were able to come out on top.”

Improving his season record to 3-1 with a 1.00 goals against average and .970 save percentage, Dardis will likely be the focal point for every opponent on the Zephyrs’ schedule this year. With the top five scorers from last year’s team departed, an even bigger load is there for Dardis to shoulder.

That kind of pressure is something Poeschel and the rest of the Mathomedi staff are trying to downplay.

“I don’t think there is any question about that,” Poeschel said. “We don’t want him or anyone to feel like they need to do anything more than they need to do. He does his job and he does it very well. He gives his team a chance to win every night, and it’s hard to ask a goalie to do much more than stop the puck and be stingy … make them work for everything.

“I’ve cautioned him about taking on that added responsibility, to feel like he has to do it all or he needs to stop everything,” he added. “Because that can go south in a hurry and start to snowball. Ben just needs to do his job, continue to do it well, and let his team step up.” 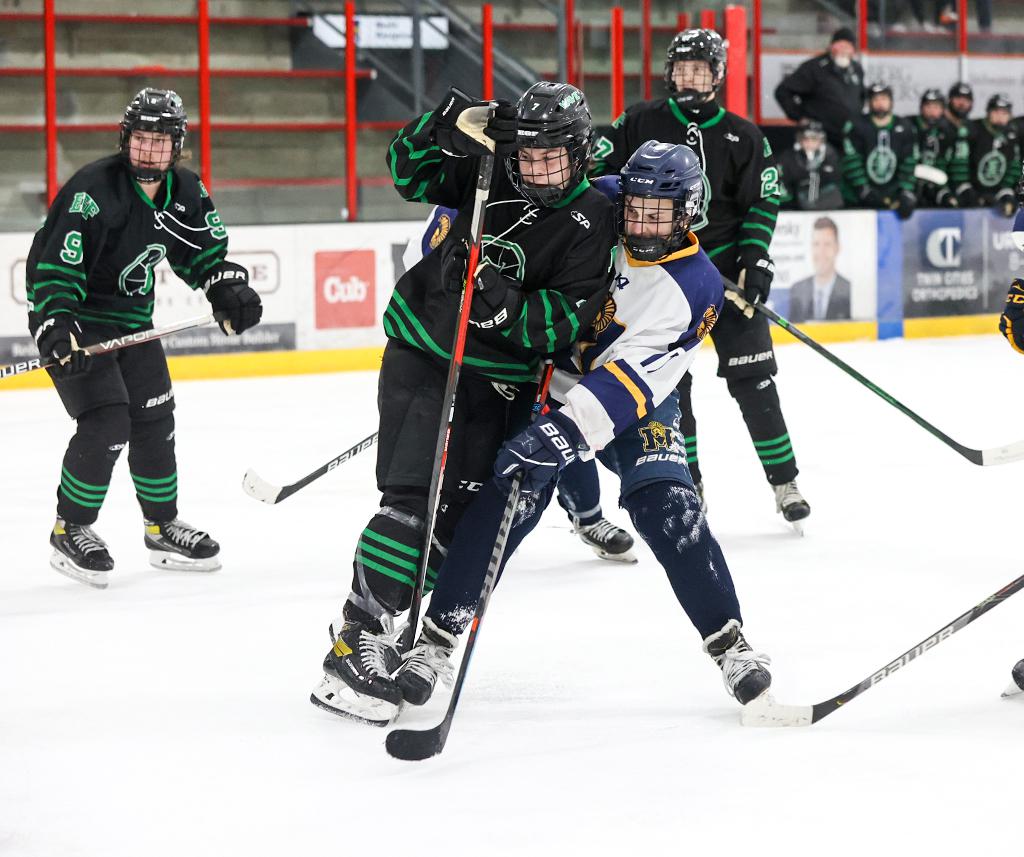 Mahtomedhi's Charlie Drage (11) tries to find space in front of the net. Drage tallied two assists in the Zephyrs' 5-0 win over the Green Wave. Photo by Cheryl A. Myers, SportsEngine 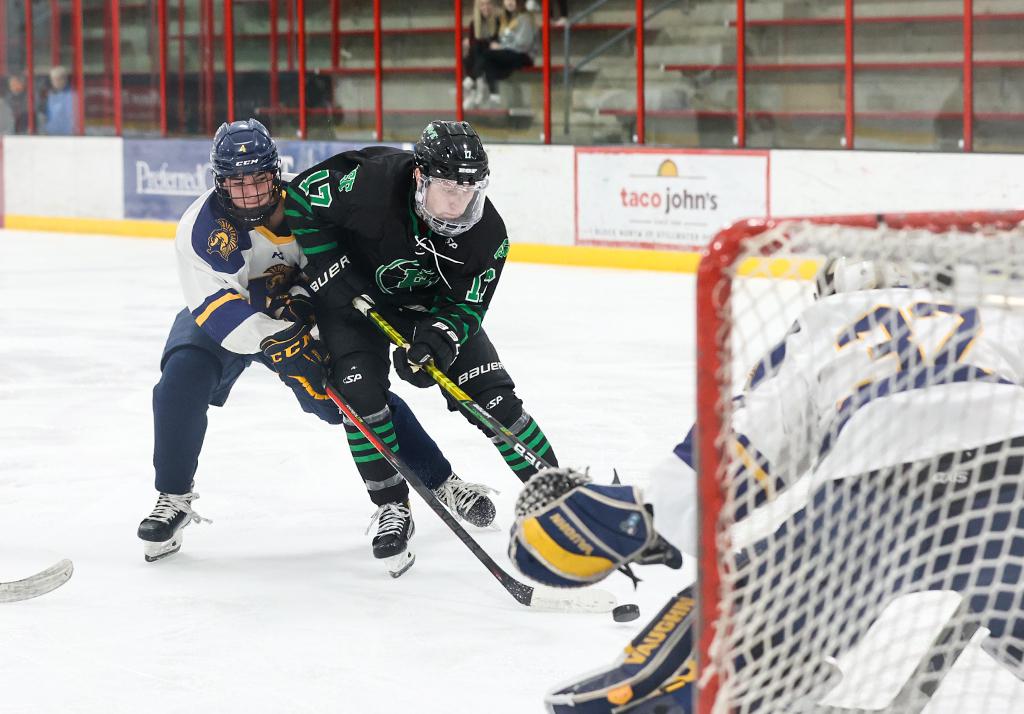 East Grand Forks' Jaksen Panzer (17) works his way through traffic at the front of the net and fires a shot into the leg pad of Ben Dardis in the second period. Photo by Cheryl A. Myers, SportsEngine

Outshot heavily from the onset, Dardis was the backbone as Mahtomedi weathered a tenuous opening period before the Zephyrs, ranked No. 3 in Class 1A according to this week’s Let’s Play Hockey coaches’ poll, came to life in the second period.

David Wolsfeld scored the first of his two goals on the night a little more than two minutes into the second period, and 58 seconds later the Zephyrs (3-1) added another when Brent Gulenchyn added a second to steer the direction of the game to an alternate course. Carter Haycraft added a short-handed goal later in the period, and it further worked to frustrate East Grand Forks (1-2) despite the advantage in shots, zone time and puck possession.

Wolsfeld notched his second goal of the game and fifth of the season midway through the third, and Grant Dardis scored late to ice the victory for Mahtomedi in a game the Zephyrs were outshot at a greater than two-to-one advantage (40-19).