A late goal from Fire in regulation pushed the Stars to get the victory finish in overtime. 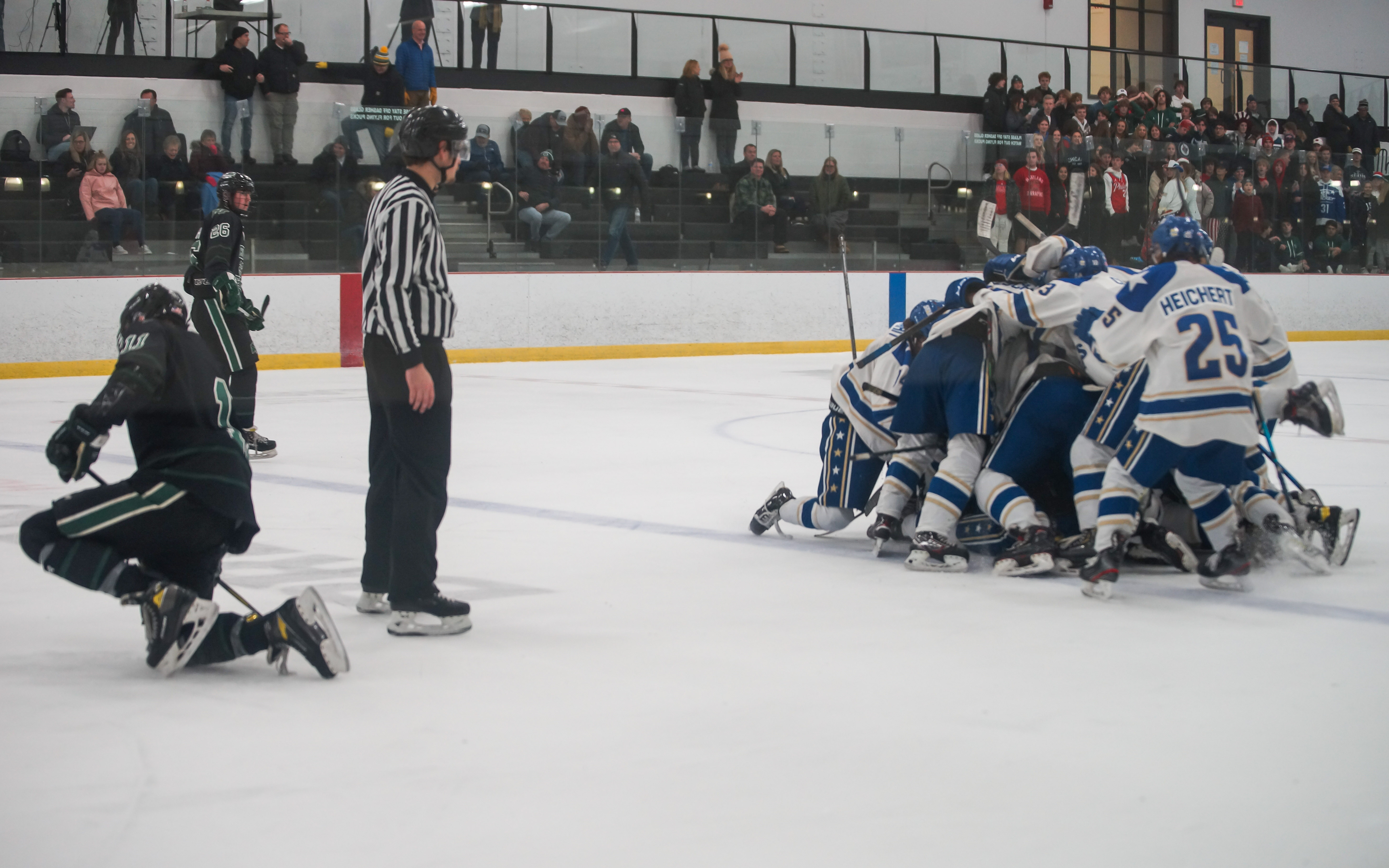 Holy Angels teammates swarm Wyatt Schmitz for throwing a puck on net that was tipped in by a Holy Family Catholic defensemen for the OT winner. Photo by Korey McDermott, SportsEngine

Holy Angels head coach Pat Griswold would like to see his team spend less time in the penalty box.

“We got to stay out of the penalty box,” Griswold said. “Every time we were gaining momentum, we were dominating at times, and then we would get penalties and just take it to ourselves.”

Despite seven infractions, spending 17 minutes in the box, Holy Angels (3-1) held firm and secured a 2-1 victory in overtime over Holy Family Catholic (2-2) Tuesday night at the Victoria Ice Arena. 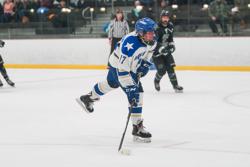 It was a gritty affair, but it was the Stars who came out stronger and faster. The road team had better looks at the net, and with that strong start, took a 1-0 lead when Noah Hermanson scored his first goal of the season.

“Carter tried to give me a drop pass,” Noah said. “It was almost so bad that it was good. Their [defense] wasn’t expecting it and it went right through his legs and right to me. I saw the goalie cheating towards the far side, so I tried to put it near side.”

Noah plays alongside his brother Carter. The two captains led the team in points last season and seemingly found a way to come up with every loose puck Tuesday night.

Hermanson’s goal gave Holy Angels a 1-0 lead, a lead they would almost hold onto for the remainder of the game.

Credit to Holy Family Catholic goalie Bennett Reinhard. The sophomore goalie came up with big save after big save to keep it just a one-score game, finishing with 25 saves.

“Their goalie is definitely one of their biggest strong suits,” Holy Angels defenseman Wyatt Schmitz said. “He kept them in the game the whole time”

One big save came with just seven minutes remaining in regulation. A diving save from Reinhard kept it a 1-0 game, and just two minutes later, the Fire’s Parker Osborne found the back of the net, off an assist from Nick Blood to tie the game and send it into overtime.

Six minutes into the eight-minute overtime, with the game seemingly headed towards a tie, it was Schmitz’s shot, which deflected off a glove and into the net, that sealed the win.

“The puck bounced out,” Schmitz said. “I just tried to put the puck into the net, and somehow went in. Got lucky I guess.”

As the overtime period started, Griswold stressed to his team just to get shots up, knowing it’s one sudden death period.

That, and the all out defensive effort, helped the Stars come out on top.

“I’m really proud of our guys that killed (power plays),” Noah said. “We did a really good job, talking with Coach Palmquist, we’re defensively sound on the [penalty kill].”

“He constantly tells us at practice to work on our gaps and sticks,” Schmitz said of Palmquist. “Just harping on us to be the best defenseman we can.” 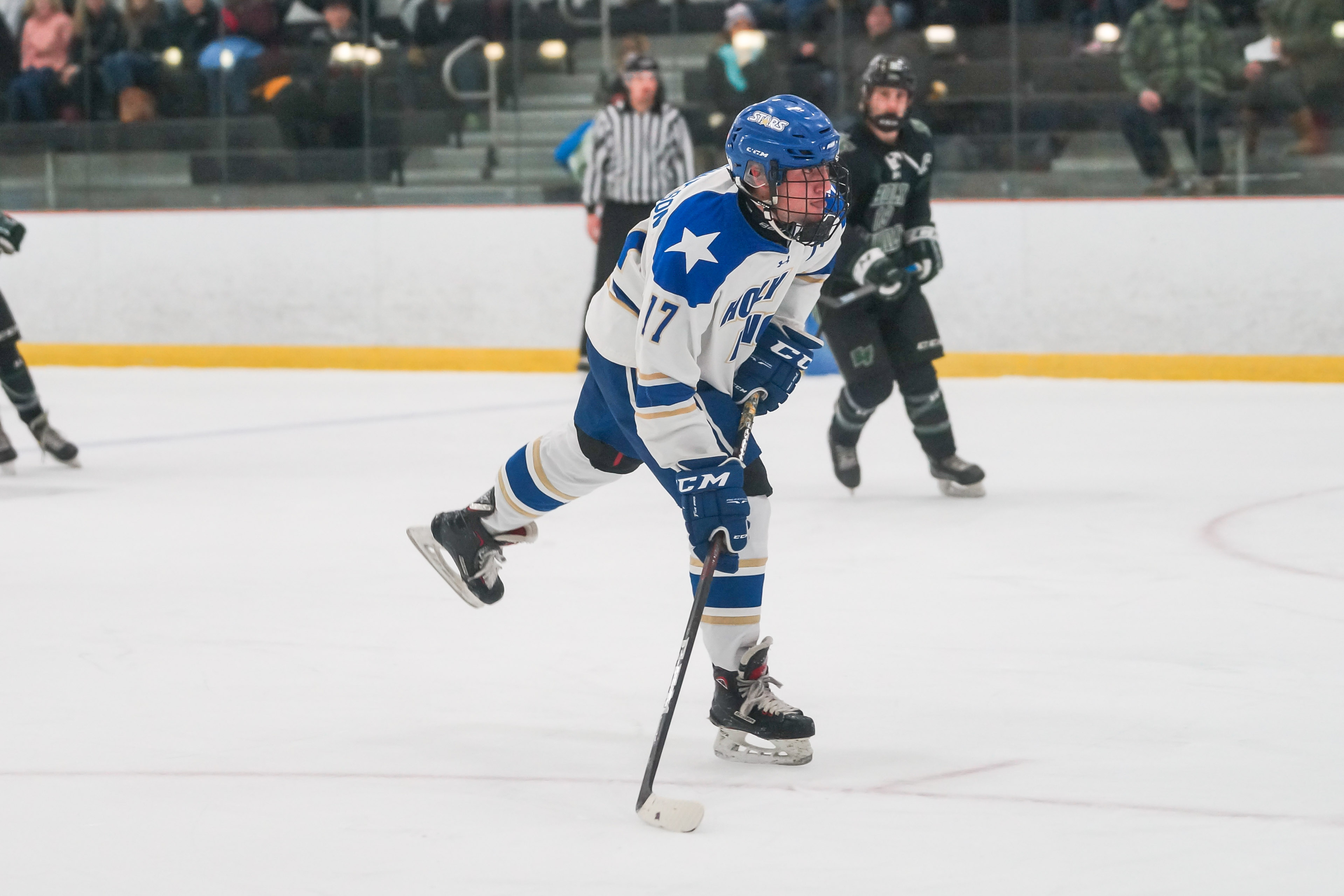 Holy Angels forward Noah Hermanson (17) eyes his shot that would turn into a 1-0 lead over Holy Family Catholic in the first period of Tuesday's game In Victoria. Photo by Korey McDermott, SportsEngine

It took three periods and six minutes of overtime for Holy Angels to pick up a 2-1 win over Holy Family in Class 2A hockey Tuesday night at Victoria Recreation Center.

Holy Angels (3-1) got off the quicker start, finding better looks at the net, and took advantage of some early Holy Family (2-2) miscues. It was a penalty-riddled first period, with Fire goalie Bennett Reinhard coming up a couple phenomenal saves.

At the 15:34 mark, however, it was the Stars who finally found an opening, when Noah Hermanson netted his first goal of the season.

Despite a couple of penalties from Holy Angels, Holy Family came away empty during power play opportunities. The Fire were much more aggressive in the second period, but could never find the net.

In the third period, Reinhard came up with clutch save after clutch save to keep it a 1-0 game. Holy Family’s Parker Osborne finally gave the Fire life, tying the game 1-1 with just five minutes remaining in regulation. It was Obsorne’s third goal of the year and it sent the game into overtime.

Both teams had great looks to end the game in the extra period, but it was Holy Angels’ Wyatt Schmitz who scored the game winner when his shot deflected off a glove and found the back of the net. Despite being outshot 32-27, and spending more time in the penalty box, the Stars came away on top. 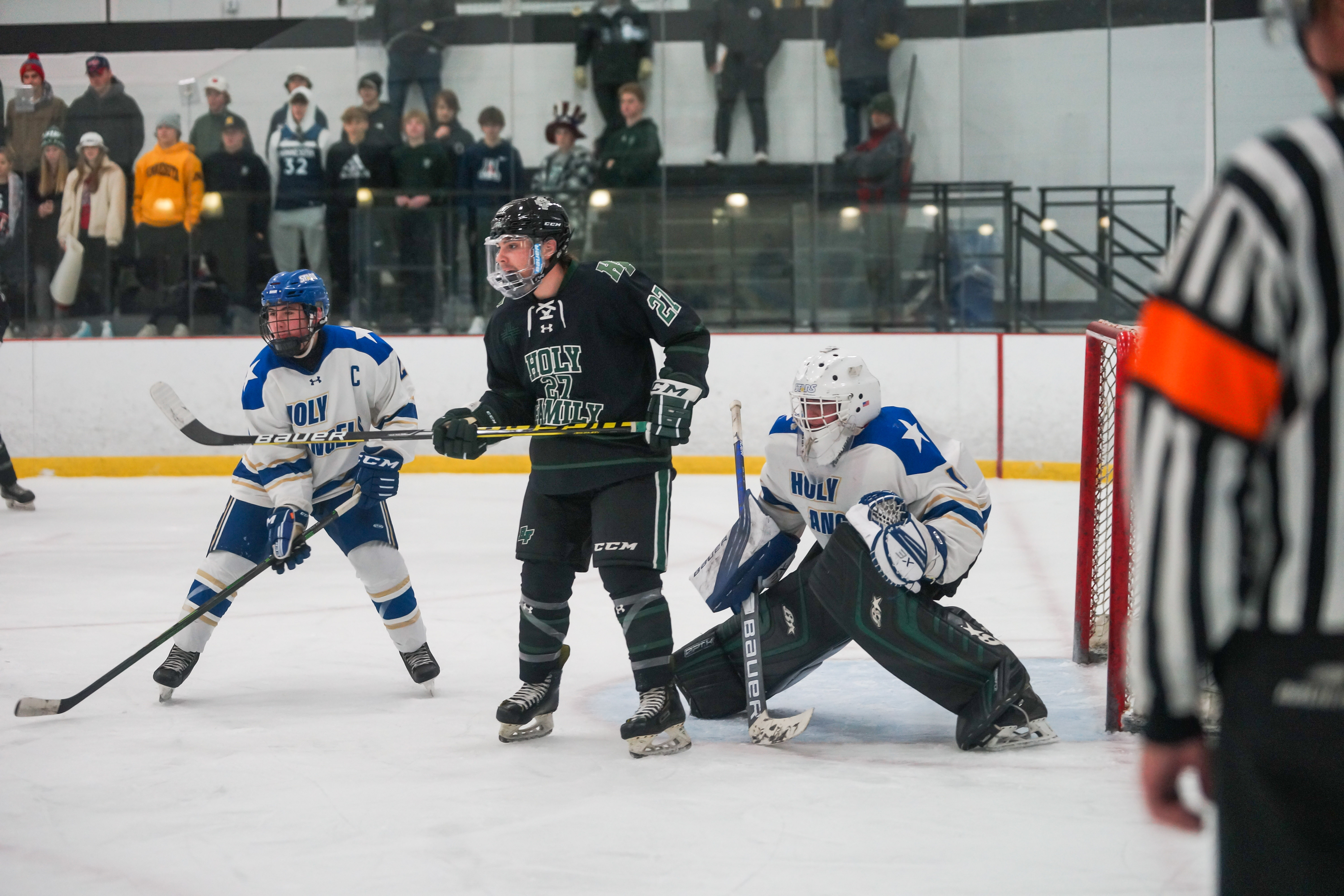 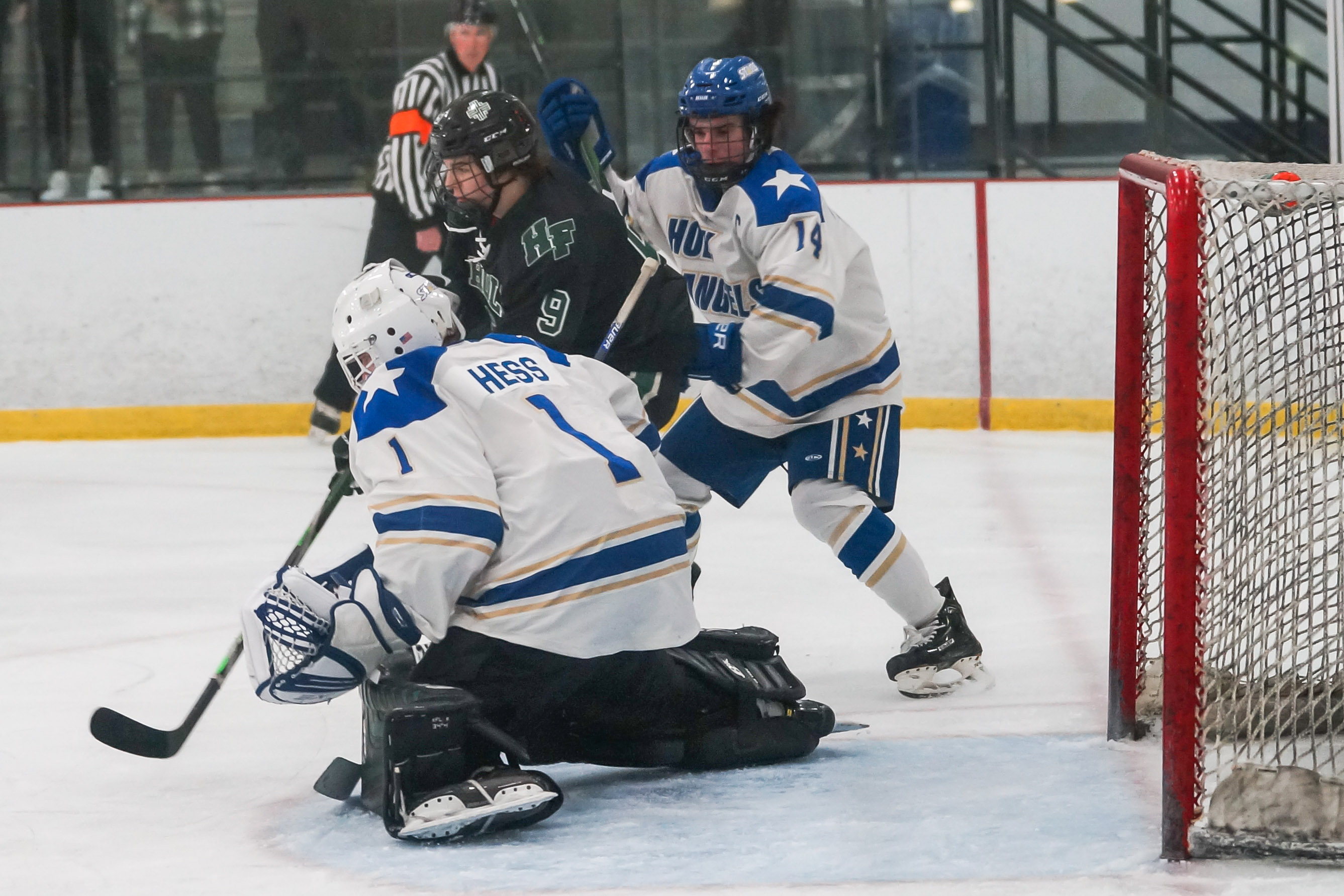