The Spuds never had a lead in the game, but also never trailed the Red Knights by more than a goal throughout the back-and-forth contest. 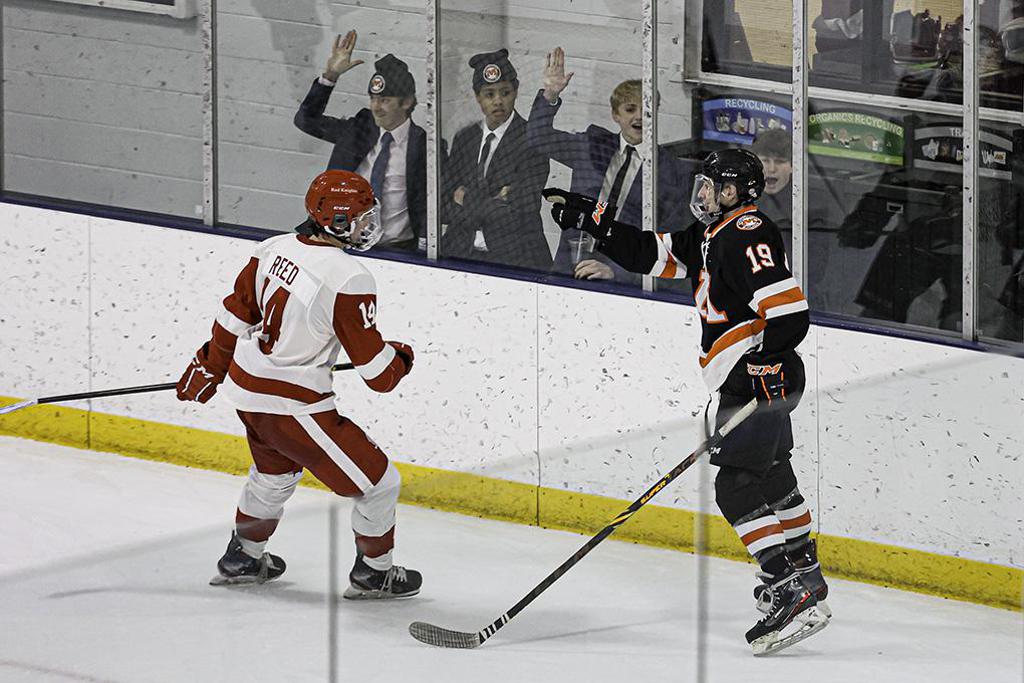 The Spuds boarded their bus at Moorhead High School a little before noon Friday morning, knowing they wanted to stay ahead of the winter storm rapidly and certainly approaching from the south.

Leaving the Rec Center in St. Louis Park many hours later in the blizzard, back on the bus bound for their west metro hotel with a 4-3 overtime victory in hand over host Benilde-St. Margaret’s, the Moorhead Spuds had reason to be merry.

A gritty, blue-collar effort parallelled that of the persistent storm outside, with the Spuds dominating along the boards and setting up their offense from behind the goal line with steadfast resolve. 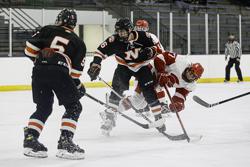 The Spuds dumped shots on Benilde-St. Margaret's like snow piled up outside, outmarking them 43-37. Moorhead’s strong defense blanketed the Red Knights’ many horses, with legit Mr. Hockey candidates, and employed a tremendous physical effort to steal a victory in a strong opponent’s barn.

Perhaps nobody in a black and orange jersey epitomized that more against the higher-ranked Red Knights (No. 10 in 2A Lets Play Hockey coaches poll)  than junior forward Harper Bentz, whose overtime goal proved highlight-worthy, an apt touch on a stickhandling clinic of his making.

Bentz, who picked up his team-leading 11th point and fourth goal this season, weaved through traffic in the neutral zone, challenging defenders in red to take him on. At first step against him, Bentz made a no-look pass to teammate Aaron Reierson on his left. Reierson sent it straight back and Bentz, who had moved behind the d-men, then buried a tip shot to lift Moorhead to their most impressive victory yet.

“All I had to do was go to the net with my stick on the ice and I knew Reierson would pass it right where it needed to be,” Bentz said. “Our confidence was good tonight.”

A play that Bentz created from nothing, attacking directly a Red Knights defensive core largely considered amongst the state's deepest and talented.

It was a perfect complement to the workmanlike product the Spuds put great effort into for four periods.

“I think top-to-bottom, this was our most complete game,” says Moorhead coach Jon Ammerman said. “I think we defended well and were persistent. We didn’t necessarily get rewarded early for some of our offensive opportunities, but we stuck to it. We didn’t try to get too out of what it is we do.”

Bentz agrees and says getting pucks deep is something his team is tremendously proud of.

“It was important that we got pucks low and kind of worked it and along the boards,” he says. “We’ve got a lot of big kids, and that’s a big part of our game.”

The victory is an important one for Moorhead, who will head northwest to face Buffalo Saturday afternoon before heading home up Interstate 94 with the winter storm hopefully subsiding.

The Spuds expect to enjoy and work the process of extensive winter travel that big northern schools do regularly.  Friday night was a good reminder why.

“Every game is pivotal,” Ammerman says. “Section games have more weight because of seeding, but try to play with the best teams in the state.” 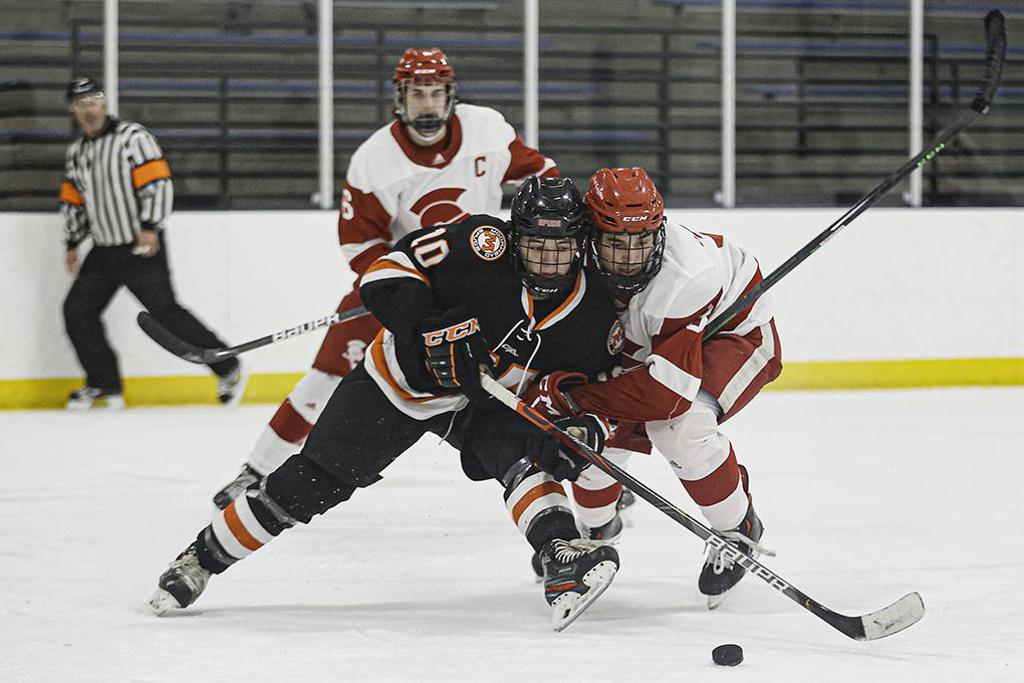 Moorhead's Joe Kortan (10) and Benilde-St. Margaret's Mason Stenger (3) battle for control of the puck in the third period. Photo by Mark Hvidsten, SportsEngine

Harper Bentz weaved through traffic in the neutral zone, and after crossing the blue line fed a perfect no look pass to teammate Aaron Reierson on his left. Reierson sent it straight back and Bentz buried a top-shelf shot to lift Moorhead to a gritty 4-3 overtime victory over Benilde-St. Margaret’s Friday night at the St. Louis Park Rec Center.

A competitive battle that saw three ties and four lead changes was settled in overtime in what ought to be considered a premier early-season matchup in Class 2A.

Benilde-St. Margaret’s (2-3) struck first and Moorhead (3-3) chased the rest of the way, not leading until the decisive overtime score. A gritty performance along the boards and behind the net carried the Spuds at times and set the tone for long stretches.

Gavin Lundberg and Thomas Schroeder eached finished with a goal and an assist, while Reierson and Carson Triggs contributed to key assists each. Wyatt Tweet also added a pivotal goal late in period two that kept BSM at arms length.

Goaltending was strong on both sides, with Red Knights’ goaltender Mason McElroy stopping 39 of 43 shots, while his counterpart Kai Weigel made 34 saves on 37 shots.

Benilde-St. Margaret’s got its scoring from three different sources, with Adam Marshall, Mitchell Dokman and Peter Giertsen contributing. Marshall is now tied for the team lead with three goals and six points on the season. 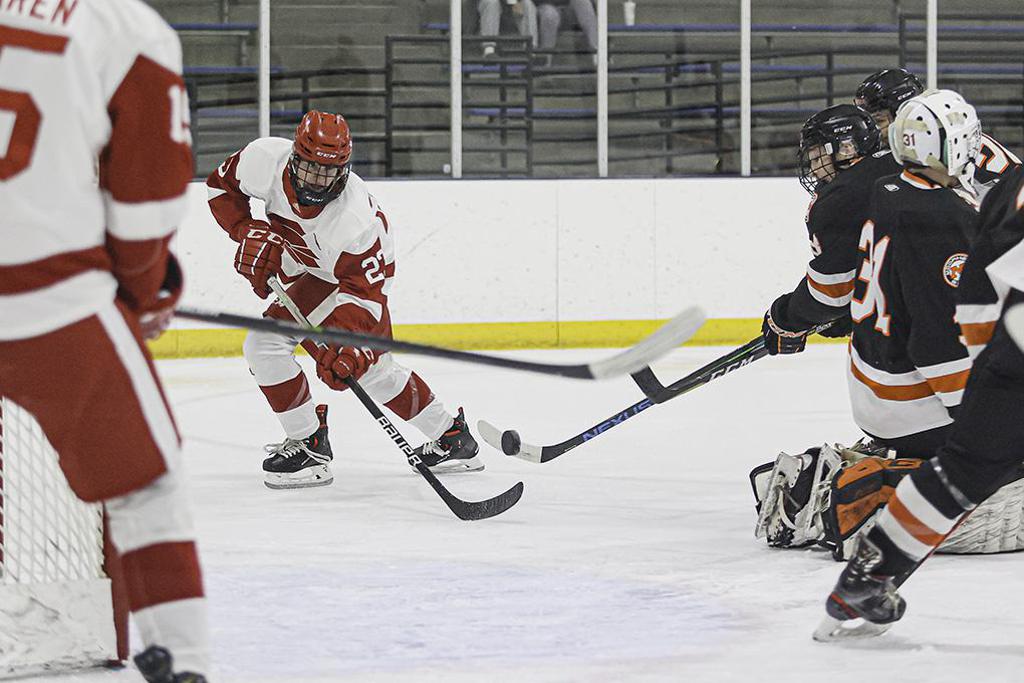 Benilde-St. Margaret's junior Peter Giertsen started the scoring in the first period with this shot. It was his first goal of the season. Photo by Mark Hvidsten, SportsEngine