The Huskies' penalty killers stayed strong throughout while the offense capitalized on opportunities. 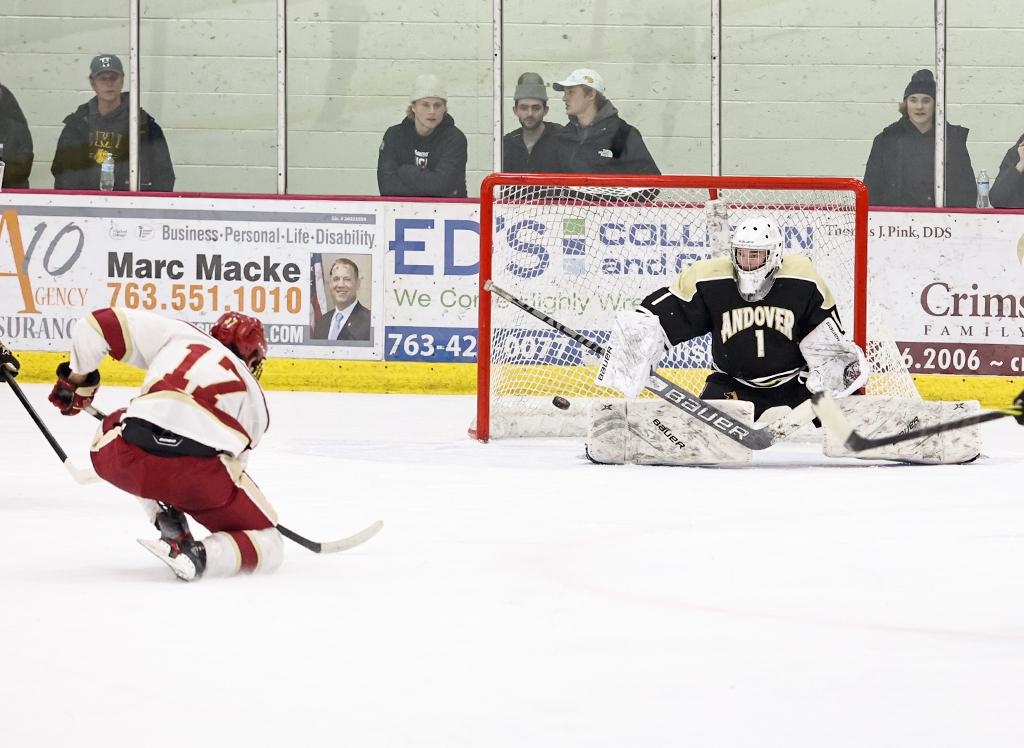 Andover's Austin Brauns stops a shot close out the second period. Brauns had 34 saves, tallying 16 in the second period, in a 5-3 win over Maple Grove. Photo by Cheryl A. Myers, SportsEngine 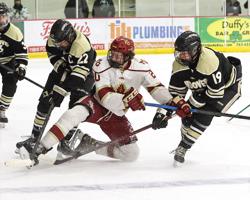 Brauns finished with 34 saves and helped to stop dozens of top-tier scoring chances for Andover (5-1 and ranked No. 5-2A in this week’s coaches’ poll) to skate away to a compelling victory over the third-ranked Crimson (5-2-1).

The spark was kindled in the back and spread forward to the next line, a defensive corps that began to assert itself more as the game went on. When the Huskies’ forwards started cashing in on their opportunities in and around the net, the trajectory was where it needed to be for Andover to win despite being outshot 37-27.

It was simple where the credit should go.

“We got great goaltending,” Andover coach Mark Manney says. “It was huge, he made a ton of great saves, and he was having fun doing it.”

Brauns squashed six of seven power plays from the Crimson to provide the steadying influence Andover needed before its offense was able to cash in on what chances were provided.

Nervous play by both sides opened up and carried through the second into the third, until Andover scored four to pull away from what became a fiery finish. In all, Andover’s defense pairings took a step forward collectively against a Maple Grove team incredibly skilled at moving the puck.

“We were able to get the puck out of harm’s way,” Manney says. “We didn’t give them a lot of second chance.”

The forwards, outshot but not undaunted, went to work.

“I think we were committed to getting pucks deep, and trying to outwork their defensemen,” Hudson Zinda says. “We spoke about it in the locker room (after the second period) and then we went out and did it.”

Zinda scored the team’s first goal in the first period, and the team’s last goal in the third to give him a team-leading six goals on the season. Minutes later, he was blocking a string of shots as Maple Grove kept hammering away.

“We expect that kind of two-way player out of him,” Manney says of Zinda. “He’s always been a hard worker, but hasn’t always had the scoring opportunities. Now he is, and he’s taking advantage of it.

Zinda credits Brauns: “His play was a big part of this game." And Brauns credits Zinda. And they both credit the defense.

All in all, an imperfect but impressive top to bottom win in a top-five matchup with conference standings implications. Looking ahead to winter break but with more challenging games ahead, the Huskies will take this one.

“I think it gives us a little momentum and a great confidence builder for all the boys,” Brauns said. 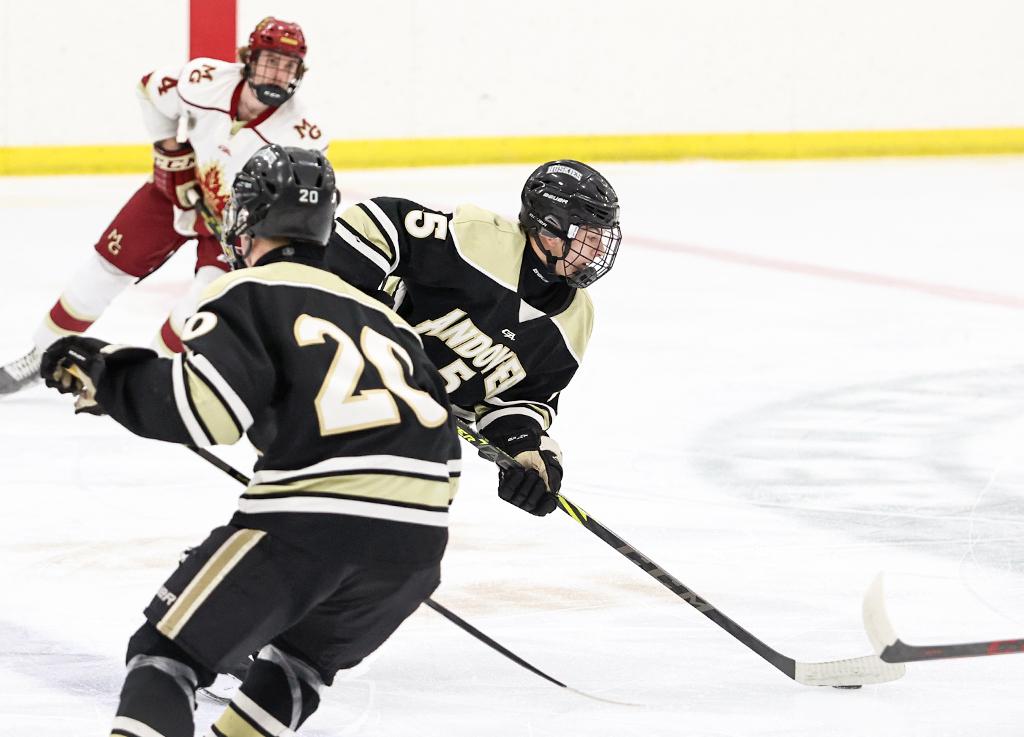 Andover's Hudson Zinda (5) picks up a loose puck in the neutral zone. Zinda scored two goals in the game and leads the Huskies with six goals this season. Photo by Cheryl A. Myers, SportsEngine

Brauns stopped 34 shots and squashed six of seven power plays from the Crimson to provide the steadying influence Andover (5-1 and ranked No. 5-2A in this week’s coaches’ poll) needed before its offense was able to cash in on the chances were provided.

Zinda scored the team’s first goal in the first period, and the team’s last to give him a team-leading six goals on the season.

Finn Brink led the Crimson (5-2-1 and ranked No. 3-2A) with a pair of goals to push his season total to eight, while Landen Gunderson tallied three assists in the loss. 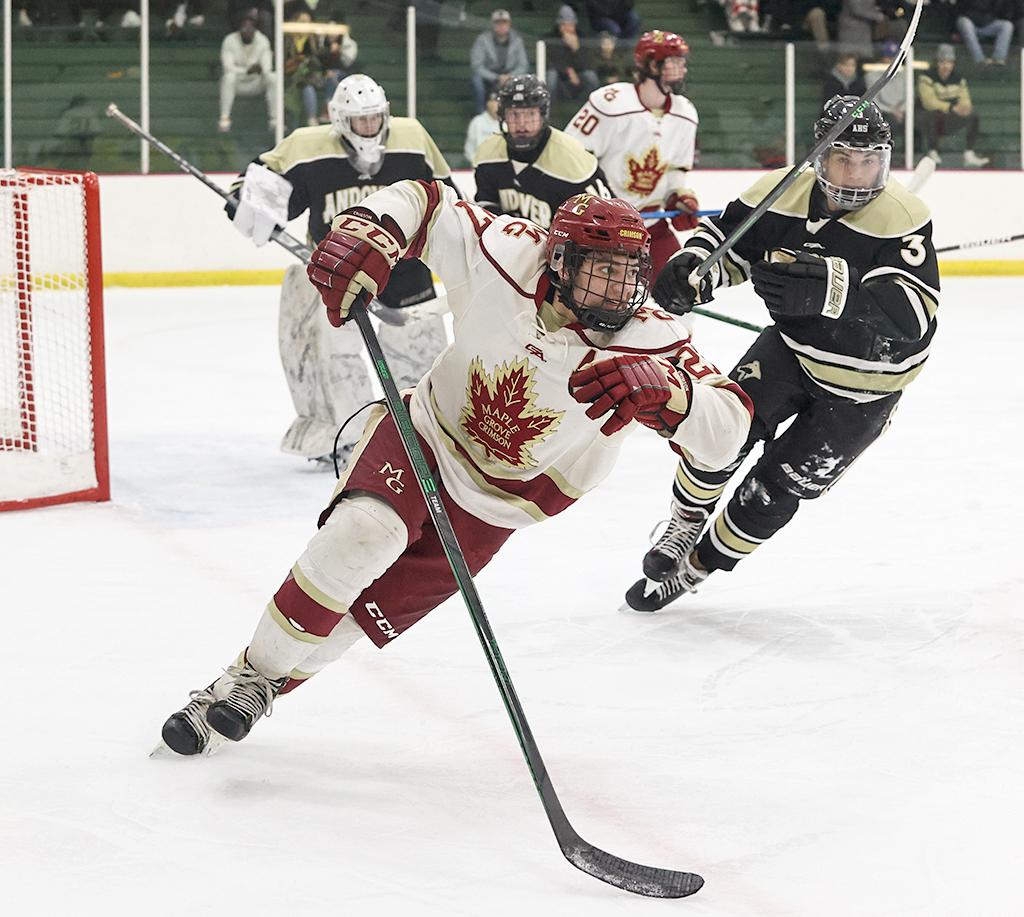