Class 2A titans clash as Andover slips past Hill-Murray

The Huskies won in overtime thanks to an acrobatic goal from Cayden Casey. 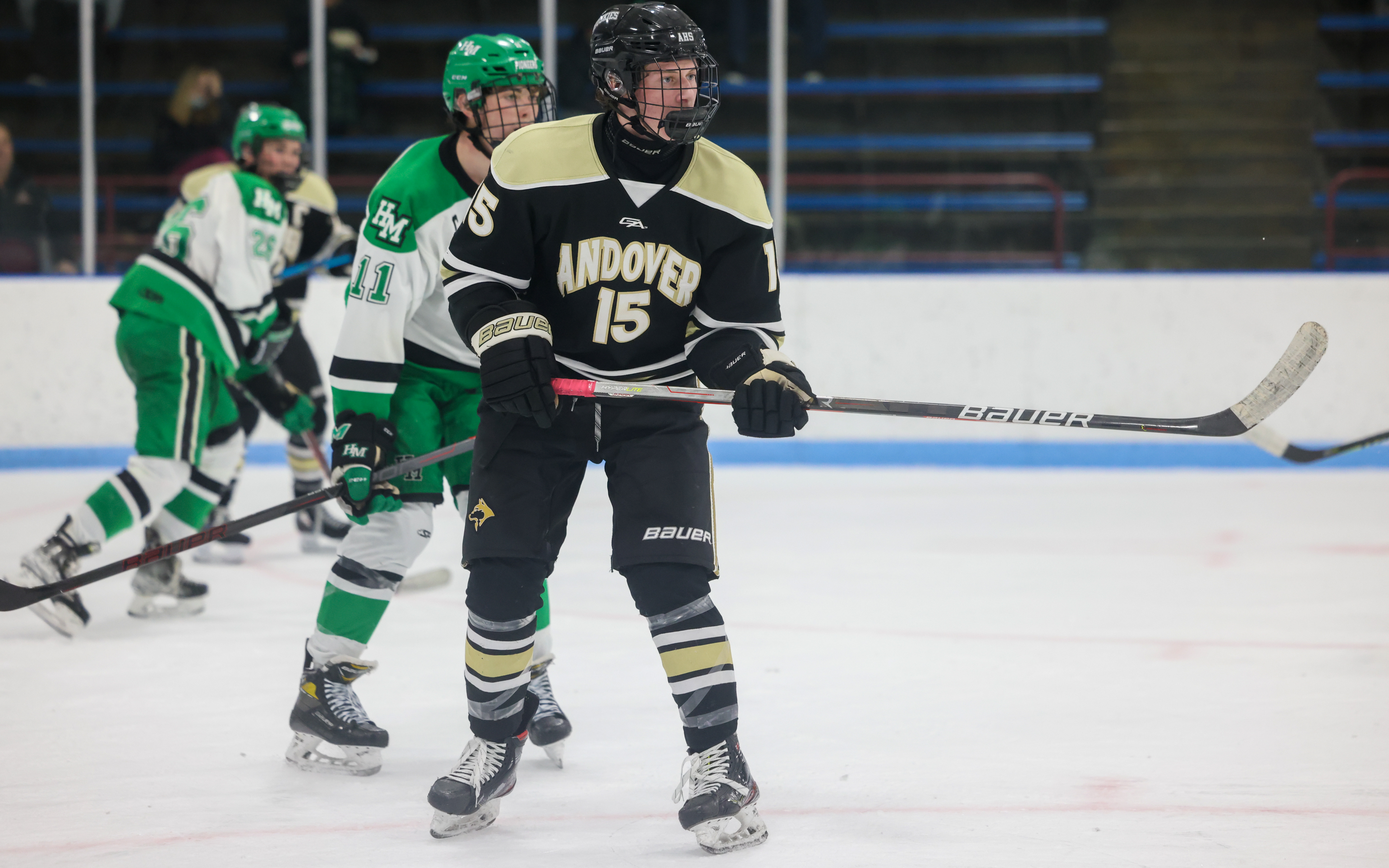 Andover's Cayden Casey scored the game-winning goal in overtime against Hill-Murray Wednesday night. Casey also added an assist in the Huskies’ 2-1 victory over the Pioneers in Bloomington. Photo by Jeff Lawler, SportsEngine 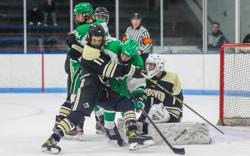 For the better part of a second, or perhaps even longer, Cayden Casey was a man with options.

Andover senior forward Logan Gravink had just avoided two attackers in his own end to chip the puck into the neutral zone and onto the stick of teammate Gavyn Thoreson. Locked into the tightest of battles where time and open space were at a premium, the Huskies' attack could barely believe what they were seeing develop: a two-on-one.

Thoreson carried the puck just past the blue line and quickly fed it across the top of the circles to his linemate trailing just a bit behind.

A relative eternity while charging the net with the puck on your stick and the adrenaline pumping, a decision was thrust upon the Huskies’ talented junior forward to pass it back to Thoreson or take it himself.

“I guess I just got lucky,” Casey said. “I saw the (defenseman) was staying on Gavyn, so I just made a move.”

Casey waited, then executed a toe drag in the patch of ice between the bottom of the circle and crease. Once Hill-Murray goaltender Nick Erickson bit and went down, Casey calmly moved around him and beyond the goal line for a moment before his forehand found just enough room to tuck it into the back of the net.

That’s what it took for Andover (9-1-1), ranked No. 3-2A in last week’s Let’s Play Hockey coaches’ poll, to keep its winning ways intact with a dramatic 2-1 overtime victory over Hill-Murray Wednesday night at Bloomington Ice Garden.

“I thought Thoreson did a great job of moving the puck early to Casey, and the (defenseman) had a bad gap and got caught kind of in no man’s land,” Manney said. “Casey made a special move. But (Thoreson and Casey) never look each other off, they’re too unselfish. For Casey to look over and (make that play) was pretty good.”

Perhaps it was just instinct.

“I was thinking about forcing it,” Casey said. “And then, I thought, maybe I’d be better off to try and do something with it. I made the right play, apparently.”

Unselfish play seems to be working for Andover as it won its fourth straight game and second over a top-five ranked team over Hill-Murray (No. 5-2 with a 7-3 record) in as many nights.

Casey and Thoreson had a hand in both goals against Hill-Murray and rest as the team’s top two points producers. Thoreson leads the team with eight goals and 17 assists for 25 points, and Casey (8-14-24) is right behind him.

Coming off an emotional win over Cretin-Derham Hall the day before, Andover was slow to get going against a talented and disciplined Hill-Murray squad that took an early lead on its first shot. Andover, however, would answer later in the opening period, and the teams played level the rest of the way. Senior goaltender Austin Brauns settled in to stop 21 shots and improve his record to 8-1-1, lowering his goals-against-average to 1.49 while boosting his save percentage to .936. All of which puts him amongst the state’s top five goaltenders statistically.

At the other end of the ice, Brauns wasn’t shocked by what he saw Casey do with the puck.

“He always does stuff like that (in practice),” Brauns said. “He’s pretty fancy with it.”

However they come, Andover will keep welcoming the wins. The Huskies have not lost since a trip north to Moorehead on Dec. 3. Good teams find ways to win games, and the Huskies are getting the job done with whatever works.

“In overtime, those are the goals that happen,” Manney said. “There is some mistake or a puck bounces over a stick, so you just have to be ready when your opportunity comes.” 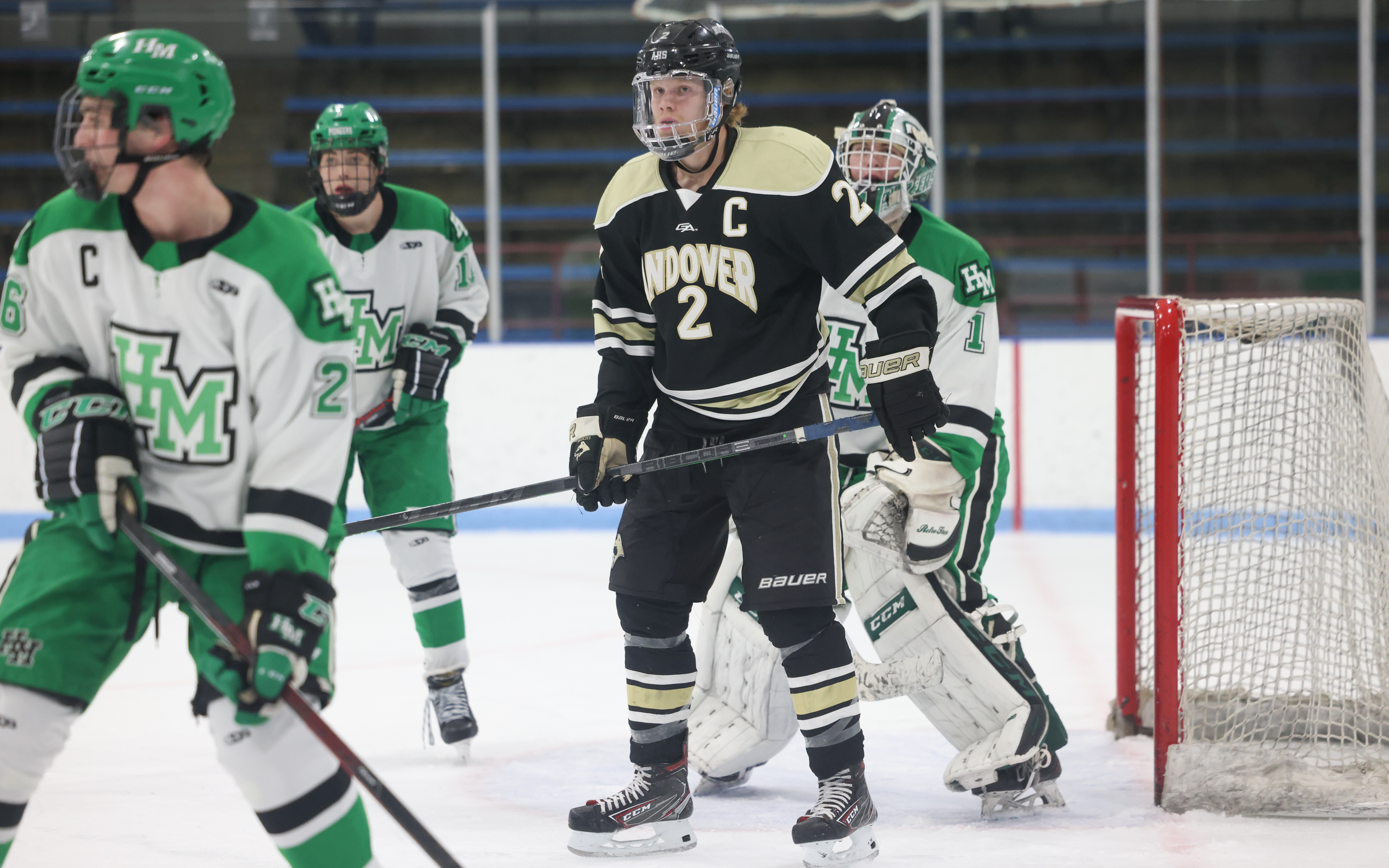 Kyle Law (15) sets up a screen in front of the Hill-Murray net during an Andover power power play Wednesday night. Law had a goal and an assist in the Huskies’ 2-1 overtime victory against the Pioneers. Photo by Jeff Lawler, SportsEngine

A tight and physical game went the distance and beyond before the decisive score that capped off a rare two-on-one in a game where time and space were at a premium. Andover (9-1-1), ranked No. 3-2A by the Let’s Play Hockey coaches’ poll, continues its roll through December with the hard-fought win over No. 5-2A Hill-Murray (7-3-0).

Hill-Murray struck 2:06 into game when Nate Hardy scored from mid-left circle to push the Pioneers out front early with a single assist to senior defenseman Leo Gruba.

Later in the period, Andover's Kyle Law netted the equalizer after burying a pass on a triangle tic-tac-toe, with assists from Gavyn Thoreson and Casey with 2:37 left in the period.

Goaltending was stout at both ends, with Austin Brauns stopping 21 shots for Andover while his counterpart Nick Erickson stopped 17 of 19 for Hill-Murray. 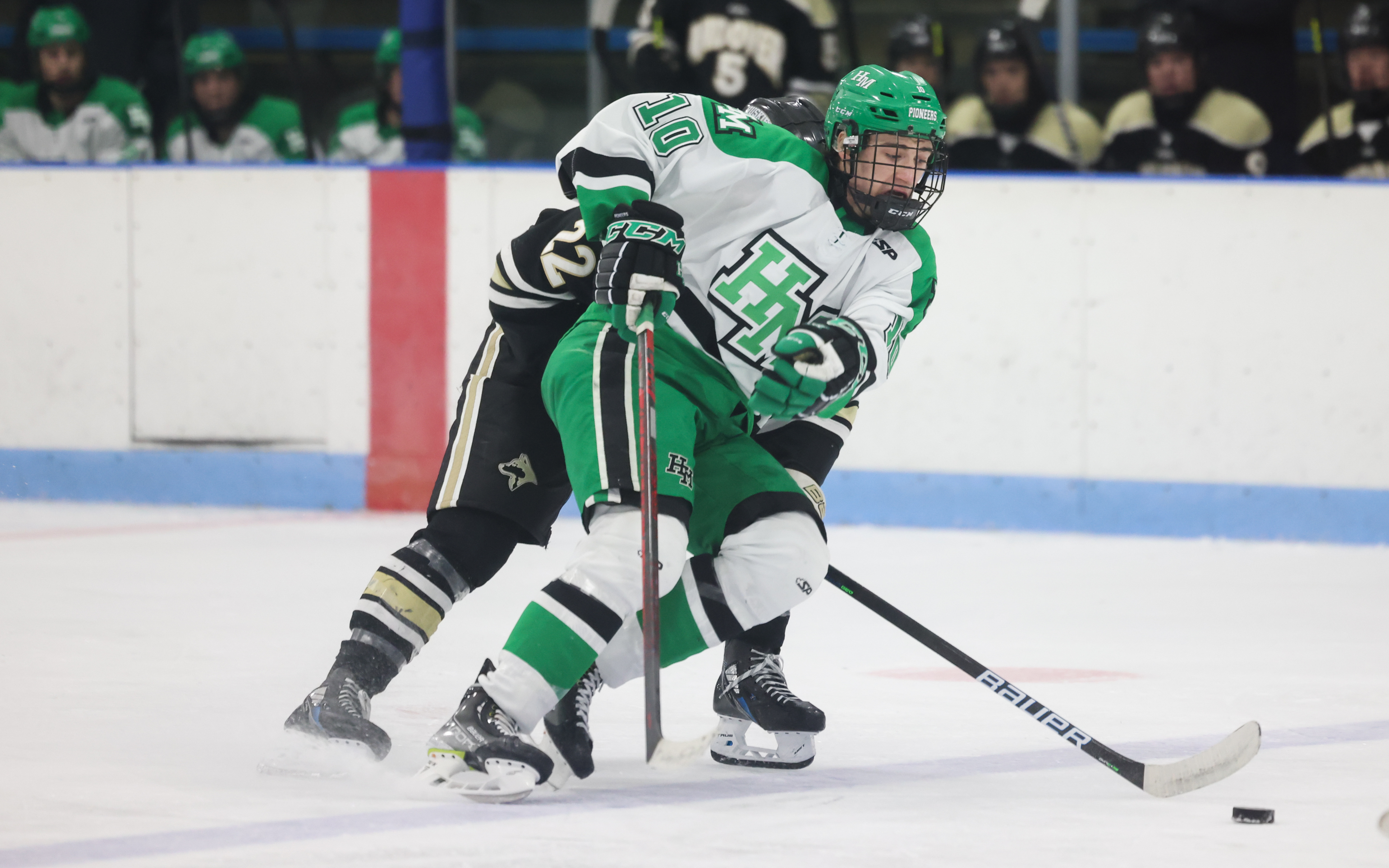 Nate Hardy (10) scored the only goal for Hill-Murray in the Pioneers’ 2-1 overtime loss to Andover Wednesday night in Bloomington. Photo by Jeff Lawler, SportsEngine