The Lions extend their winning streak to nine games with win over the Moose. 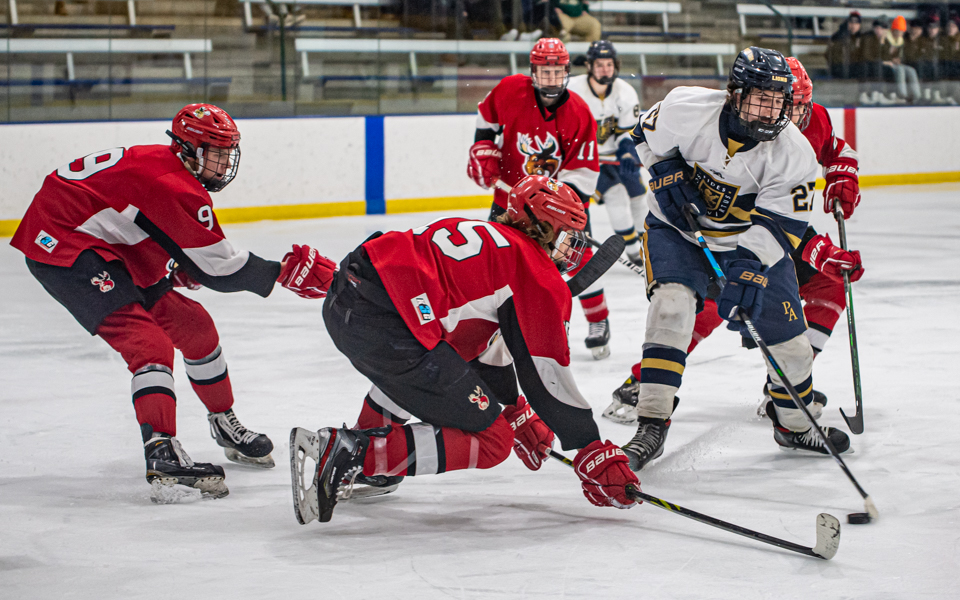 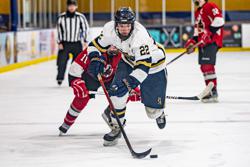 Providence Academy boys’ hockey talked early this season about what it wanted to accomplish for the 2021-22 campaign. The Lions would like to make some noise in their competitive Section 2 in Class 1A to break through for an inaugural trip to the state tournament. But throughout the game-by-game stretches of the season, the Lions don’t dwell on it too much, keeping in mind this motto:

“Chase the goal, not the competition,” Providence Academy coach Chris Lewis said. “And so that’s what we’re doing. We’re chasing our goal. We’re not chasing the competition.”

So far this season, it’s the competition which has chased Providence Academy, a team that’s rattled off nine straight wins after a 4-1 victory over Monticello on Thursday at Plymouth Ice Center.

Three of the four goals for the Lions, ranked No. 9 in Class 1A Coaches' Poll, came from the line featuring sophomores Louie Wehmann, Sammy Lewis and junior Johnny Hendrickson. Lewis bookended the scoring Thursday while Hendrickson added a goal and an assist.

Hendrickson played in only his seventh game this season after breaking his right hand earlier on in the schedule. Missing games throughout December, Hendrickson played two games in a row for the first time in about a month this week. The result? A four-goal, five-point effort on Tuesday in an 8-3 victory at St. Paul Academy and his two-point night against Monticello.

After a slow recovery, his hand feels good, he said.

Hendrickson has nine goals and 16 points in his seven games this season.

“Johnny’s an impact player,” coach Lewis said. “Just getting him back in the lineup is awesome for the team. He’s a leader.

With all three players on the varsity hockey squad last year but not playing together, Hendrickson and his linemates put themselves together in camp prior to this season, coach Lewis said. They clicked and the coaching staff left them together. It’s worked out well thus far.

“We’re a talented line; we have a lot of stuff going for us,” Lewis said. “But I think we just work together. We’re unselfish. I make a bad pass to Johnny, I’m coming off, I’m saying ‘that’s on me.’ We’re accountable with each other.”

Thursday, it was Lewis who got the Lions on the board first. Sophomore defenseman Jack Anderson passed the puck directly from behind the net out front to a waiting Lewis, who didn’t hesitate on the quick shot at the goalmouth.

With about two minutes left in the first period, Lions sophomore Andrew Owen made a coast-to-coast solo effort, taking the puck from his own zone’s faceoff all the way down to the opposing goal for his 12th goal this season.

But 40 seconds later, the Moose cut into the deficit to make it 2-1 when their top scorer Wilson Dahlheimer slid the puck to his wide-open teammate, sophomore Roman Thompson, who buried the puck top-shelf. Thursday’s loss for the Moose (4-10) ties their season-long losing streak at three games. They’ve lost five of their past six contests.

Only one minute, 18 seconds into the second period, Hendrickson regained the two-goal lead for his team when he was left alone and went for the high-snipe shot for his ninth goal of the year. On another play off the rush later in the period, Wehmann fired the puck toward Sammy Lewis as he crashed the net and scored for the 4-1 lead. Wehmann is the team’s leading scorer with 15 goals and 32 points this season.

“I think the style we play is just pucks hard to the net,” Lewis said. “I think we’re a very unselfish team. Just pucks to the net, working hard, doing the little things gets us our goals a lot.”

There was no scoring in the third period, but the Lions took two penalties and coach Lewis said they “kind of went back on our heels” in the final 17 minutes, though it’s something they can fix pretty easily, he added.

Indeed, if it’s not broke, don’t fix it during a nine-game winning streak. Coach Lewis said this year’s squad has a good shot to make a push when it comes to the postseason. About halfway through the season, they’ve got to stay healthy, keep working hard and doing the little things, he added.

“I’d say we’re right where we want to be,” Hendrickson said. “We just keep on getting better, at this rate, we’ll peak right when we need to peak going into sections. I think we’re playing the way we want to play.” 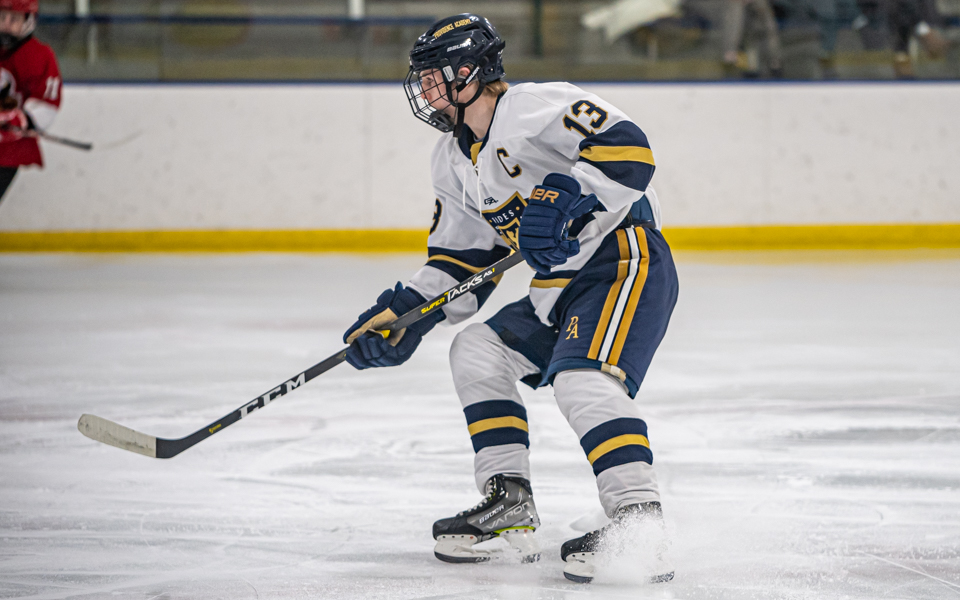 Providence Academy pushed its winning streak to nine games with a 4-1 victory over Class 1A-foe Monticello on Thursday at Plymouth Ice Center.

Sophomore Sammy Lewis scored a pair of goals, while junior Johnny Hendrickson added a goal and an assist as the Lions, ranked No. 9 in Class 1A Coaches' Poll, improved to 11-2 on the season.

The loss for the Moose (4-10) ties their season-long losing streak at three games. They’ve also lost five of their past six contests. 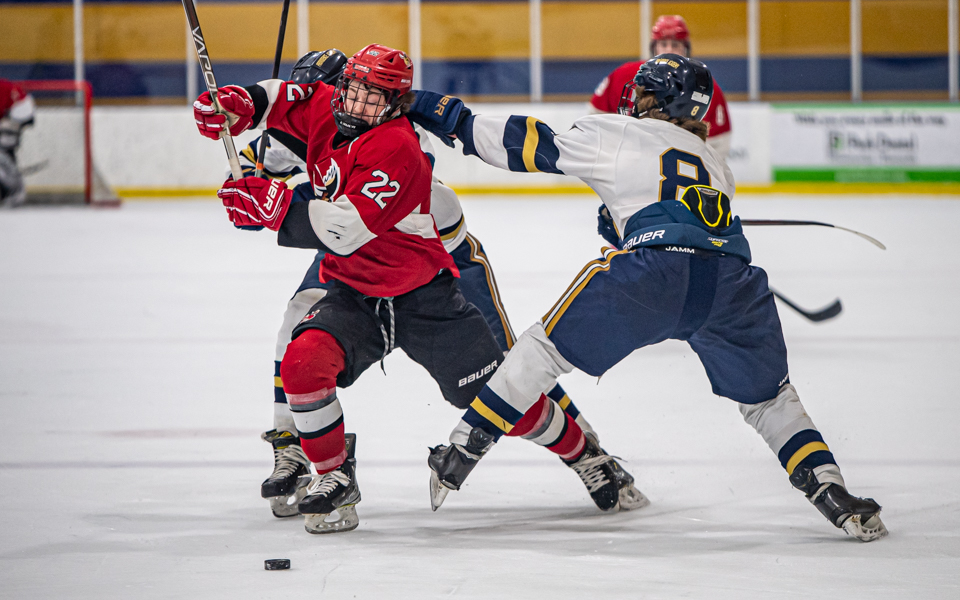 Wilson Dahlheimer (22) splits the defense and gets an assist in the first period. The Moose lost to the Lions 4-1 at the Plymouth Ice Center. Photo by Earl J. Ebensteiner, SportsEngine