Max Strand tallies seven points, and Noah Urness gets five points as the Rams skate to a convincing victory. 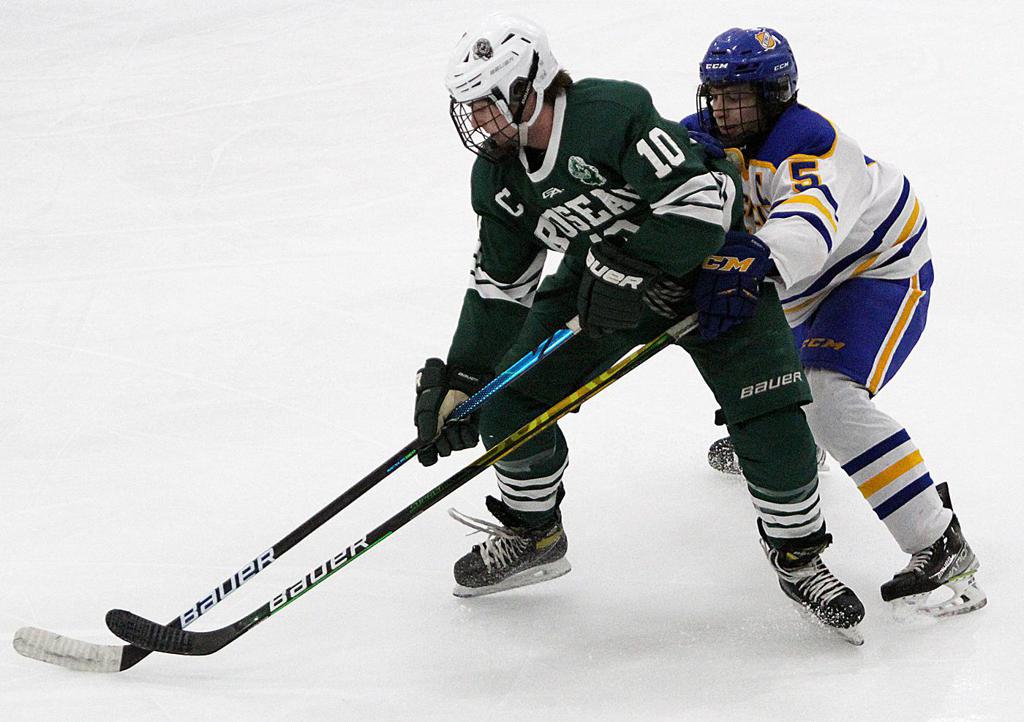 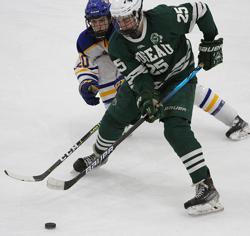 There’s no such thing as bus legs for Roseau.

The Rams, ranked No. 8-2A in the Jan. 19 coaches poll, hammered host St. Michael-Albertville 9-2 Friday night, just hours after hopping off a yellow school bus where they spent the majority of their day. The trip that began at 7:30  a.m. in Roseau, with a brief layover in St. Cloud. The team spent more than six hours and 360 miles before it’d get its chance to play.

It could have been easy to look past St. Michael-Albertville. Talented, yet it was losers of 11 of its last 12, and the Knights are an increasingly unlikely threat to section seeding race. Instead, just minutes after the puck dropped in the evening, the Rams seized control for good and outworked their hosts with big pressure and a heavy forecheck.

It started to roll and eventually rolled into a snowball-type victory.

“It hasn’t really been our strength lately, to get the jump on things,” Roseau coach Greg Lund said. “You never know with kids, but the boys came out flying tonight.”

Centerman Max Strand, a senior captain, made his mark on seven of the nine scores with five assists and two goals, and winger Noah Urness tallied a hat trick and five points as the Rams top-end corps continue to show up as one of the state’s most elite front lines.

“We definitely came out flying today,” Strand said. “Our top two lines are very good, there’s a lot of chemistry and interchange.”

“Since the win against Warroad, we’ve got a bit of hop in our step,” Urness said, referring to the team’s 4-3 win over their rival on Tuesday that earned them a season split with the Warriors. “We knew we would have to keep moving our feet and never let up.”

Roseau led 4-1 after one period and 6-2 after the second before finishing it off in the third when given a five-minute major powerplay to start with. Nothing produced in four tries prior with the man advantage, Roseau scored three times on the major and kicked in the running clock with determination.

“Five-minute power play, we knew that if we could pop a couple right away then that would likely seal the deal,” Strand said.

Stand’s performance Friday keeps him in the state’s top 10 leaders for both goals (27) and points (56) and keeps him the top points producer of any Class 2A player.

“We’ve got a couple of lines that are as high-potent offense as anyone else we’ve seen.” Lund said. “Those five show up every game and put up a lot of points for us.”

One huge benefit in Roseau’s big victory Friday is it allowed for extensive play and experienced banked for the Rams’ third line. Depth has been a concern for Roseau this season, and section opponents they are sure to face in Section 8AA bring more well-rounded and balanced rosters.

If Roseau is expected to play under more pressing circumstances, battle-weariness at the top could put them at a disadvantage. Certainly if expected to play against top teams in a stretch should they advance to the state tournament and face that three-day stretch.

Roseau’s strength of schedule is the ninth most difficult, according to the QRF rankings, just a notch above main rival Moorhead, winners of 11 straight and right behind the Rams as Section 8AA’s top seed for next month’s section playoffs.

All the more important to get everyone involved in a section victory Friday that is sure to build confidence.

“It’s big to get (the third line) involved and get more experienced,” Strand says. “It adds a lot more depth, and with sections approaching, we are learning more and more that we can trust that.” 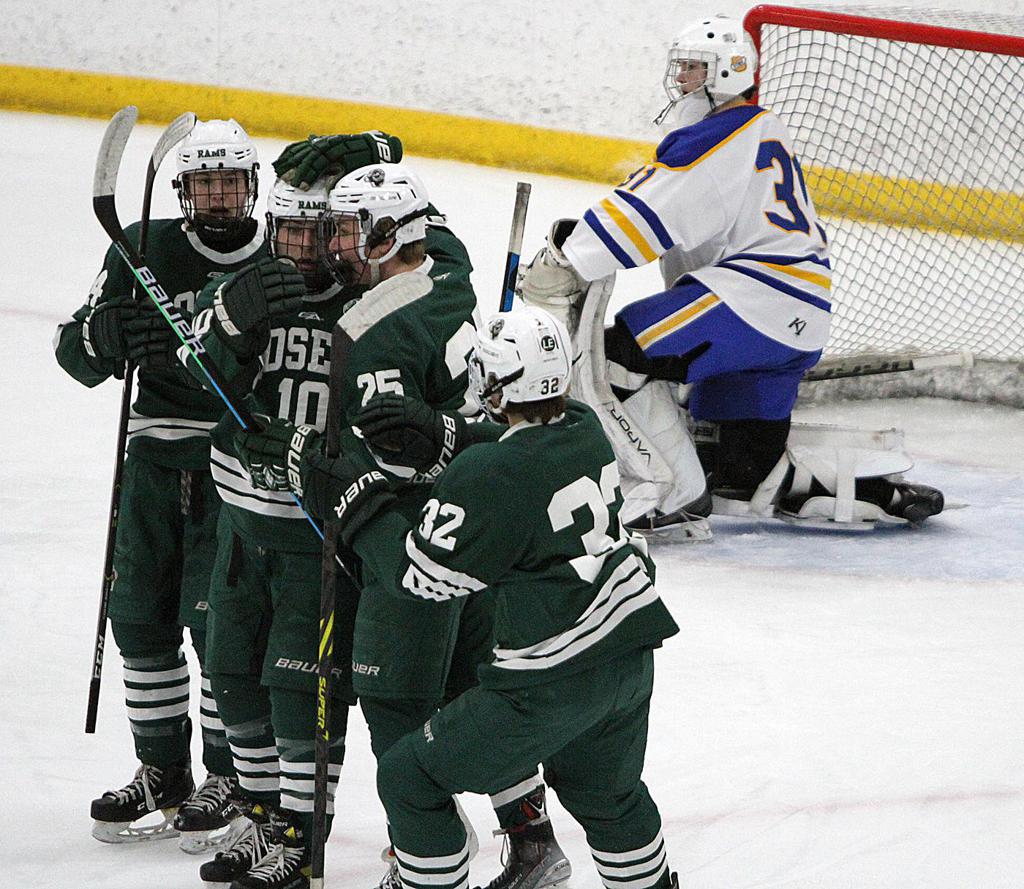 The Rams (15-3), ranked No. 8 in this week’s Class 2A coaches’ poll, needed just 2:40 to take the lead when Aaron Wensloff started the scoring for Roseau. Adam Severson added another barely more then a minute later, and Roseau was off to the races.

Tyler Jordan and Kemry Stich each scored for St. Michael-Albertville (6-12), who has lost 11 of its last 12 games.

Carter Christianson earned the win between the pipes for Roseau by stopping 23 of 25 shots. His counterpart, Austin Dietrich, made 35 saves on 44 shots for the Knights. 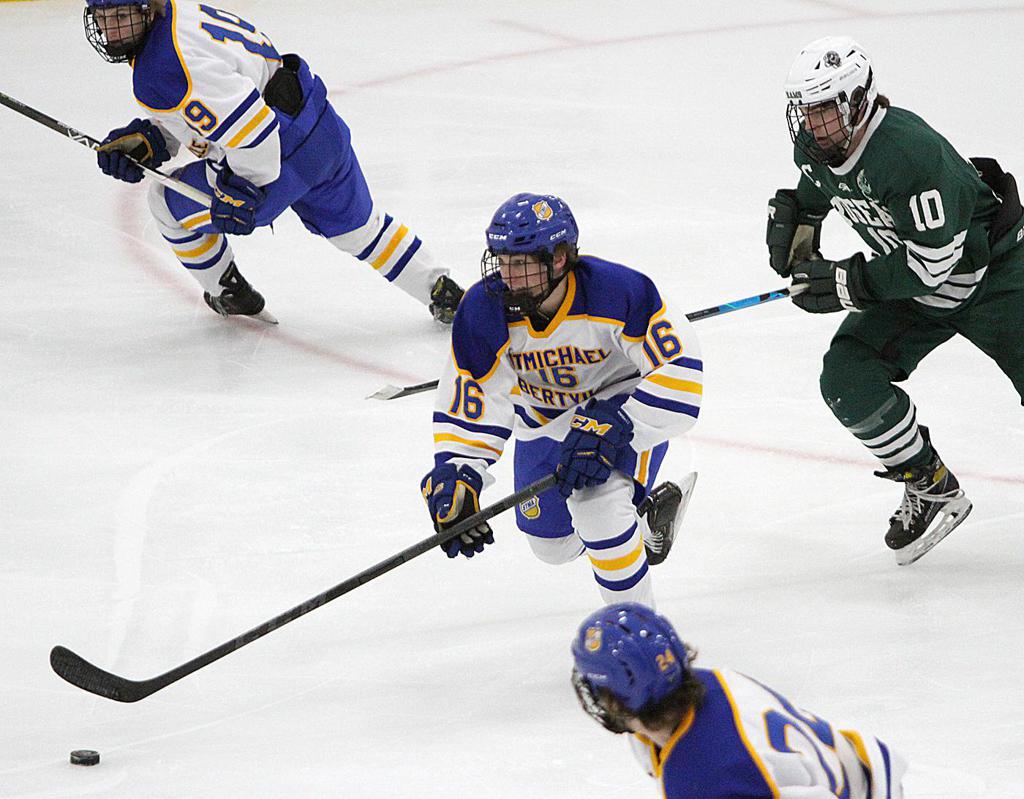