Rogers rides a rare No. 1 seed into the boys’ hockey section playoffs

A change in assignments means the team stays closer to home for the postseason. 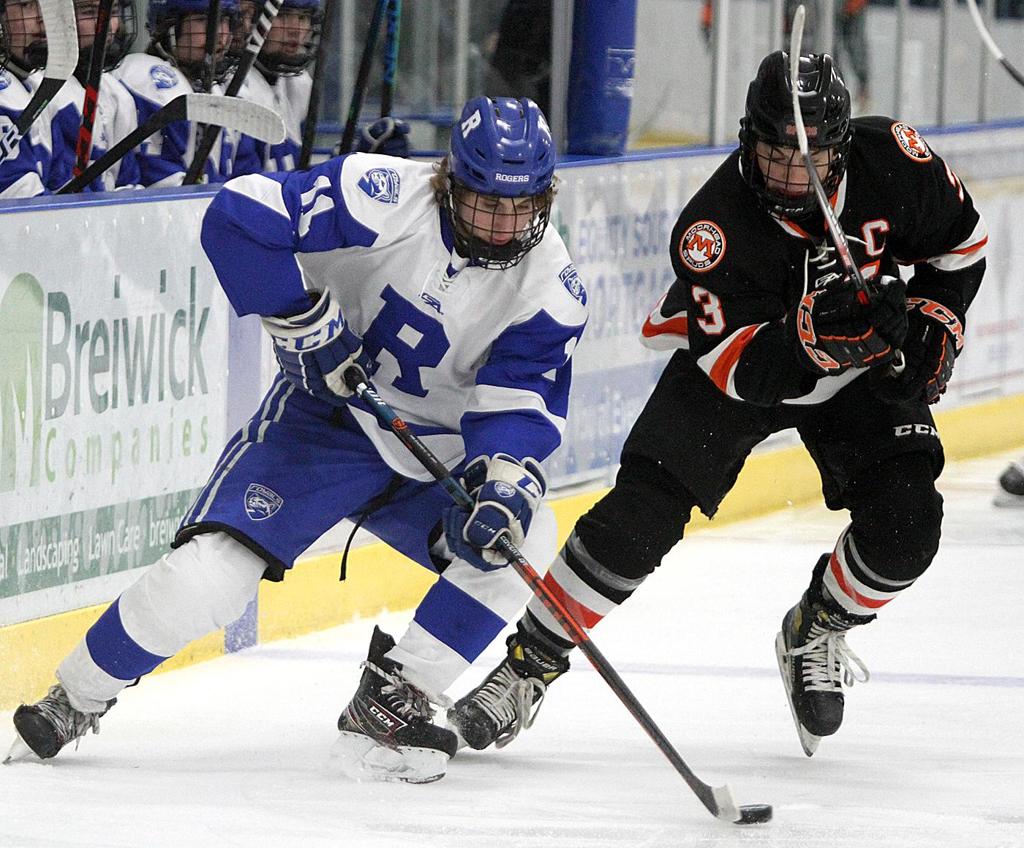 Trent Peluf handled the puck for Rogers, a No. 1 seed in its section tournament. DREW HERRON, Legacy Hockey

An already long bus ride home from Roseau to Rogers felt longer as the Royals contemplated a two-overtime loss in the Class 2A, Section 8 boys’ hockey semifinals last season.

Rogers is taking a new path this season. The Royals switched from Section 8 in greater Minnesota to the more local Section 5. And their 17-7-1 record helped earn the No. 1 seed and a first-round bye as section playoffs begin this week.

Led by a junior class whose members contributed to the state tournament-qualifying Bantam AA team two years ago, Rogers has created a buzz within the northwest metro community.

“People are slowly starting to realize we’re not just a team with upset potential,” third-year Royals coach Dave Brown said. “We can go toe-to-toe with the best teams in the state.”

Rogers, which opened in 2003, rose to prominence this season. The Royals went 11-0-1 against Northwest Suburban Conference teams and played a solid group of nonconference opponents such as Benilde-St. Margaret’s, Lakeville South, Minnetonka, Moorhead, Roseau, Warroad and Wayzata.

Forward Sam Ranallo and fellow junior captain Chase Cheslock “are the engines within our team that drive the bus,” Brown said. Ranallo leads the Royals in goals (23) and assists (31). Cheslock, a defenseman, posted 10 goals and 26 assists in the regular season.

Taking the top seed into the playoffs brings new challenges to a program not accustomed to the attention.

“We try to play the underdog as much as possible,” Brown said. “But at some point, our opponents aren’t dumb anymore

“On the other hand, this team is learning to hold itself to a high standard to meet those expectations.”

The top seed in Class 1A, Section 2, Minneapolis, seeks to put the state’s largest city in the state tournament for the first time since 1994.

The past eight seasons, the team never drew better than a No. 4 seed and never won a semifinal game. This year, the team without a nickname went 6-1-1 against section opponents.

Cretin-Derham Hall (21-3) ascended to the top of the Let’s Play Hockey coaches poll and received the No. 1 seed in Section 3 despite going 0-2 against second-seeded St. Thomas Academy (12-12-1) this season. The Raiders played the Cadets played twice before the holiday break, a relative eternity in high school hockey, and lost a third-period lead each time.

In Class 2A, Sections 2 and 6 won’t play the typical section final doubleheader at 3M Arena at Mariucci. Instead, the Section 2 final moves to Braemar Arena in Edina while Section 6 will be contested at Bloomington Ice Gardens. COVID-19-related restrictions prompted the venue change.