Alex Bump's four goals helped drive the Lakers past the Hawks and into their first ever state tournament. 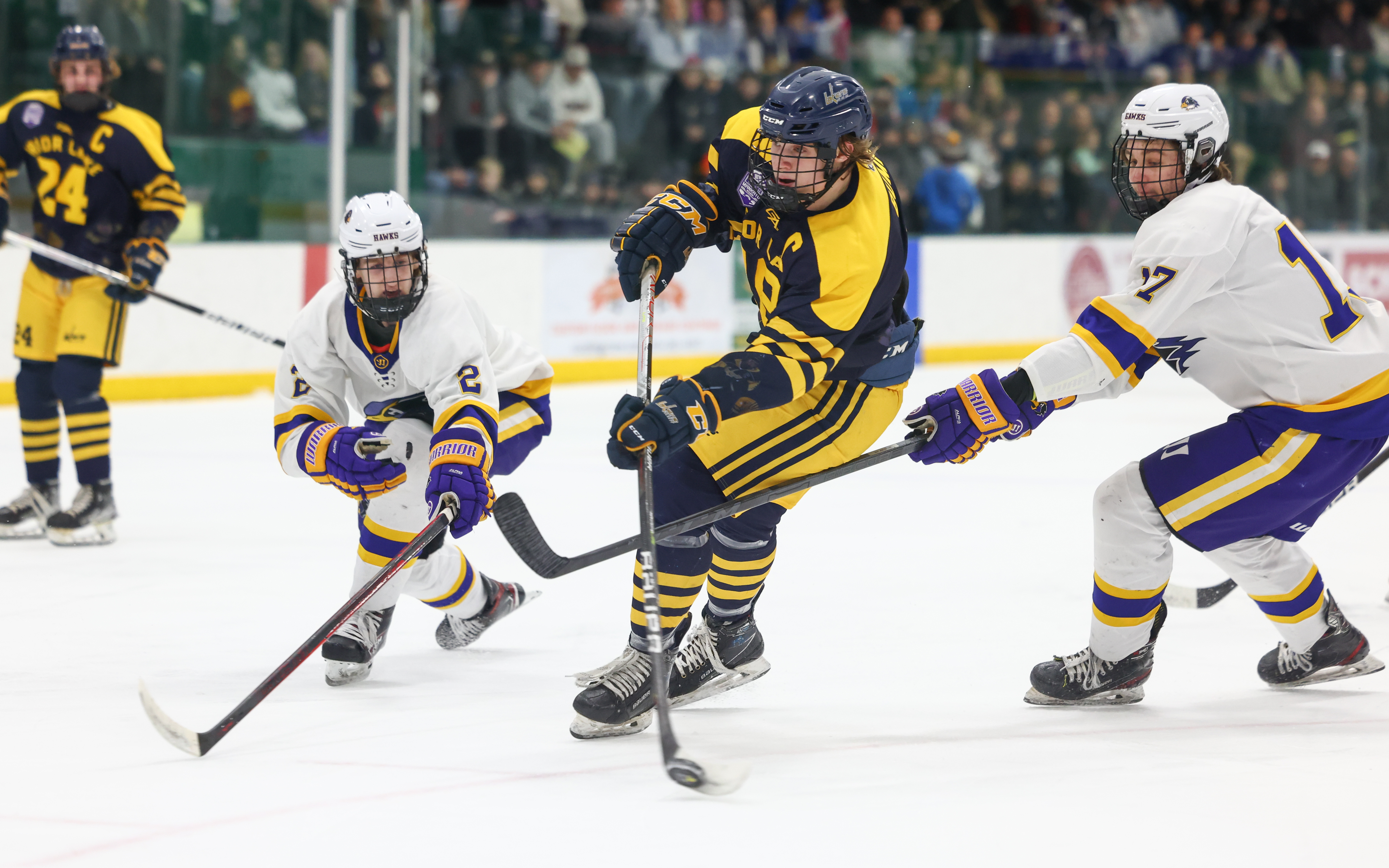 Prior Lake's Alex Bump gets off a shot against Chaska during Wednesday night’s Class 2A, Section 2 final. Bump scored four goals and added an assist in the Lakers’ 7-4 victory over the Hawks. Photo by Jeff Lawler, SportsEngine

Wednesday night before a packed and buzzing Braemar Arena in the Class 2A, Section 2 final, Prior Lake emphatically delivered that from its top line, a trio that combined for five goals, and another half dozen scoring chances.

Nobody greater than Alex Bump, the senior forward and Mr. Hockey finalist who is the captain on this Lakers’ team charting a new path to the Class 2A state tournament.

Prior Lake began playing hockey in 1974-75, but had never won a section, and only twice have they reached a final. Things are different now, as this group of Lakers tore through Class 2A, Section 2, emphasized by a 7-4 victory over Chaska (22-5) where Bump buried four goals and an assist. 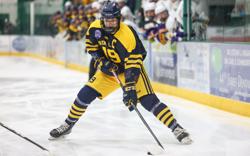 Photo Gallery: Prior Lake vs Chaska

“We’ve talked about it a long time, you need to have your studs to be studs, and we’ve got one,” Prior Lake coach Joe Pankratz said, pointing at Bump. “Bump, (Will) Schumacher and (Sam) Rice played a ton for us, and ate up a bunch of minutes, they scored five goals.

“Whether it’s NHL or high school or bantams or peewees, your studs need to be your studs.”

Bump, who finished the night with 41 goals this season and 74 points, scored nine seconds into the game on a quick wrister across the high slot that found the far top shelf. Later in the period, he won a puck race to the boards in the offensive zone, and executed a blind and perfect pass with his back turned that was delivered on the doorstep to a waiting Schumacher. Schumacher buried the back door punch, and Prior Lake led the first period despite being outshot 16-12, and yielding long periods of zone time to the Hawks attack.

It was the kind of goal that should be shared on social media.

“That’s me and [Schumacher's] chemistry right there,” Bump says. “I know where he’s going to be at any time, and it showed right there. I said I am going to wing it to the net, and he’ll be there.”

Schumacher and Bump connected again in the second, and Schumacher added his second between goals three and four from Bump, who finished his hat trick on a breakaway where he shot at the five-hole on Chaska goalie Carter Wishart.

It rained hats from the Prior Laker Student section, and while it wasn’t the first time Bump had seen that it might be the most memorable time.

The University of Vermont commit, part-time USHL player is top six amongst state leaders and is ranked No. 69 of all North American Skaters eligible for the 2022 draft according to NHL Central Scouting.

Bump, along with Schumacher both credit team chemistry for getting the Lakers to this point, having overcome a slow start and a losing record in early January.

“We’ve played with each other for so long, we feel like we can easily support each other,” Schumacher said. “We’re like glue, we like to stick by each other.”

Prior Lake (18-10) played Class 1A level until 2002-03, then moved up the following year. Only once had the Lakers moved past the semifinals. This year proved different, and this Prior Lake program is taking a step forward with a spot next week at the Xcel Energy Center at the big stage in Class 2A.

The players credit the support and community, support from alumni and former Laker players, the student section, and every other part of the growing Laker nation thrilled to collectively to go the tournament.

“The whole hockey community is here right now, and we are all doing this together,” Bump said. “They bring a lot of energy, and I don’t know if we’d have that same energy without them.” 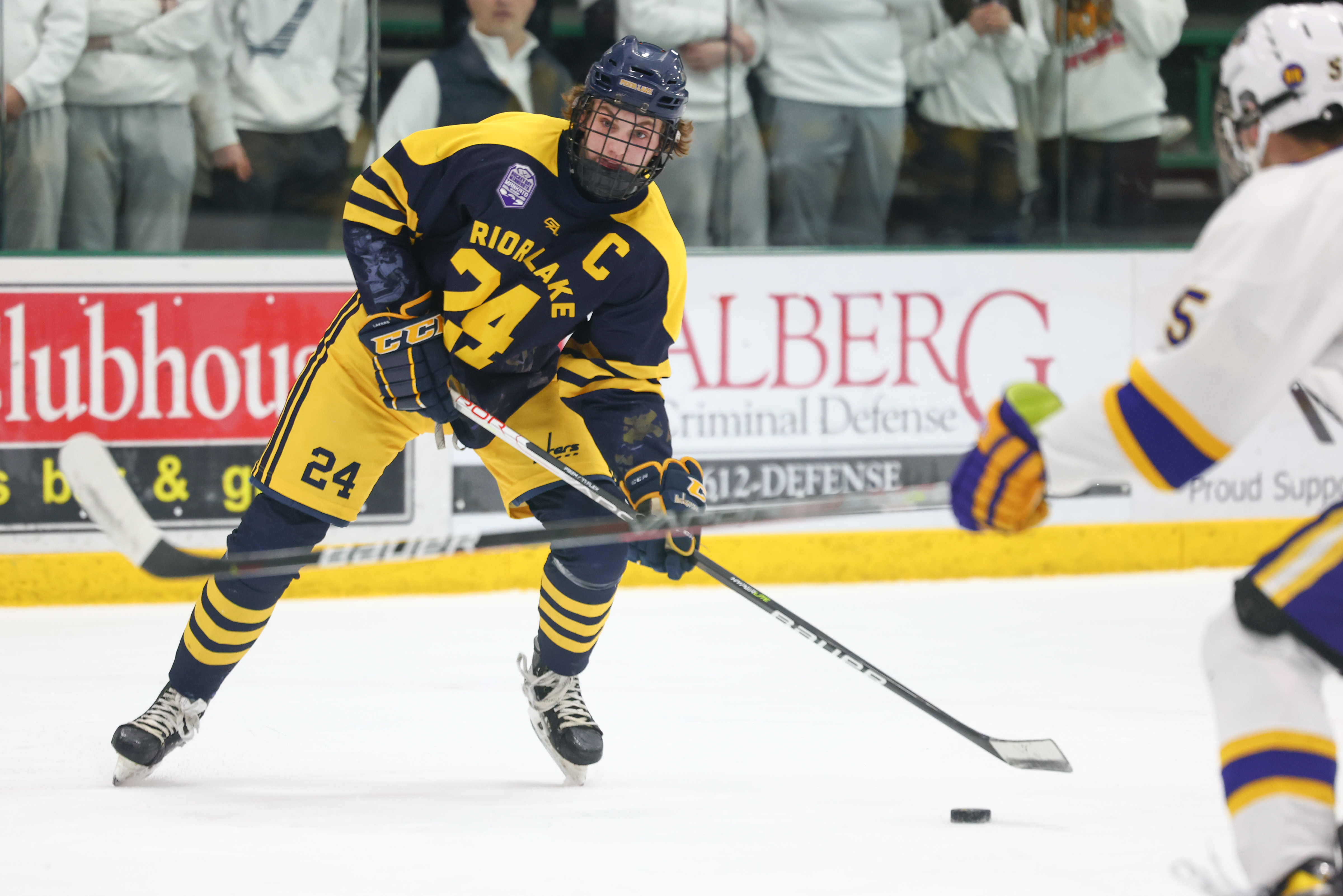 Prior Lake's Will Schumacher looks for an open shot against Chaska Wednesday night. Schumacher had two goals and an assist in the Lakers’ 7-4 victory over the Hawks at Braemar Arena. Photo by Jeff Lawler, SportsEngine

Alex Bump scored four goals and set up another to help lead Prior Lake past Chaska 7-4 in the Class 2A, Section 2 final Wednesday night at Braemar Arena.

Bump, a Mr. Hockey award finalist, needed just nine seconds to put the Lakers out front after burying a top-shelf wrist shot a short time after Prior Lake had won the opening draw and gained the offensive zone. From there, the No. 4-seed Lakers never trailed and weathered third-seeded Chaska’s pushback in the second before pulling away in the third period.

Bump completed the hat trick with 10:36 left in the third when he skated in on a breakaway, and deftly slipped a well-placed backhand between the pads to set the tone the rest of the way, leaving Chaska to chase.

In the closing minute, Bump nabbed an empty-netter for his 41st goal of the season and 75th point.

The Lakers (18-10) qualify for the state tournament for the first time in its history, an existence that dates back nearly 50 years to 1974-75.

Chaska’s Sam Rinzel finished with a goal and two assists to lead the Hawks (22-5). 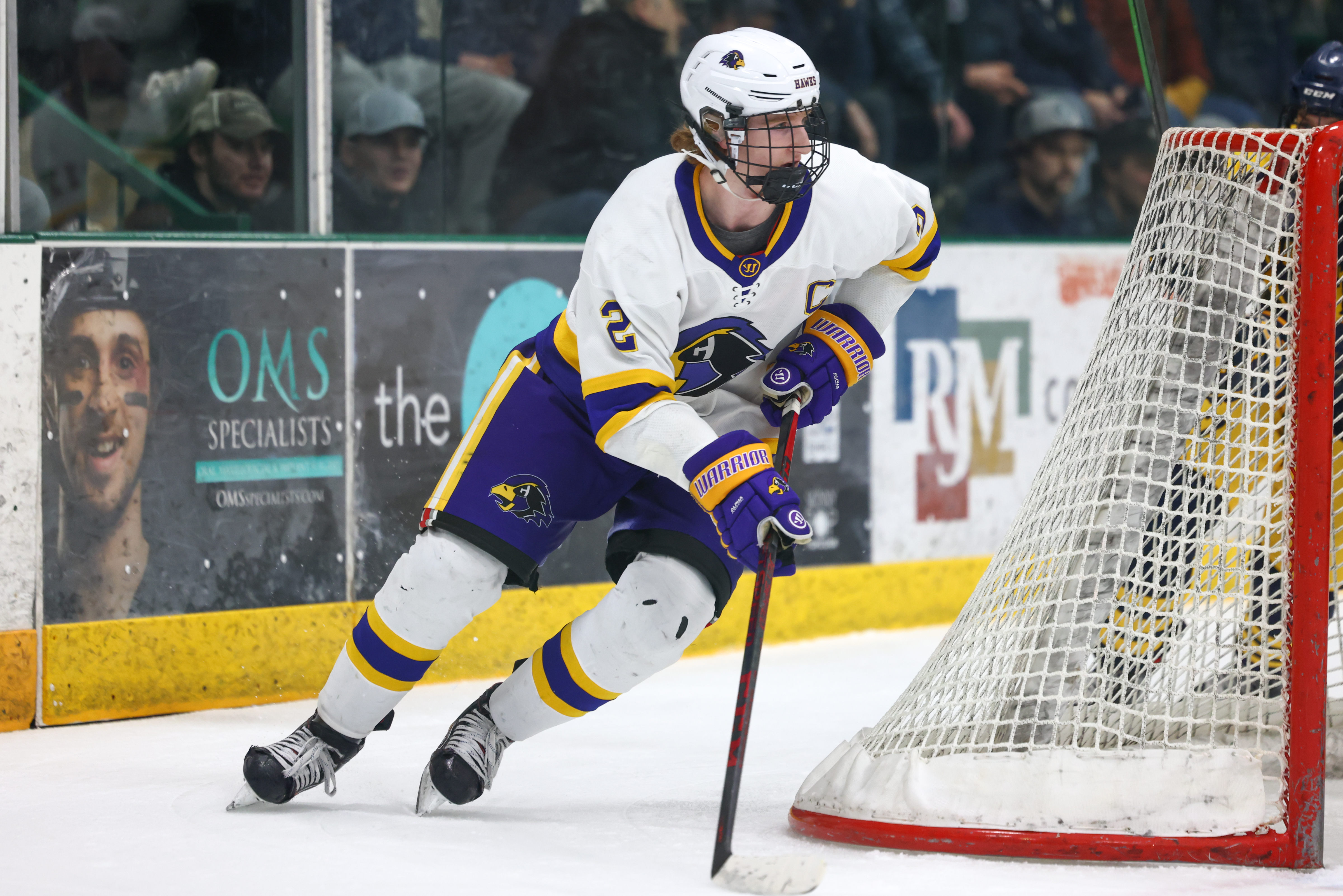 Chaska's Sam Rinzel circles behind his own net during the first period of Wednesday night’s Class 2A, Section 2 final matchup against Prior Lake. Rinzel had a goal and two assists in the Hawks’ 7-4 loss to the Lakers. Photo by Jeff Lawler, SportsEngine