Trending toward tournament time: Hill-Murray snags the top seed in Class 2A

Cretin-Derham Hall is second in the big class. Hermantown receives the No. 1 spot in Class 1A. 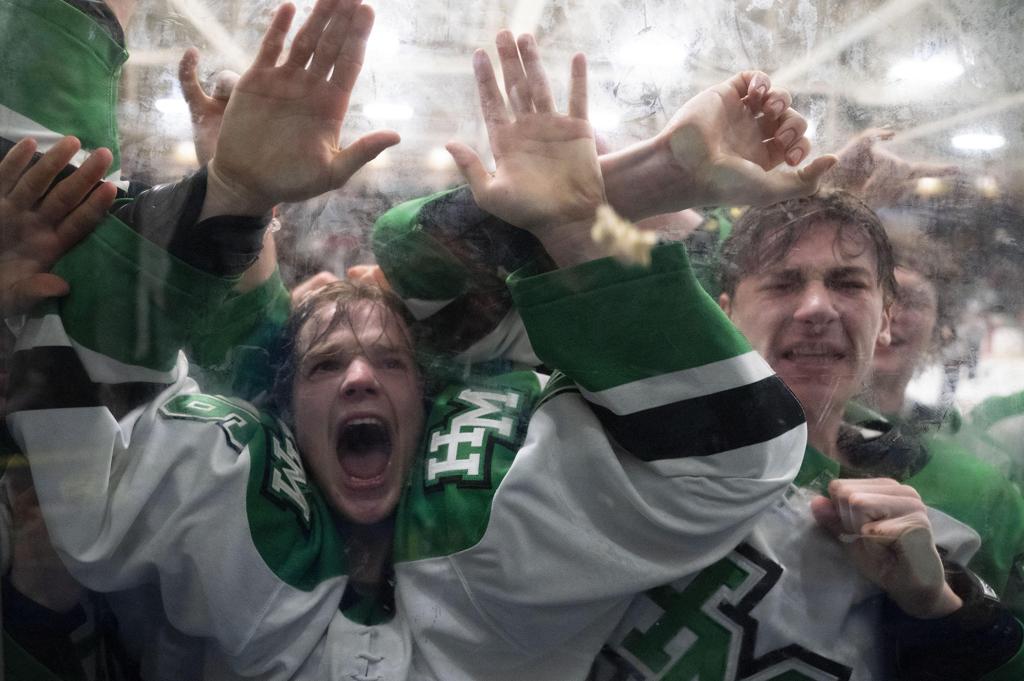 Hill-Murray players rushed the boards by the student section to celebrate their 5-0 win over White Bear Lake on Friday in a section final. Photo by ALEX KORMANN, Star Tribune

Matt Funk said he and fellow Cretin-Derham Hall coaches shared their hopes for a Hill-Murray section championship game victory Friday to ensure “all the very best teams would be in the state tournament.”

Careful what you wish for.

The Pioneers indeed won, then Saturday morning grabbed what Funk thought should be his team’s No. 1 state tournament seed. The festivities begin Wednesday, when the Class 1A teams take the Xcel Energy Center ice for the quarterfinals. On Thursday, Hill-Murray, Cretin-Derham Hall and the other six Class 2A teams get started.

Receiving the No. 2 seed isn’t all bad news for Cretin-Derham Hall, playing in its first state tournament since 2009. Logistics are quite favorable. The Raiders play at 11 a.m. against state tournament newcomer Prior Lake in the first quarterfinal.

“You’re not waiting around all day, which is nice,” said Funk, who in 2016 brought St. Paul Academy to the 1A tournament.

A Cretin-Derham Hall victory would mean playing at 6 p.m. Friday instead of the later semifinal, which often starts around 8:30 p.m.

First things first, however. Unseeded Prior Lake boasts arguably the state’s best forward line. The Lakers are an example of why the 2022 state tournament is considered a more wide-open affair.

On Saturday morning, each head coach cast electronic votes for the other seven qualifying teams. The highest and lowest votes for each team were excluded and the top five teams were awarded seeds. The remaining three teams were placed by blind draw. This year, the teams without a seed are No. 9 Lakeville South, No. 10 Edina and Prior Lake. They went a combined 63-21 this season.

Curt Giles said he and fellow Edina coaches also talked Friday about the daunting task ahead regardless of whether they were seeded. The Hornets went a combined 4-3 against six teams in the 2A bracket. They open play at 1 p.m. Thursday against No. 3 seed Maple Grove. Edina beat the Crimson 6-5 in the season opener.

“We’ve seen basically everyone,” Giles said. “So, as we were talking about an ideal situation, we couldn’t come up with one. There are eight good teams but no dominant, undefeated team. I think most coaches are looking at this and saying, ‘We can win this thing.’”

Hill-Murray, which qualified for state last year but missed out because of a COVID-19 exposure, drew Lakeville South, a team one shot away from winning the title last year in double overtime.

Thursday’s last quarterfinal features No. 4 Moorhead and No. 5 Andover. The Spuds beat the visiting Huskies 6-1 on Dec. 3.

In Class 1A, Hermantown earned the top seed, followed by Warroad, Mahtomedi, Minneapolis and Alexandria. Minneapolis, the city’s first public school program representative in the state tournament since 1994, will play Alexandria at 8 p.m. Wednesday.