Grittier now and smooth as ever, Cretin-Derham Hall’s Drew Fisher is the Metro Player of the Year

A senior forward, he made himself more important than his 28 goals and 31 assists by blocking shots, backchecking and being “a different Drew.” 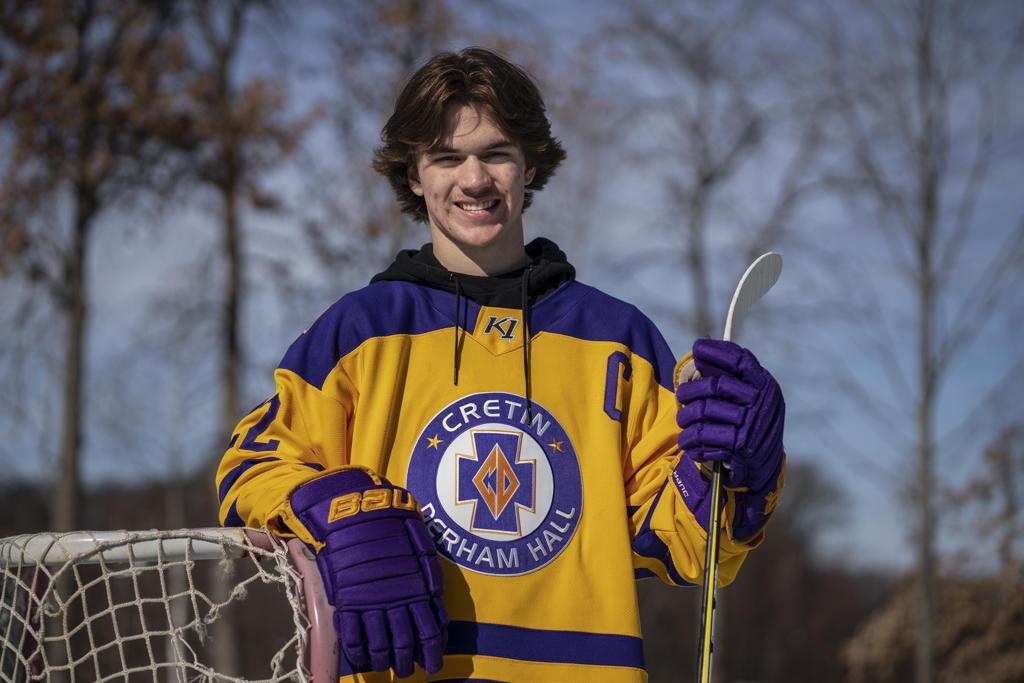 Drew Fisher, in the middle of the action in January. Photo by Drew Herron, SportsEngine

He’s now Fisher the check finisher, making himself an asset even without the puck, or Drew the determined, throwing himself at opponents and blocking shots.

He kept his scoring touch, too. Fisher’s career highs in goals (28) and assists (31), combined with his grit and intensity, are big reasons top-ranked Cretin-Derham Hall reached its first state tournament since 2009.

Fisher is the Star Tribune Metro Player of the Year.

Funk’s favorite Fisher performance came in an early-February victory against Eden Prairie. Despite finishing with zero goals or assists for just the third time all season, Fisher’s effort plays paced a 1-0 victory.

“When the top players are blocking shots or hitting guys, it’s contagious,” said Fisher, a two-time team captain. “Our downfall the past couple years has been our physicality. We tended to think we could beat people just with our skill and speed. This year, we’ve come to realize we have to play differently in the playoffs, more gritty.”

Fisher is one point shy of averaging two per game in his three seasons of varsity hockey. He plays right wing on a line with brother Jake, who ranks second on the team with 23 goals and 29 assists. Their father, Tony, a 1993 Cretin-Derham Hall graduate and standout baseball player, offered a different perspective on defining hockey success.

“He taught me to appreciate the things I do beyond scoring goals,” Fisher said. “He says, ‘You can have a great game without scoring points if you block a bunch of shots, hit a bunch of guys and backcheck your butt off.’”

Five days after the Eden Prairie victory, Fisher put together what he called his best game this season in a 4-1 victory against Stillwater. He played tough without the puck and added a goal and assist. Fisher recalled Funk’s challenge after the regular season’s penultimate game.

“He pulled me aside and said, ‘I want you to have a Charlie Strobel-type playoff run,’” Fisher said.

Fisher accepted the challenge. In the Section 3 semifinal game against Rosemount, he scored shorthanded to give the Raiders a third-period lead they would not relinquish. And he solidified the victory by blocking a shot, corralling the loose puck and filling the empty net.

The puck he took from the point in the abdomen didn’t leave a mark, but Fisher’s courage made an impression.

“I said to the team afterward, ‘If you would have told me three years ago that in the section semifinals Drew Fisher was going to block a shot that would lead to an empty-net goal to clinch the game, I would have said you’re crazy,’” Funk said.

In the section final against Eastview, Fisher gave his team a 1-0 lead with his tenacity. He outbattled a Lightning defender near the net, fought his way to a rebound and scored on his second swipe at the puck.

“That was 100 percent the new Drew,” Funk said. “He never was a prima donna, but he always went to the top of the slot or shot from the perimeter. Now he’s going to those gritty spots.”