Notes: Dwindling participation at Johnson leads to talk of the future of St. Paul hockey

Options involving a co-operative program are to be discussed at a meeting Monday, and community input is sought. 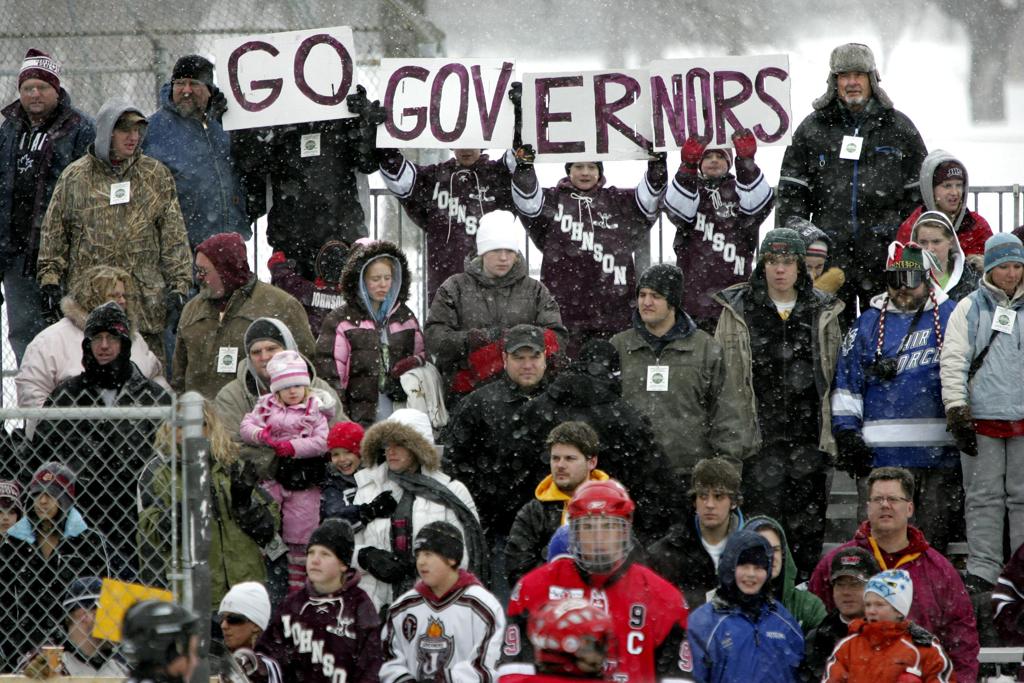 St. Paul, home to the boys’ hockey state tournament since 1945, might be losing a public school program with an even longer history.

While player numbers at Highland Park are solid, longtime Johnson coach Steve “Moose” Younghans said his program has reached a critical point. The Governors lose eight seniors from their 18-man roster. Younghans said only “seven or eight” players are currently expected to come in next season.

Options for the future include a co-operative between Highland Park and Johnson or a consolidation akin to what’s happened in Minneapolis, where there is one team for its seven public schools. This week Minneapolis made the first state tournament appearance by a team representing the city public schools in 28 years since Edison advanced.

“Our youth association numbers are good, not so much with Johnson’s numbers,” Auran said. “If we absorb them and we have to make cuts of our players, that’s political suicide.”

Then there are logistical concerns. Johnson plays at Gustafson Phalen Arena behind the school. Auran said the Scots are “second fiddle to Cretin-Derham Hall” at the neighborhood Charles M. Schulz-Highland Arena in terms of preferred ice time.

Highland Park revived its program, dormant since 1987, in 2008. Players come from there and nearby Central. Johnson draws players from the Como area.

On the girls’ side, St. Paul co-ops with Two Rivers.

Trevor Boschee’s name won’t be found on a list of players with college commitments or among the finalists for the Frank Brimsek Senior Goalie of the Year Award. He had to settle for a state tournament shutout and the respect of his Prior Lake teammates.

Alex Bump’s five goals in a 6-0 quarterfinal upset of No. 2 seed Cretin-Derham Hall drew the headlines. More than a footnote, Boschee’s 22 saves and fourth shutout of the season gave the Lakers peace of mind.

“Boschee stopped every puck he saw; I think that was a huge one,” Prior Lake coach Joe Pankratz said. “Gives our team confidence when he’s back there solid. He needed to make some nice saves in the first period, he did that.”

Returning the love, Boschee said: “It’s really nice to see your team just get the puck deep early and kind of start dominating early. Because that kind of gives you a good mental state.”

Unlike some of his teammates, Hill-Murray junior goaltender Jack Erickson hadn’t played in a state tournament game before. He’s in his second varsity season, but Pioneers forward Dylan Godbout and others won the 2020 Class 2A championship.

Erickson displayed his glove skills with the save of the night to keep his team up by a goal in the third period of Thursday’s quarterfinal. Erickson said he was just trying to save anything that came at him, “trying to stop the puck.”

After the sprawling save, cameras caught the stunned-with-excitement reactions of the Hill-Murray student section. Hill-Murray players took time between faceoffs to congratulate the netminder for his efforts.

“I just hugged him as hard as I could,” Godbout said. “Because I was just so dang proud of him.

“He was our backup goalie at the beginning of the year. Now he’s our starter. I think he’s one of the best goalies in the state. He bails us out at times, like he did there. I’m super proud of him, and he had a great game.”

Erickson made 32 saves for his 17th win of the season.

Minneapolis back to winning

The Minneapolis co-op team recovered nicely from its defeat in the Class 1A quarterfinals by Alexandria, breaking open a third-period tie with three goals to defeat New Prague 5-2 in the consolation bracket at 3M Arena at Mariucci. Jack Hanson scored both of the Minneapolis goals in the first period, and Caden Lacher scored all three in the third — the tiebreaker with 11:46 to play and an empty-net goal with 16 seconds left.

Minneapolis, the first city public school in the tournament since Edison made it in 1994, will play Monticello, a 3-1 winner over Mankato East, at 9 a.m. Saturday at Mariucci Arena