Zam Plante scores twice, then Hermantown clamps down to defeat Warroad 3-2 for 1A title

It's the fourth state championship for the Hawks in 18 tries and their first since 2017. 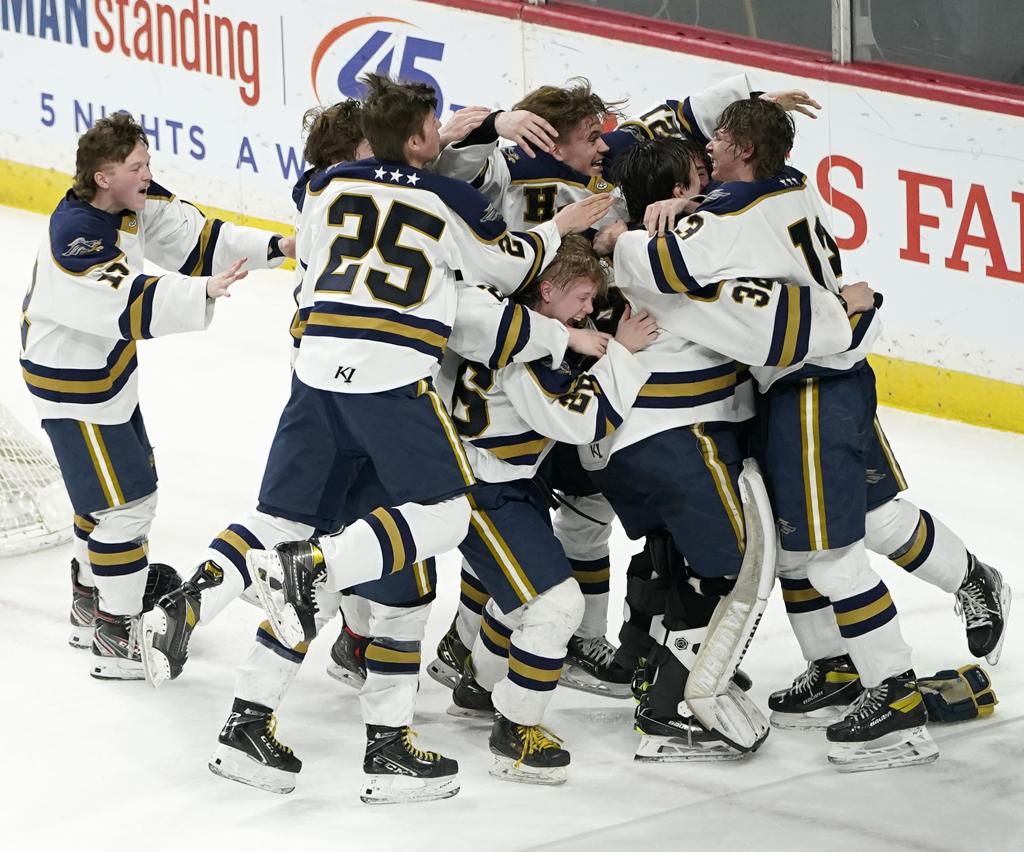 Hermantown's players formed a happy heap soon as they had secured the Class 1A championship. Photos by DAVID JOLES, Star Tribune

Patrick Andrews grew up in the Hermantown hockey program, starting when he was 4 years old and graduating in 1998. He didn’t win a state title as a player, but Andrews won his first state championship as Hermantown's head coach Saturday.

“I said, ‘This is the greatest honor of my life to be able to put this helmet on as a state champion as a coach,’” Andrews said.

Hermantown (29-2-0) won its fourth state title in 18 trips to the state tournament and a dozen Class 1A finals. The Hawks last won in 2016 and 2017, the final seasons for longtime Hermantown head coach Bruce Plante.

Saturday, two of Plante’s grandsons took the ice for the top-seeded Hawks: junior Zam Plante and sophomore Max Plante, brothers who sat in the Xcel Energy Center seats for years watching the Hawks finish as the runner-up.

“I’ve been watching it since I can remember, since my grandpa was coaching,” Zam said. “Second place, second place, finally got two at the end. And to finally get to do it myself is the best feeling in the world.”

The duo skates on a line together and led their team in scoring this season. Zam scored a pair of goals in the title game, although defense was the name of the game for Hermantown.

“That won that game,” Andrews said. “Our emphasis on team defense, our unbelievable defenders.

“And then obviously Zammy and his line … but it’s not just the offense. They play 200 feet and shut them down.”

Before the defense took over, goal scoring came in bunches. Warroad struck first with Garrett Hennum’s fourth of the season in the first period. But Hermantown senior Dominic Thomas answered 1 minute, 31 seconds later with a wraparound goal.

Hermantown’s defense stifled the Warriors from there, holding them to 10 shots across the final two periods and only three in the third.

“We like to get up and go and score goals,” Hardwick said. “And they made it very difficult for us, both how they played defensively and then just the way they stretched it a little bit and came with speed in the offensive end.”

BY THE NUMBERS
2
Losses this season for Hermantown, both coming against Class 2A state tournament entrants in Cretin-Derham Hall and Maple Grove.
4
State championships for Hermantown in 12 appearances in the state title game.
61
Total points for Zam Plante in 22 games this season, after missing time because of injury. He scored 24 goals, including two Saturday.