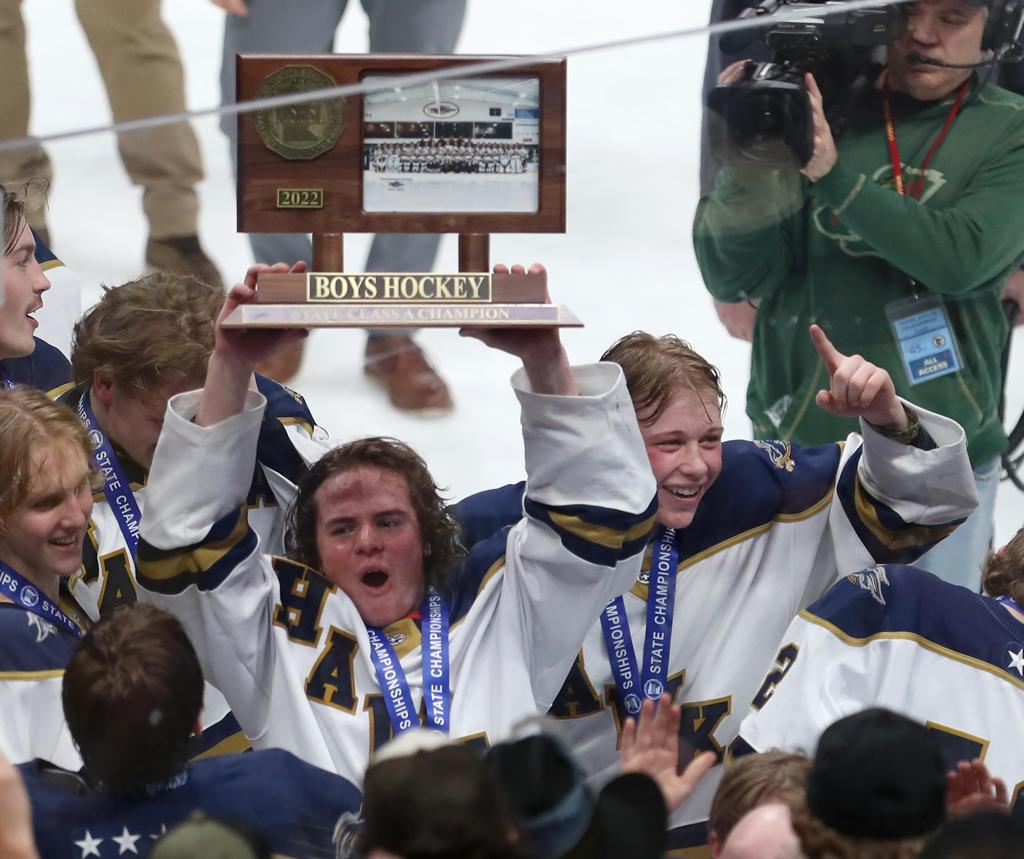 Hermantown’s Ty Hanson hoisted the hardware after the Class 1A title game, and that trophy traveled right into the postgame news conference. Photo by DAVID JOLES, Star Tribune

As commonly happens with a championship team, Hermantown players Zam Plante, Beau Janzig and Ty Hanson walked into the postgame news conference Saturday in Xcel Energy Center wearing championship gold medals around their necks. They also brought the Class 1A championship trophy with them, setting it on the table before they fielded questions from reporters.

But there was also some style, if you will, at each end of the table. Plante, fresh off his two-goal performance that helped his team to a 3-2 victory over Warroad, wore a black cowboy hat. It led to a lighter moment, ending with laughter all around.

Hanson jumped in quickly with: “He thinks he’s a cowboy.”

Cue the laughter along the table and in the room.

Hermantown coach Patrick Andrews also came in wearing a Hermantown tradition: the pink bicycle helmet given the MVP of the game. Andrews set the helmet on the table in front of him while he fielded questions, before putting it back on his head at the conclusion to indulge a couple of reporters seeking photographs.

Andrews coached in his fourth state tournament this year, winning his first state title. With Bruce Plante coaching, Hermantown played in eight consecutive state title games from 2010-17, finishing with back-to-back titles in 2016 and 2017.

“I think ’18 was the hardest,” Andrews said. “Because it broke that streak of championship games, and you’re the first-year head coach. And after that, you’ve just got to own it and try and do your best. When you have guys like this, it makes it pretty easy.”

Hermantown lost to Alexandria in the 2018 semifinals and took third place in that tournament in Andrews’ first season behind the bench.

Don’t use the word redemption around Hermantown coach Andrews.

Yes, his Hawks won the Class 1A state championship. Yes, they lost in the quarterfinals last year in large part because a COVID-19 exposure decimated the varsity roster.

Linking the two and calling it redemption, however, doesn’t sit right with Andrews considering the worldwide suffering and death caused by the pandemic.

While sad for the seniors in the Class of 2021, who made a state tournament title their mission, Andrews took a larger view.

“I don’t think it was redemption,” he said. “I think we all lost something the last two years.

Top seed Hill-Murray ended its season with a 3-2 overtime victory against Prior Lake. The Lakers started fast on Alex Bump’s seventh state tournament goal. In overtime, the Pioneers’ Brendan Bonin scored the winner.

Mahtomedi overcame an early deficit to Alexandria in a 4-2 victory for the Class 1A third-place trophy.

Brycen Berg got the Cardinals out to a 1-0 lead. Mahtomedi countered with three goals in the final two minutes of the opening period. Nicholas Beiersdorf, Cav Bruner and Jonathon Grove gave the Zephyrs a lead they would not relinquish.

A two-goal Moorhead lead came undone as Edina escaped with a 3-2 overtime victory in the Class 2A consolation championship game.

Gavin Lindberg, a Mr. Hockey Award finalist, gave the Spuds a 2-0 lead in the second period. But Edina rallied. Jackson Nevers scored twice, including the winner in overtime.

Warroad senior forward Matt Hard received the Herb Brooks Award for Class 1A, and Andover senior defenseman Weston Knox received it in Class 2A. The award is given to players who best represent the legendary hockey coach’s values and character.